Keir Starmer’s leadership was in crisis last night after police launched an investigation into ‘Beergate’.

Durham Constabulary said they were opening a fresh inquiry into the notorious event when Sir Keir was filmed enjoying a late-night beer with party activists during lockdown.

The move is a humiliation for the Labour leader, who called on Boris Johnson to resign in January after police launched an inquiry into claims of lockdown-busting events in No 10. 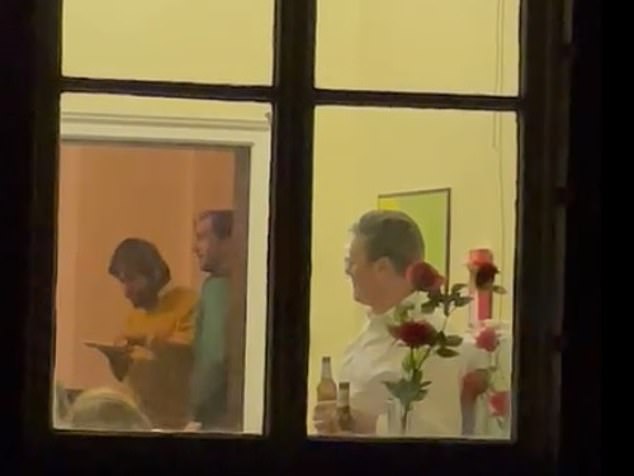 Sir Keir was pictured with a bottle of beer with activists during lockdown on April 30, 2021

In a tweet, he said: ‘Honesty and decency matter. He needs to do the decent thing and resign.’

How Labour called for PM’s head

Sir Keir Starmer, who has repeatedly called for Boris Johnson to resign over Partygate and the Met’s investigation of Downing Street parties, has been left eating his words after Durham police announced it would reinvestigate a bash attended by the Labour leader.

On January 12, Sir Keir told the Commons: ‘[Mr Johnson] has finally been forced to admit what everyone knew – that when the whole country was locked down, he was hosting boozy parties in Downing Street. Is he now going to do the decent thing and resign?’

The day the Metropolitan Police announced it had opened an investigation into Partygate on January 25, Sir Keir was joined in his chorus of condemnation by deputy Angela Rayner, who said: ‘Boris Johnson is a national distraction. Conservative MPs should stop propping him up and he should finally do the decent thing and resign.’

The Labour leader repeated this call the following day, telling the Commons: ‘The ministerial code says that: “Ministers who knowingly mislead Parliament will be expected to offer their resignation”. Does the Prime Minister believe that applies to him? I think the Prime Minister said yes. Therefore, if he misled Parliament, he must resign.’

City of Durham Labour MP Mary Foy, in whose constituency office the bash in question was held, tweeted on April 19: ‘Boris Johnson says he has made changes in Downing Street, so we should move on from Partygate. I won’t move on … until the lawbreaking charlatan resigns. Every day he remains in office is a national disgrace.’

Last night critics were asking whether Sir Keir and Mrs Rayner, both now the subject of a police investigation, would abide by their own high standards.

Sir Keir ignored questions yesterday about whether he would adhere to his own standards and quit – insisting only that he had not broken the rules.

But a Cabinet source said Sir Keir had been ‘hoist by his own petard’, adding: ‘Who would have guessed that the holier-than-thou saint would turn out to be a total hypocrite?’

Culture Secretary Nadine Dorries told the Daily Mail: ‘For three months, he attempted to divert the Government’s attention away from important and pressing issues such as the cost of living and the war in Ukraine by continuously calling for the PM to resign for nothing more than being investigated.

‘Do his inappropriate and repeatedly shrill-voiced standards apply to himself as well?’

One Labour backbencher branded Sir Kier’s actions in Durham ‘indefensible’ – telling PoliticsJoe they would refuse media interviews to avoid having to defend the party’s embattled leader.

A political adviser to Sir Keir added: ‘It’s a relief Durham police aren’t handing out retrospective fines. Because we would probably get one.’

Yesterday’s police intervention follows a string of revelations by the Mail about what really happened when Sir Keir gathered with MPs and officials in Durham Miners Hall on the night of April 30 last year.

The body blow for the Labour leader came as:

Last week this newspaper revealed that, despite denials stretching back three months, Labour deputy leader Angela Rayner was also present at the drinks in the Miners Hall. 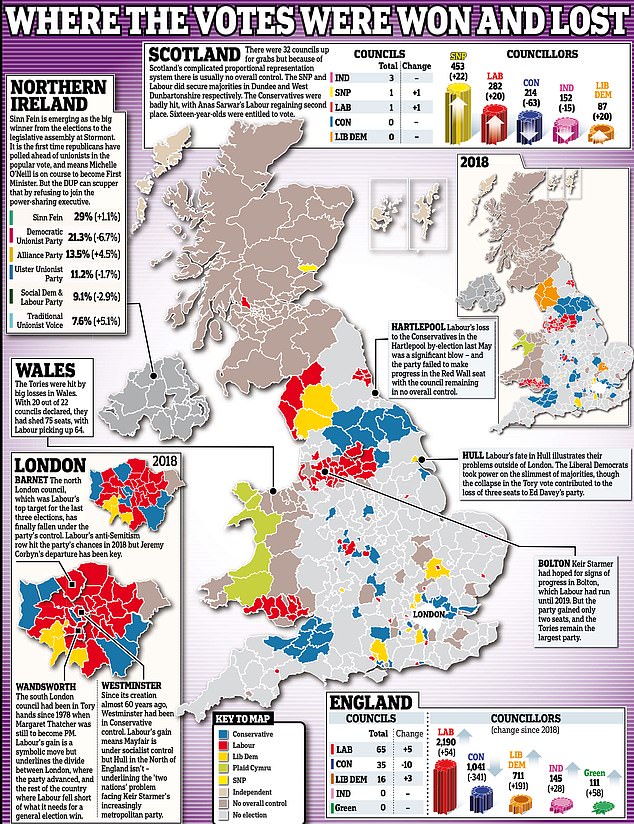 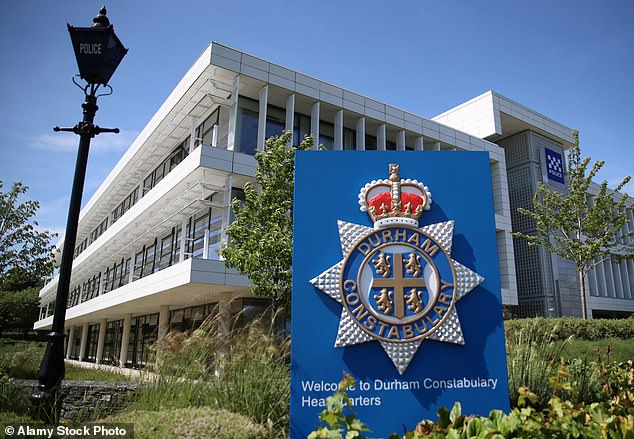 Mrs Rayner, who also called for the PM to quit following the launch of the Partygate probe, is now likely to face questions from the police and face pressure to resign. The police initially rejected calls to investigate after reviewing a 43-second video filmed by a passer-by.

Mr Corbyn, who has been denied the Labour whip after being suspended in 2020, refused to say if Sir Keir should resign.

He told LBC: ‘I don’t want to comment on what the outcome of (the investigation) would be, but obviously, it’s serious.’

But in a statement yesterday, the force said: ‘Following the receipt of significant new information over recent days, Durham Constabulary… can confirm that an investigation into potential breaches of Covid-19 regulations relating to this gathering is now being conducted.’

Labour said Sir Keir, Mrs Rayner and others present would co-operate with detectives. In a brief statement to reporters, a shell-shocked Sir Keir said: ‘I understand the police need to do their job, we need to let them get on with that but I’m confident there was no breach of the rules.’

Privately, Labour insiders acknowledged that Sir Keir might have to resign if he is fined, having repeatedly called for the PM and Rishi Sunak to quit when they were fined £50 over a brief so-called ‘birthday party’ in the Cabinet room.

One Labour MP said the decision by Sir Keir and Mrs Rayner to push so hard for the PM to quit had ‘come back to bite them’.

Tory MP Richard Holden, who led calls for police to reopen their investigation, declined to call explicitly for the Labour leader to quit, but said: ‘Keir Starmer should hold himself to the same moral standards he has talked about. It should be his words that hang him.’

By Jason Groves and Richard Marsden

Durham Constabulary finally announced it would reopen its investigation into ‘Beergate’ yesterday following days of revelations in the Daily Mail and pressure from Tory MPs.

Citing ‘significant new information’, the force yesterday said it had reviewed its initial decision to take no further action and would now launch a probe which could see the likes of Sir Keir Starmer and his deputy, Angela Rayner, forced to answer questions.

The Beergate event at Durham Miners Hall on April 30 last year was placed into the spotlight in January when a now-infamous image of Sir Keir drinking beer with Labour colleagues was published on the front page of the Mail after he criticised alleged lockdown-breaking parties in No 10.

What the police will probe

Was it ‘necessary for work’?

At the time, indoor socialising was banned in England. Indoor meetings during the local elections campaign were exempt if they were ‘reasonably necessary for work’. But the guidance was to ‘not meet with other campaigners indoors’ and to keep interactions to a minimum.

Labour has refused to say how many people attended the event, but a restaurant reportedly delivered £200 of curry, with a source suggesting it was shared by 20-30 people. Sir Keir said it was a buffet-style meal – but employers were advised that staff from different households should not share food and drink.

Did work continue after dinner?

Sir Keir has said he went back to work after the meal, which took place after 10pm on a Friday. But Labour has yet to produce evidence of any work done later by attendees. Sir Keir has cited an online event and video clips. But these appear to have been carried out earlier.

Labour spent months denying deputy leader Angela Rayner was present, telling the Daily Mail in January that she was not there. The party only admitted she was present last week when faced with video evidence. Sir Keir has also changed his story about whether the group worked throughout the meal or took a break.

Was there any alternative?

Sir Keir said ‘all restaurants and pubs were closed so takeaways were really the only way you could eat’. But the hotel he was staying at served food outdoors until 9pm and offered room service. Local media reports suggest 13 nearby outlets were serving food outdoors.

It is understood detectives have changed their position in the light of Mail investigations. And this newspaper can reveal the force confirmed its decision to reopen an investigation a day after receiving a formal complaint from a Durham county councillor who lost his mother in the pandemic.

Paul Sexton, who sits as an independent, asked it to reconsider as ‘people in positions of power think they are above the law’.

They are to focus on the revelations that there were many more people than Labour had originally suggested and that the takeaway meal ran to a hefty £200.

There were also misleading claims that no other restaurants in the area were open at the time.

An image of what may have been Sir Keir’s official car led to suggestions that police protection officers may have witnessed the events.

Back in January, the Labour leader dismissed allegations of hypocrisy and said the event bore ‘no comparison’ with gatherings attended in Whitehall during lockdown by Boris Johnson.

Sir Keir said he and colleagues had stopped for something to eat and carried on working which was ‘perfectly normal’ under rules at the time which banned indoor socialising unless for work.

The row was reignited last month when Conservative MP for North West Durham Richard Holden wrote to Jo Farrell, the chief constable of Durham Constabulary, expressing concern that the Met Police had issued a fine to the Prime Minister over Partygate but officers in Durham had concluded no further action was warranted against Sir Keir.

On April 28, the Mail revealed that a 43-second video of Sir Keir and others drinking at the constituency office of City of Durham MP Mary Foy showed a number of people eating with the leader who was drinking from a bottle of San Miguel. The casual nature of the event appeared to contradict claims of a ‘work meeting’.

It can now be revealed that the room in which Sir Keir and six others were filmed chatting is a small kitchen where social distancing would have been impossible.

The following day, the Mail produced bombshell evidence showing that Labour deputy leader Mrs Rayner was also at the event – despite previous denials.

Labour went on the defensive, insisting the denials had been an ‘honest mistake’ but the slip-up prompted widespread coverage across the BBC and Sky as well as left-leaning publications including The Independent.

On May 2, further questions were raised over Labour’s account of the evening after a takeaway delivery driver said he had delivered a ‘big order’ to about ‘30 or so people’. Reports suggested attendees had ordered £200-worth of food.

In a series of broadcast interviews, Sir Keir failed to deal with questions over Beergate – including refusing to answer three times if police had been in touch since the incident resurfaced. He later said they had not. As further allegations emerged, Durham Constabulary repeated its earlier stance that it did not believe an offence had occurred but it said it was examining the subject.

Shadow minister Emily Thornberry claimed Durham police reopened their investigation because of pressure from ‘Conservative-supporting newspapers’ and Tory MPs. Durham Constabulary yesterday declined to comment on the nature of the new information. The investigation is likely to see Sir Keir questioned – probably in the form of questionnaires.

If he or Mrs Rayner are found to have breached the Coronavirus Act 2020, they could be issued with a Fixed Penalty Notice. A Labour Party spokesman said: ‘We’re obviously happy to answer any questions there are and we remain clear that no rules were broken.’