Landscaper, 52, set up spy camera and secretly filmed woman in bathroom for three years before her boyfriend found it hidden in a toilet bag facing shower

Landscaper Steven Aitchison, 52 (pictured), is facing jail after it was discovered he had set up a camera in a bathroom and secretly recorded a woman as she showered and changed over three years

A landscaper who secretly recorded a woman for three years after he set up a spy camera in a bathroom is facing jail.

Steven Aitchison, 52, operated the concealed device and recorded hours of invasive footage as the woman showered and changed.

Aitchison, of Blantyre, Lanarkshire, hid the device in a bag and left it in the toilet of a house.

His horrified victim – who cannot be named for legal reasons – only discovered she had been filmed after the camera was found by her boyfriend.

They left it untouched but searched the property in Motherwell the following day and found it among Aitchison’s belongings.

The camera’s memory card had no recordings but when they continued investigating they found two hard drives with dozens of clips of the woman showering.

A laptop was also found that contained photos of the woman who was 23 when the shameful actions began.

Aitchison, a former fireman, was confronted about the warped discovery and admitted it had been going on for three years.

Police were called and shamed Aitchison admitted recording the woman between September 2015 and September 2018.

He has appeared at Hamilton Sheriff Court where depute fiscal Paula Russell told how the woman had been with her boyfriend when the shocking find had been made in September last year.

Aitchison has been charged with concealing the device and filming someone doing private act.

Depute Russell said: ‘He noticed a toilet bag in the cabinet facing the shower and noticed three small holes in the bag. The lense was facing through one of the holes.

‘Nothing was said to the accused at the time and the next day the camera was gone. They searched the property and found it in a bedroom.’

The court was told some of the recordings captured Aitchison positioning the device before leaving it to film his victim.

The court heard Aitchison told the woman’s boyfriend his actions were not an ‘addiction’ and pleaded to be allowed to explain. 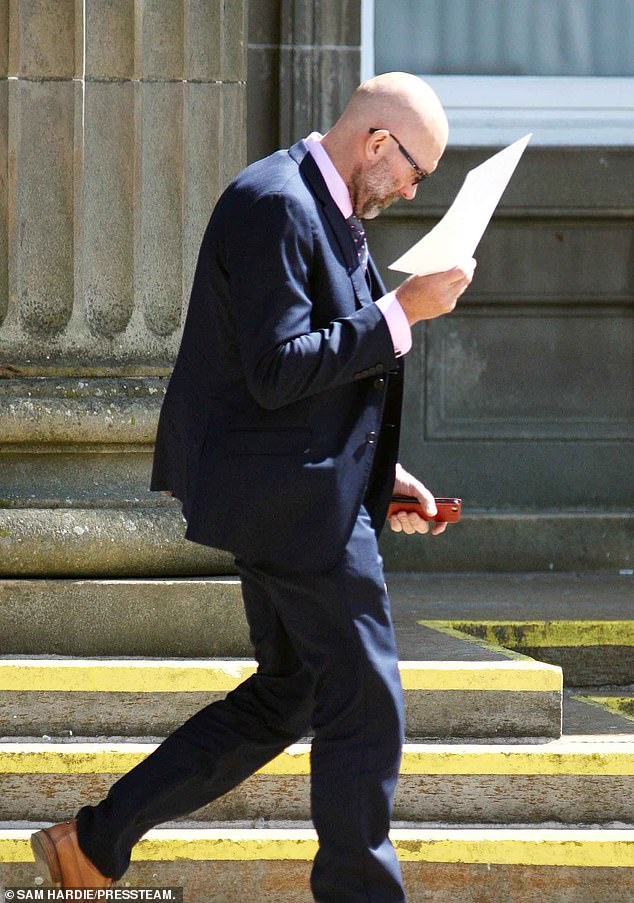 The court heard Aitchison (pictured) told the woman’s boyfriend his actions were not an ‘addiction’ and pleaded to be allowed to explain. He has since been placed on the sex offenders’ register

Miss Russell said: ‘Mr Aitchison said, ‘This has been going on for a wee while and this is why I wanted to talk you you’.

‘He took exception to this and said ‘you have been recording her in the f***ing’ shower’.’

Jackson Bateman, defending, said Aitchison suffered an injury in 2008 and had been suffering from post traumatic stress disorder.

He said he had apologised for his actions.

He also placed him on the sex offenders’ register.

Sheriff Brown added: ‘This is a serious offence and you can expect a custodial sentence.’

Aitchison, a former watch commander with Strathclyde Fire and Rescue, was suspended from his post in 2011 after admitted a charge of behaving in a threatening and abusive manner towards a former partner.

He was later admonished but left the service soon after.