Early in the morning days before the election, I drove by two voting sites before they opened in Birmingham, Alabama. We were in the midst of a torrential downpour and I didn’t expect to see anyone there. When I pulled up, I witnessed over 1,000 people waiting patiently in the rain to vote at one site, and at least 200 at the other.

Those people standing in the rain along with hundreds of thousands of other Black voters contributed to record state turnout and slightly narrowed Trump’s lead in Alabama in 2020.

The power of Black organizing was front and center this election. Once again, we have Black people to thank for bending the arc toward justice. We turned up at the polls in record numbers to cast our vote in defense of Black lives.

We voted in the midst of so much pain and heartbreak. We endured our people being murdered by the police, our children deprived of quality education and healthcare and policymakers conspiring against our basic rights.

Through it all, we cultivated our resolve and worked toward our vision for Black lives. Where I’m from in Birmingham, we mobilized our community and chipped away at the foundation of white supremacy. In its place, we are putting forth a Black radical imagination that holds the key to our liberation and dignity.

Leading up to the election – with support from the Movement for Black Lives and its Freedom Fall fellowship – we texted more than 400,000 Black voters in Alabama. Throughout October, our organization Faith & Works joined with community partners on voter registration events and turned out tens of thousands of Black Alabamians to vote early.

We mobilized to challenge racist symbols and institutions. Freedom Fall organizer Unique Dunston of Say Their Names Alabama led a sit-in in Marshall County to take down a Confederate Battle Flag and relocate a Confederate monument. Activists submitted over 3,200 signatures and more than 100 letters to local elected officials to take down these monuments to racism.

Our organizers educated voters on Amendment 4, a successful ballot measure that will remove century-old racist language from Alabama’s Constitution. Despite the passage of federal civil rights legislation in the 1960s guaranteeing equal protection under the law for Black and other communities of color, our state’s Constitution had yet to reflect these protections, particularly in the areas of voting, marriage and education.

Black community leaders in southern states like Alabama work amid extraordinarily tough conditions, facing voter suppression, police violence and poverty, while knowing many of our neighbors do not stand with us. We choose to show up even though our state has voted Republican in every presidential election since 1980. 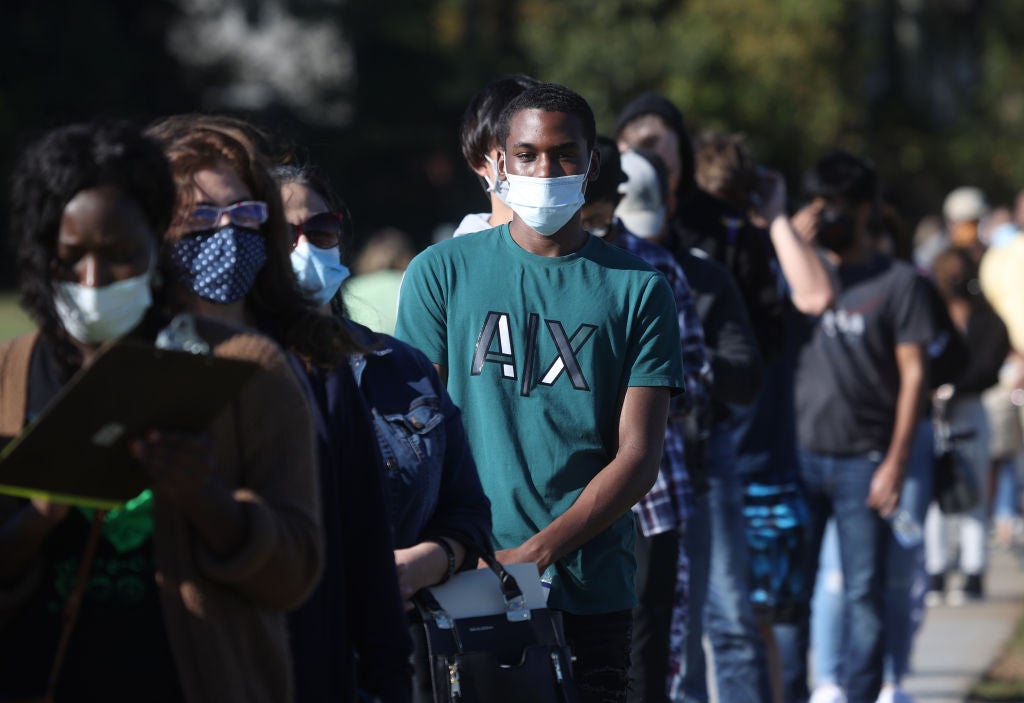 The overwhelming response we received this election season makes it clear Black people are not only committed to exercising their vote but are committed to transforming our communities for the long-haul. We know the fight for justice will not end at the ballot box. Now, we are ready to fulfill the promise of this election: Millions of Black people – with Black women taking the lead – voted in defense of Black lives all over the U.S. to push back against the racial terror and white supremacy enacted by Trump and his supporters.

Black community leaders in southern states like Alabama work amid extraordinarily tough conditions, facing voter suppression, police violence and poverty, while knowing many of our neighbors do not stand with us.

We defeated Trump and it is time for our demands to be met and our vision to be supported by communities across Alabama and the country.

Looking ahead, we will focus on our vision for Black lives that includes defunding the police. We will demonstrate the value of investing in our communities alongside the need to divest in ineffective, racist policing that has harmed Black people for generations.

We will heed the Movement for Black Lives call to urge our Members of Congress to pass the BREATHE Act, historic civil rights legislation that will advance the divest to invest framework at both the federal and local levels to reimagine public safety for all of us.

Our victories this election proved what we’ve long known: sustained organizing makes a difference—it’s what wins elections, up and down the ballot. We’ve seen this across the South from Alabama to Georgia to North Carolina.

Black people organize because only we will set the conditions for our liberation. We organize because we cannot stop fighting for justice until we see all Black people living free in safe, healthy and just communities where everyone has a good job, quality education and affordable healthcare and housing.

This election season we demonstrated what people coming together to assert our demands can do: build Black political power.

We organize because our freedom is not negotiable.

Cara McClure is Executive Director of Faith & Works, a Freedom Fall partner organization in Alabama. Freedom Fall is a power building fellowship run by the Movement for Black Lives, a national network of organizations and individuals creating a broad political home for Black people to learn, organize, & take action. M4BL.org