A lorry driver who says he was left without any energy for three months has decided to leave his ‘freezing’ flat and live in his van instead.

Darryl Moore, 32, handed in his notice for his flat of five years in Upton, Dorset, on Monday after claiming a gas supplier had left him in the cold due to payment errors.

The lorry driver is on the road five days of the week and has decided to live out of a van that he has been renovating for the past year rather than stay in his cold flat.

The father-of-one claims that Ovo Energy’s repeated failure to repair his energy billing system had left him unable to see his eight-month-old daughter who can’t spend time in his freezing flat.

He says the issue was caused by a fault in his pay-as-you-go meter that was fitted in 2020 when his energy supplier Spark Energy was purchased by Ovo Energy.

The meter’s errors date as far back as December 2020 when it left him without any heating, hot water or gas for his hob for more than two weeks. 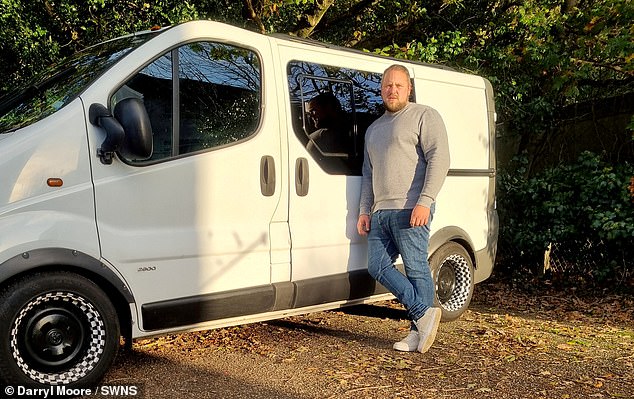 Darryl Moore, 32, handed in his notice for his flat of five years after claiming a gas supplier left him in the cold due to payment errors 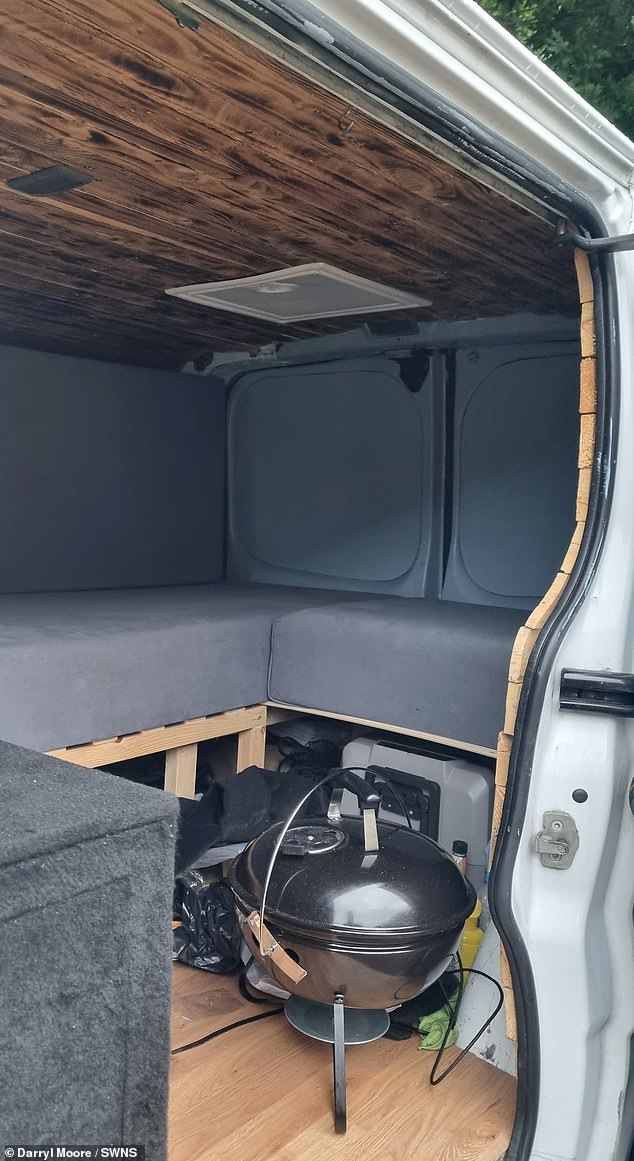 He said: ‘At least my van has a diesel heater I can use to stay warm. I’ve been doing a camper conversion on the van for all of this year, and when it got to the point where I had no gas, I realised the van was warmer than my flat’ 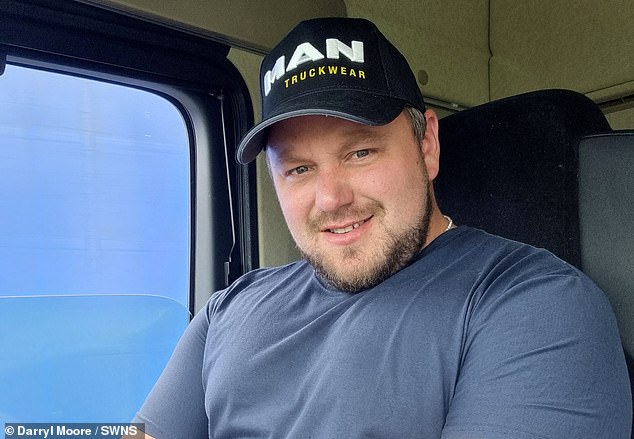 After a complaint to the company and the energy ombudsman, the issue was thankfully resolved – but this time round he says he wasn’t so lucky.

He says after paying to top up his gas in August, the billing system failed to sync up with his smart meter, leaving him without any gas again on August 23.

Darryl said: ‘I topped up my meter, it took the money out of my account, but the top up didn’t go through to my smart meter – so my account then said I had no credit.

‘It started to build up debt, and then it cut off my gas. Last time I put a post on Facebook and it got shared so much that someone from Ovo contacted me and fixed the issue.

‘That time I was lucky too as I took it to the ombudsman and I got compensated for the cost of the energy. After that the meter worked fine until August.

‘On the 23rd I topped up my gas again and the top up didn’t go through. I didn’t know about that so I then went to work for the week. When I came back, I noticed I was in debt again.

‘The debt was only £10, but I was annoyed that it had not worked again so I decided not to pay because it’s a smart meter – it should be reading my top ups.

‘I contacted the complaints system at SSE to ask where my top up was, and they said that my top up had gone through – even though my smart meter was saying it hadn’t.

‘After that, I didn’t hear anything from them. I later checked and the last top up hadn’t been since July.’

Despite complaining to Ovo twice, and then later the energy ombudsman, Darryl was told that an engineer would take up to three months to fix the issue. 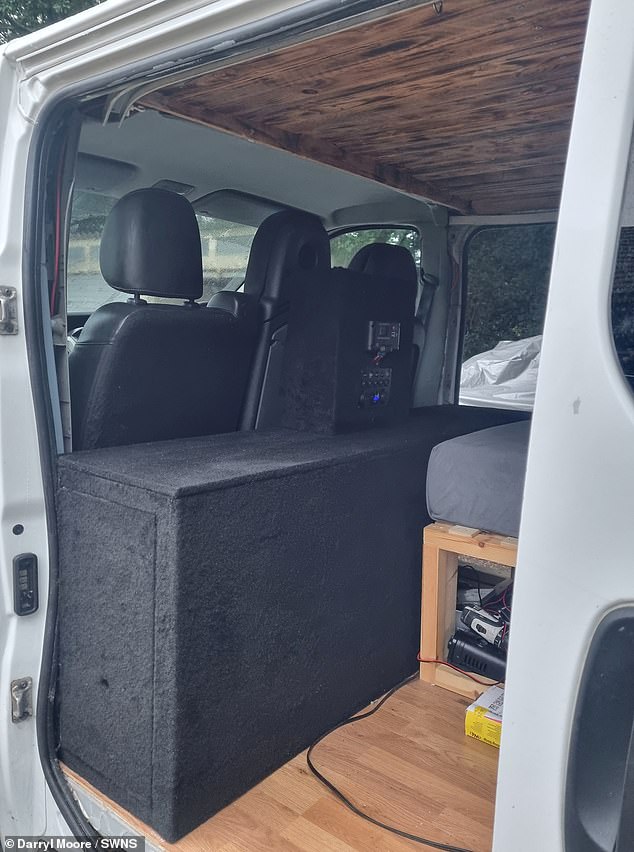 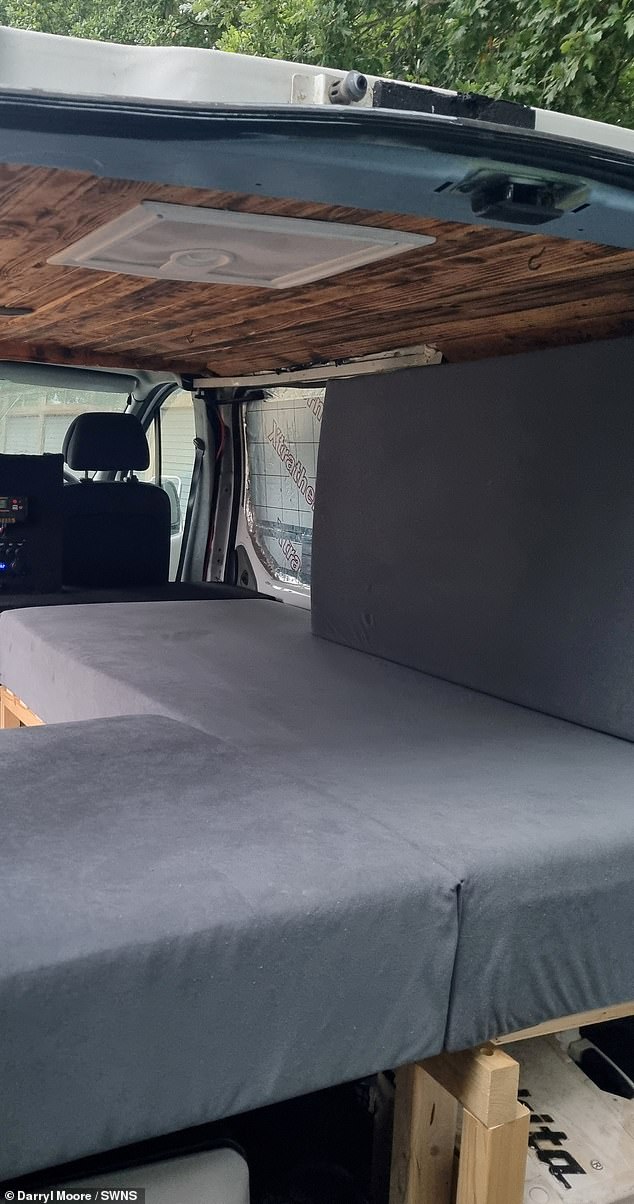 Darryl has been converting his van for the past year, and he says he prefers staying there instead of staying in a flat he can’t heat

After he received no response from the energy ombudsman, he later complained again and was told that the wait would be even longer as there were no available engineer slots for him to take.

Faced with freezing in December, he has now opted to live in a converted van he intends to stay in for the next year.

He said: ‘At least my van has a diesel heater I can use to stay warm. I’ve been doing a camper conversion on the van for all of this year and when it got to the point where I had no gas, I realised the van was warmer than my flat.

‘I decided I might as well stay in my van. The only downside is I have to get rid of all my furniture, some of which I’m still paying for and will have to sell for a big loss.

‘I’d rather do that though than pay for storage or stay in a flat that I can’t heat. I’d rather live on a campsite in my van – but it’s pretty shocking I’m basically making myself homeless.’

Thankfully, for now, the supply has been restored to the flat after the incident was reported by the local press.

Darryl was given a £50 top-up code for his meter that put the heating back on – but says that no engineer has visited to look at the issue meaning it is only a temporary fix.

Ovo Energy said: ‘We’re very sorry to Mr Moore for the shortfalls in service. We can confirm his meter is now working following a visit from an engineer and he’s back on supply.’

One woman told The Guardian that she was informed that she owed £44,800 for two months’ supply of energy for her one-bedroom flat.

Ovo admitted that meter reading errors have impacted certain customers, claiming problems with some accounts that were transferred to Ovo after it bought SSE’s retail division in 2020 were the issue.

Taking to Twitter, the customer, Andy Liggins, wrote: ‘I knew rates were going up but…’ and shared a photo of his meter.

Victoria DeLuis said on Twitter that she was being charged £28,500.47 per hour for gas since installing her smart meter.

Speaking on the social media platform, she wrote: ‘So, today I relented and finally had a SMART meter installed. I am using £28,500.47 per HOUR in gas!

‘I don’t even have the heating on. Called @OVOEnergy and I have to call back Tuesday and hopefully they will be able to sort it out!!!’

When did the takeover happen?