Many Florida airports remain closed Thursday and numerous flights are canceled as Tropical Storm Ian continues to hammer the state. Those that have stayed open are dealing with delays as well as cancellations.

Nearly 2,000 U.S. flights are canceled Thursday, with the highest numbers across Florida, according to Flight Aware, which tracks flight status in real time. Travel through parts of Georgia and the Carolinas are also impacted as the storm moves north.

Travelers are urged to check their flight status before any flight and rebook through their respective airlines. Some airlines have set deadlines for making changes or completing trips, but all travelers whose flights were canceled are eligible for refunds, according to the U.S. Department of Transportation.

Flight delayed or canceled?: New DOT dashboard will show you what you’re owed by your airline. 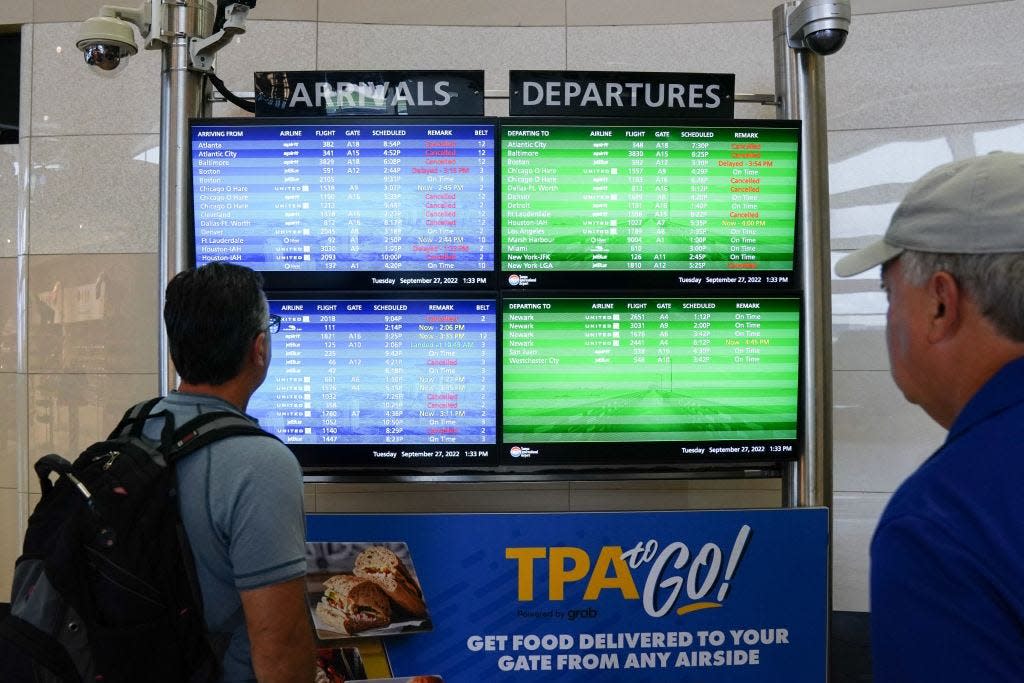 All Thursday flights are canceled and the airport terminal is closed, the airport said via Twitter. Travelers are urged to contact their airlines to rebook. Updates are available through @JAXairport on Twitter and the airport’s website.

The airport shut down Wednesday afternoon and remains closed. “We will reopen as soon as it is safe, and we will continue to communicate with our airlines to get passengers to their destinations as quickly as possible,” Melbourne Orlando said via Twitter. For updates, check Melbourne Orlando International Airport’s Twitter page @FlyMLB or website.

All operations at TPA have been suspended since Tuesday evening. “Damage assessments are underway at our facilities,” the airport said via Twitter Thursday morning. “We are closely coordinating our reopening with the FAA, TSA, airlines, and other partners based on roadway safety, facility readiness, and required staffing. We hope to have an update on reopening plans later today.” Check @FlyTPA on Twitter or the airport’s website for the latest operational updates.

The airport closed Tuesday afternoon due to mandatory evacuation orders from Pinellas County. It will remain closed until the order is lifted. Find updates on St. Pete-Clearwater International Airport’s Twitter page @iflypie and website.

Theme park closures in the storm: Disney World, Universal Orlando and other attractions shut down

The airport ceased operations on Tuesday night and all flight operations are suspended. Updates can be found on the airport’s Twitter page @SRQAirport and website.

The airport closed Tuesday night and remains so. Travelers are urged to rebook flights through their respective airlines. More details can be found on the airport’s Facebook page @flyRSW and website.

The airport is open, but travelers are urged to check with their airlines for cancellations or delays before heading there. Additional updates may be found on Palm Beach International Airport’s Twitter page @flyPBI and website.

The airport is open, but some flights have been canceled or delayed. Travelers should check with their airlines first. More information can be found on Fort Lauderdale-Hollywood International Airport’s Twitter page @FLLFlyer and website.

The airport is open, but a number of flights have been canceled or delayed, so travelers should check flight status with their airline before heading out. For more updates, check Miami International Airport’s Twitter page @iflymia or website.

Allegiant Air expects flights to Florida destinations to be disrupted through Friday. Travelers whose flights are impacted must call 702-505-8888 to change their flight for no additional cost. Customers whose flights were canceled will receive automatic refunds within 72 hours of cancelation notification, according to the airline.

American Airlines will allow passengers whose plans are affected by Hurricane Ian to rebook without change fees or save the flight credit for future travel up to a year from the original ticketed travel dates. Travelers whose flights were canceled are eligible for refunds. Exact rebooking policies vary by airport, so check with the airline to see which rules apply.

American’s policies cover travelers heading to, from and though much of Florida, as well as parts of Georgia and the Carolinas. The airline said it also added reduced, last-minute fares to help people evacuate by air, including waiving checked bag fees for two pieces of luggage and lifting limits and fees for carry-on pets.

Passengers flying to Southwest Airlines’ Florida destinations through Sunday can change their departure/origin to another Florida city without any additional charge, according to the airline’s website. They can also rebook their flight within 14 days of the original date of travel for no extra fee. The airline has also extended that flexibility to passengers traveling to Savannah, Georgia, and Charleston and Myrtle Beach, South Carolina.

Travelers who had planned to travel to United’s Florida destinations through Friday can rebook their flight to occur between now and Oct. 8 and have any fare difference and change fee waived so long as the new flights use the same airports, according to United’s website. A similar policy is also in effect for some of the airline’s destinations in the Carolinas and Georgia. The original tickets for those airports should be for travel on or before Oct. 3, and the new itinerary must occur on or before Oct. 10 to avoid change fees and paying fare differences.