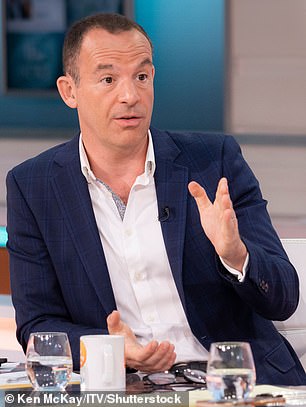 Martin Lewis has welcomed the Government’s energy rescue plan which is due to be announced later today.

The Moneysaving Expert has said that, while it is not perfect, the proposed freeze on energy bills will mean millions of families can ‘breathe a sigh of relief’ this winter.

The 50-year-old said both the plan’s greatest strength and weakness is that it helps everyone, meaning ‘wealthy people like [him]’ will also get their bills cut.

But he said the announcement marked a significant and welcome shift in the Government’s ‘political will’ to help.

He also urged the Government to ensure those who had switched to fixed tariffs should be allowed to exit their contracts without being penalised in light of the new intervention from Liz Truss.

The Prime Minister is today expected to commit the Government to keeping costs for households at £2,500 a year until 2024 – less than half the level many feared they would hit.

Sources have claimed the rescue plan could cost taxpayers as much as £150billion as Ms Truss is expected to liken the intervention to the scale of the Government’s response to Covid.

The freeze is set to last for at least 18 months with the rumoured cost of £150billion more than double that of the furlough scheme.

Speaking to BBC Radio 4’s Today programme Martin Lewis said: ‘By January we expect to see the price cap 120 per cent higher than it is right now – more than doubling – and my great call has always been that we need to have political will to do something.

‘I think we do now have the political will and I very much welcome the plans that are being rumoured to come out today.’ 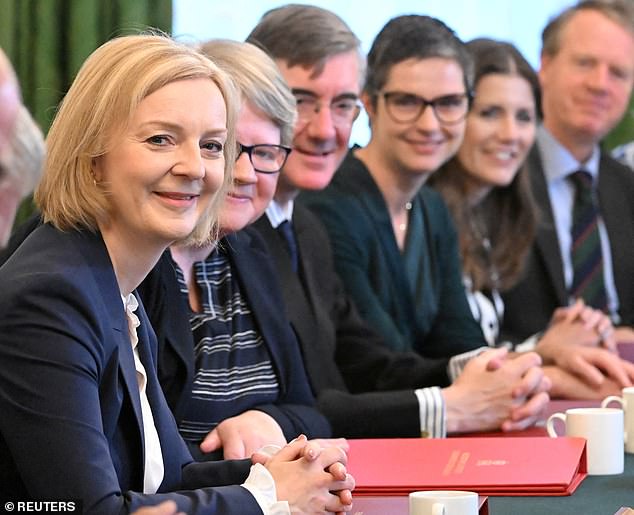 But Mr Lewis said further work had to be done to ensure the most vulnerable in society were getting sufficient help.

He added: ‘We need clarification on whether the remaining payments on benefits, payments for those on disabilities that were announced in May are still going to come through but I think we have to be fair here.

At a glance: What is Liz Truss proposing?

Energy bills will be capped at a typical £2,500 for households for up to two years

There will be a separate package for businesses, although the details are not yet clear

The policy could cost the government £150billion, depending on moves in gas prices, meaning far more borrowing

‘It means wealthy people like me also get our bills cut.

‘But I think we need to welcome that something is being done […] so that people across the country are not going to face hikes of 120 per cent by January, putting a typical bill up to £5,400 which is clearly unaffordable not just for the most vulnerable, not just for those on low incomes but for those on middle incomes too.’

Mr Lewis said the plan needed to be in place for at least 18 months to ensure families are not hit by unaffordable bills next winter as well while energy prices continue to rise.

‘It is of course a very expensive way to do it. It is not a targeted way to give help but as I said at the beginning, my call has been that intervention must come.

‘This is intervention. I’ve been deliberately agnostic about the policy. It would be churlish of me now to come and say this isn’t the right method,’ he added.

The Moneysaving expert also said the Government needed to ensure everyone who needs help gets it including those in Northern Ireland, where there exists a different regulatory structure, and those who pay landlords directly for bills. 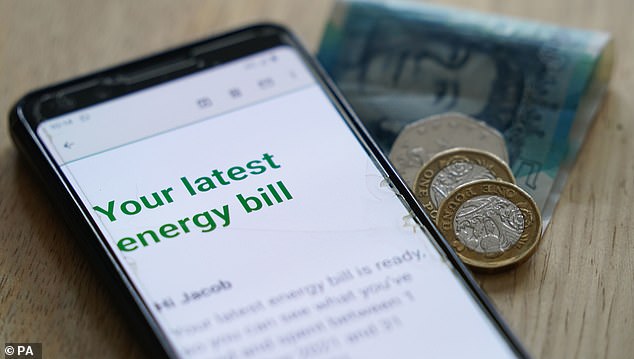 Under Truss’ new plan to tackle rising energy costs, households will pay a fixed rate equating to around £2,500 on an average bill, with the taxpayer bridging the gap with market prices

He urged the Government to allow those who had already chosen to fix their bills in a bid to avoid future rises to be protected by the energy rescue plan.

He told the Today programme: ‘People have made a legitimate choice to fix their bills and what I would be calling for at a bare minimum is that anyone who is on a fix should be allowed by every energy company to switch to the new state subsidised energy tariff and they should be allowed to do that without any exit penalties for doing so.

‘I hope that will be part of the regulations and if I do have a call with the minister later I will certainly be pushing for that.’

In a round of broadcast interviews this morning, Levelling Up Secretary Simon Clarke said UK plc would suffer “enormous damage” if the Government did not intervene.

But he batted away demands from Labour for a new windfall tax on huge profits being made by energy firms, that it claims could raise tens of billions of pounds. ‘The sun rises in the morning and Labour asks for more taxes,’ Mr Clarke swiped.

Speaking ahead of the announcement last night, Ms Truss said: ‘I know families and businesses across the country are worried about how they are going to make ends meet this autumn and winter. 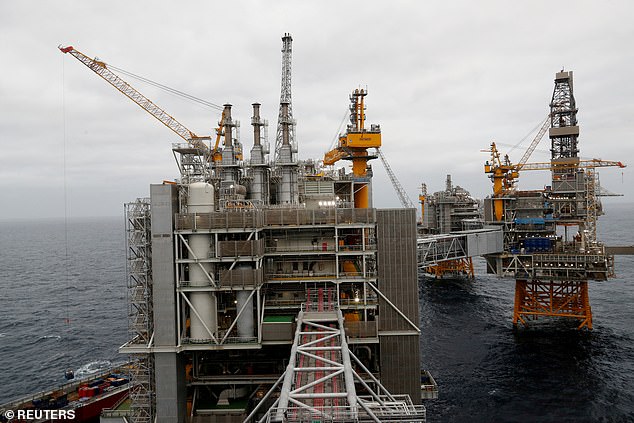 ‘Vladimir Putin’s war in Ukraine and weaponisation of the gas supply in Europe is causing global prices to rise – and this has only made clearer that we must boost our long-term energy security and supply.

‘We will take action immediately to help people and businesses with bills but also take decisive action to tackle the root cause of these problems, so that we are not in this position again.’

The PM confirmed she will ‘open up more supply in the North Sea’, with ministers expected to issue another 130 licences for drilling and exploration.

North Sea production has already jumped by more than a quarter this year as record prices make it viable to drill in fields previously deemed uneconomic.

The Prime Minister also vowed to press ahead with Boris Johnson’s plan to sign off on a new generation of nuclear power stations.

And Whitehall sources said Miss Truss would lift the moratorium on fracking in areas where it has community support – ending a ban imposed in 2019.

‘We need to get going on every source of energy supply,’ one source said. ‘The severity of the challenge means more supply options are on the table and politically palatable.’

Although she had argued against providing universal ‘handouts’ to deal with the fuel crisis, allies say the severity of the surge in bills forced a rethink.

Privately, ministers acknowledge that the final cost of the energy package is ‘unquantifiable’ because it will depend on the level of wholesale gas prices.

The plan will involve the taxpayer effectively subsidising the price of energy. Households will pay a fixed rate equating to around £2,500 on an average bill, with the taxpayer bridging the gap with market prices.

The Centre for Policy Studies estimates that funding the freeze would cost £29billion a year if prices stay at the £3,549 level set by the latest price cap.

But the think-tank said this would increase to £81billion a year if prices rise to the £5,387 they are estimated to hit in January.

The cost could jump to a staggering £116billion if gas prices settle at the £6,616 they are forecast to hit next April.

A separate package for businesses could cost another £40billion, although it is expected to last for just one winter.

Ms Truss has said there will also be help for the 1.5million homes in the UK that rely on heating oil, most of which are in rural areas.

The scale of the rescue package raised concerns yesterday about the scale of Government borrowing, and was partly blamed for a fresh slide in Sterling.

Mr Kwarteng held talks with leading financial institutions as he scrambles to reassure markets that the government will be ‘fiscally responsible’.

He confirmed that he would borrow tens of billions of pounds to help with energy bills and cut taxes. But he said ministers were committed to ensuring the economy grows faster than the UK’s debts.

‘The Prime Minister and I are committed to taking decisive action to help the British people now, while pursuing an unashamedly pro-growth agenda,’ he said.

‘We need to be decisive and do things differently. That means relentlessly focusing on how we unlock business investment and grow the size of the British economy, rather than how we redistribute what’s left.’

What is Truss’s energy rescue plan, how much will it cost, how will it be paid for? Your questions answered

By Jason Groves for the Daily Mail

What is Liz Truss planning?

Britain’s new Prime Minister will announce a freeze on average energy bills of around £2,500. The freeze is more than £1,000 below the latest energy cap of £3,549, which is due to come into effect in October. Households will also still get a £400 rebate, a policy announced in the summer. Chancellor Kwasi Kwarteng has said the support package is likely to be needed ‘this winter and the next’, suggesting it will last at least 18 months.

How will it work?

Ministers will sign legal contracts with the energy suppliers requiring the firms to supply domestic customers with fuel at a fixed price. The taxpayer will then make up the difference between the fixed price and the market level.

Will businesses get support?

Yes. The PM yesterday committed to helping businesses facing soaring bills, saying firms will get help with the ‘immediate price crisis’ this winter. Ministers have been examining proposals to fix the unit cost of energy sold to businesses. But sources said the situation is ‘complex’ and that the full package may not be finalised until next week.

How much will it cost?

Estimates of the total cost vary wildly and will depend on the wholesale price of energy. A Whitehall source said £100billion would be at the ‘top end’ of expectations, but ministers admit privately it could cost £150billion or even more if gas prices continue to soar.

How will it be paid for?

The huge cost is set to be paid for out of general taxation. Miss Truss yesterday ruled out extending the new windfall tax on energy firms, saying it could hit investment in future supplies.

Will it reduce the risk of blackouts?

No. Experts have warned that the plan could increase the chances of power shortages this winter as consumers will have less incentive to cut consumption. With other European countries also considering price freezes and Russia threatening to further cut supplies, there are growing fears of potential blackouts if still weather conditions mean wind turbines cannot operate.

What is the long-term strategy?

The Prime Minister will also unveil plans to ‘radically’ increase the UK’s domestic energy supplies in a bid to make Britain less reliant on global markets. This will include a dash for gas and oil in the North Sea and a renewed drive to build more nuclear power stations. Miss Truss is also expected to lift the ban on fracking, potentially opening up huge new reserves of gas if communities can be persuaded to accept the controversial technology.

Will fracking be forced on local communities?

Fracking has been controversial and was halted in 2019 because of concerns about earth tremors. But the industry insists it is safe, and a recent technical study for ministers – which has yet to be published – is said to have opened the door to its resumption as long as environmental protections are put in place. Miss Truss and new Business Secretary Jacob Rees-Mogg are open to industry demands to relax tight planning restrictions on the technique. And fracking firms are planning to offer local people discounts of up to 25 per cent off energy bills in communities where shale gas is extracted.