He also slammed the package — dubbed the HEALS act for health, economic assistance, liability and schools — for slashing supplemental unemployment benefits, saying it comes at a time when New Yorkers need them most.

“The plan will not work. It is a nonstarter,” he said.

“Think about the first responders, the health care heroes, think about the teachers, the sanitation workers,”  de Blasio added. “All the people we depend on who right now don’t know if they’re going to have their jobs in the future.”

De Blasio has previously said without a federal bailout, 22,000 city workers could be laid off to help plug the budget deficit caused by the coronavirus pandemic.

On Tuesday, he said layoffs “affecting every single agency” could begin as early as Oct. 1. 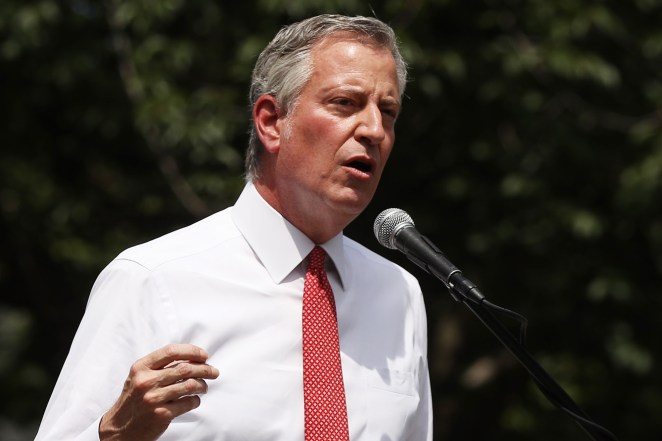 “We need this stimulus very quickly next few weeks to avert that,” he said. “If we don’t get help, we are out of options. We would have to move forward with those layoffs.”

Senate Majority Leader Mitch McConnell unveiled the HEALS act on Monday, which would provide another round of $1,200 stimulus checks to Americans, while calling for a reduction in the weekly unemployment supplement from $600 to $200, unless states submit a plan showing how they would cap benefits at 70 percent of pre-pandemic pay.