Paris: The prayer meeting at an evangelical church in Mulhouse, a small city in eastern France near the border with Germany and Switzerland, was just the latest in a series of such annual gatherings going back a generation.

But this year's meeting – in the words of a regional health official – was "a kind of atomic bomb that went off in the town in late February that we didn't see".

Someone in the crowd of 2500 had the novel coronavirus, kicking off what soon became one of Europe's largest regional clusters of infections, which then quickly spread across the country and eventually overseas. 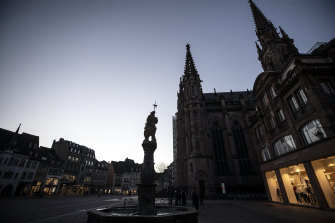 The centre of Mulhouse, a city in eastern France, believed to be the country’s first cluster of COVID-19.Credit:AP

As of Wednesday, local time, France reported 56,989 confirmed cases of the novel coronavirus, and the country's death toll is the fourth highest in the world at 4032, including 509 within the last day And the actual number of fatalities may be higher, because public health authorities were initially not including deaths that occurred outside hospitals in the tally.

As the government desperately tries to contain further spread of the virus with an extended nationwide lockdown and expanded testing, many are asking how France – a country with one of the most vaunted and well-funded public health systems in the world – got to this point.

For weeks, the coronavirus pandemic has shaken the French health system, although the system so far remains largely intact. Certain patients in critical condition are being transferred via medically equipped high-speed TGV trains from areas with overburdened ICU units to lesser-affected regions with greater capacity and military field hospitals. On Wednesday, for instance, the first medical transfers from the Paris region left for Brittany in western France, carrying 36 patients. 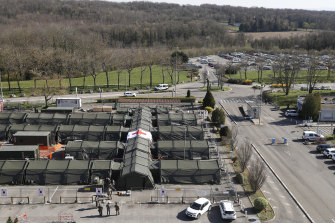 But as public health officials scramble to accommodate rising numbers of patients, details have been emerging about how the Mulhouse prayer meeting had seeded the country's epidemic, sparking community transmission of the virus that went on for weeks before gaining notice. This, at least, is the opinion of France's Health Minister Olivier Veran.

"The tipping point was the evangelical gathering in Mulhouse," Veran told France's Journal du Dimanche newspaper. "The epidemic spread across the country from the gathering."

Since the beginning of the pandemic, churches and other houses of worship have been linked to the transmission of the coronavirus around the world, in places such as South Korea, India and the United States. France appears to be no exception.

When the five-day prayer meeting at the evangelical church – known as Christian Open Door – began on February 17, France only had 12 confirmed cases of COVID-19, with none of those in Alsace, the region where Mulhouse is located. 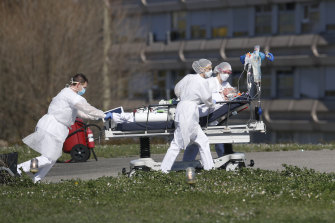 A COVID-19 patient is evacuated from the Mulhouse civil hospital in eastern France last week.Credit:AP

There was at the time little public anxiety over the virus, which was then still largely seen as a Chinese problem. Even in Italy, the first signs of the outbreak that would soon devastate much of the Lombardy and Veneto regions had yet to be detected. So local authorities in Alsace didn't pay much attention to the fact that hundreds of people developed mild, flu-like symptoms in the days after the prayer meeting.

The first confirmed case in Alsace wasn't diagnosed until February 29, according to Christophe Lannelongue, head of the Regional Health Agency in the Grand Est administrative region. The patient was a woman whose children had been at the church with their grandparents, though she did not attend it herself.

Lannelongue's office did not realise what had happened – or the scale of the potential outbreak – until two days later, he told Radio France, which traced the connections from the Mulhouse church across the country.

On March 2, a man tested positive in Nimes, a city 625 kilometres south of Mulhouse, not far from the Mediterranean coast. When local authorities asked about his movements, he revealed that he had attended the prayer meeting in Mulhouse days before.

That realisation, Lannelongue said, was his "eureka" moment. "It was the gathering at the Christian Open Door in Mulhouse!" he told Radio France.

By the time authorities had a clearer picture of the extent of the transmission, containment was no longer possible. The Christian Open Door became a case study in how quickly the coronavirus can spread in an interconnected world.

Church representatives say they resent being blamed for the outbreak, given that the government had not yet recommended any health protocols at the time of the prayer meeting. "Contrary to what certain political leaders have said, we didn't ignore basic rules of security, because at the time there were none yet," said Nathalie Schnoebelen, a church spokesperson, in a statement to the French press.

Cases linked to the Mulhouse church were identified in previously untouched regions across France – in Orleans, Dijon, Besançon, Macon and others, and overseas.

A Strasbourg-based nurse who was in the audience was identified as the source of an outbreak among fellow nurses in local hospitals, infecting approximately 250 people, according to Lannelongue.

Three retirees from Corsica flew home after the gathering and contributed to an outbreak on the island. As of the latest count, authorities have confirmed 263 cases in Corsica and 21 deaths.

Mamadou Karambiri, a well-known pastor from Burkina Faso, was also at the Mulhouse gathering. When he and his wife flew home afterwards, they became Burkina Faso's first two confirmed cases. The West African nation has now reported 261 cases and 14 deaths.

With France now under a lockdown, which prohibits all but essential travel outside the home, a repeat of the Mulhouse scenario is unlikely. But on Wednesday, the French government repeated its message about the necessity of staying put in advance of upcoming religious holidays in April – Easter, Passover and Ramadan.

Sibeth Ndiaye, a government spokeswoman, urged the public not to change the place of their confinement during the holidays. "Obviously, when you move across the country, without knowing it, you can be a carrier of the virus and bring it to places that until now have been spared," she said.

Meanwhile, France's 4032 deaths do not include people who died outside a hospital setting. A raft of deaths over the past month in homes for the aged has raised a stir.

On Wednesday, it was revealed that 19 people had died since March 20 in a home named The Riviera in the town of Mougins on the Cote d'Azur.

Jerome Salomon, chief of the health service, said he hoped to provide a count of the number of people who have died of the virus in such institutions on Thursday. In eastern France, 411 out of 620 aged care homes have cases of COVID-19.

Prime Minister Edouard Philippe last week ordered those in special homes confined to their rooms after an earlier ban on family visits.