An ambitious plan to host up to 60,000 racegoers a day at Flemington Racecourse throughout this year’s Melbourne Cup Carnival has been revealed as the state recorded six new cases of coronavirus.

A traffic controller who worked at a Moonee Valley Racecourse testing site while infectious was reported later on Wednesday, and takes Thursday’s official case numbers to seven.

Victoria’s health department said investigations were continuing into how the traffic controller contracted the virus.

The remaining six local cases are all linked to current outbreaks and were in quarantine during their infectious period. There were 42,009 test results processed on Wednesday, and 19,118 vaccine doses delivered.

Victoria Racing Club chief executive Steve Rosich said the VRC was working with the state government to plan the Melbourne Cup Carnival and that they would be able to release more information about how the event would proceed soon.

“The Melbourne Cup Carnival follows the AFL grand final and we hope this huge period of sport will light up our great city and deliver another epic economic stimulus to many of the industries that hurt so much during the pandemic, including the hospitality, event management and retail sectors,” Mr Rosich said.

“The Victoria Racing Club is planning to safely host up to 60,000 patrons across multiple zones at Flemington Racecourse on each day of the 2021 Melbourne Cup carnival, kicking off with Penfolds Victoria Derby Day on Saturday 30th October.”

Police are also appealing for public help to identify three protesters – two men and one woman – at Saturday’s anti-lockdown rally who may have been involved in setting off flares during demonstrations.

Detectives allege the flares endangered not only police but people in the area where the pyrotechnic devices were used. 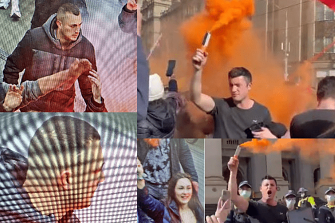 The new community case of coronavirus in Victoria has caused concern amongst public health officials and epidemiologists, who say that even the best-case scenario of the man having caught the virus working at a testing station poses significant challenges.

The traffic controller worked at the Moonee Valley Racecourse drive-through testing site for two days while infectious, before becoming the ninth locally acquired case of coronavirus reported in the state on Wednesday. The other eight cases were all linked to known clusters and were in isolation for their entire infectious period.

Epidemiologists say it will be critical to establish how the man picked up the infection, saying even if he acquired it at work from someone getting a COVID-19 test, there was the danger he could have passed it onto his workmates and others including those visiting the testing station.

The case emerged as organisers of this year’s Royal Melbourne Show announced they would be cancelling the event for the second consecutive year.