Drug users at Melbourne’s safe injecting room mostly live nearby and the trial is achieving its aims by helping the most vulnerable drug users, the Burnet Institute has found.

Debate about the Richmond centre — which opened almost three years ago, agitating some residents who want it moved from its location next to a primary school — has intensified as the government progresses with plans to open a second injecting room in the city. 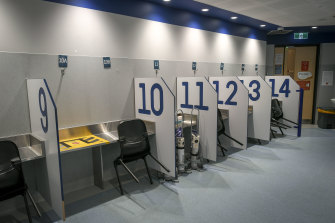 Despite claims it has created a “honeypot” of drug use, a study by Melbourne’s Burnet medical research institute, to be released on Friday and published in the American Journal of Preventative Medicine, has found that many who use the facility live within Richmond or no more than two suburbs away.

The survey showed that 41.7 per cent of people who frequently used the injecting room lived in Richmond or within two suburbs, along with 26.4 per cent of those who used the facility occasionally.

Supervising author Professor Paul Dietze, the institute’s program director of behaviours and health risk, said although 58.3 per cent of frequent users lived more than two suburbs away, they still mostly lived in suburbs that were still relatively close, such as Fitzroy.

“There’s a relatively small number of people who are coming from other places,” Professor Dietze said. “Basically it’s not the case that you get a whole lot of people coming in from Frankston for example.”

Of the people who have never used the injecting room, only 12 per cent lived in Richmond or within two suburbs.

Nearby resident and school parent Kasey Thompson disputed that many of the users were local, saying she regularly sees users arrive in cars and taxis.

“Yes, the area’s had a drug problem for years but it is so much more active now. There are so many people around,” Ms Thompson said.

Richmond’s injecting room opened in 2018 after a spate of heroin-related deaths and increasing heroin use.

The government hopes opening a new site in the city, expected to be in the Yooralla building opposite Flinders Street Station, will take pressure off the existing facility.

Professor Dietze said having just one injecting room in a city as large as Melbourne would provide little coverage because users were unlikely to travel, and even opening a second facility would not help everyone who needs it.

His study found the most vulnerable drug users – those who were homeless, unemployed, or had been to prison – were most likely to use the facility.

“The facility in that way is certainly achieving its aim of trying to assist and preserve the health of those who are most marginalised,” Professor Dietze said.

The study also found those who visited the facility frequently were less likely to inject in public, pointing to a wider community benefit.

An independent review into the first 18 months of the Richmond trial found that it had not improved local amenity or the perception of discarded needles, but had otherwise achieved its goals.

The review estimated the facility saved at least 21 lives in its first 18 months.