Washington: Tens of millions of Americans face financial devastation after losing access to emergency US$600 ($840) per week payments because Democrats and Republicans failed to agree on a new coronavirus relief deal.

The average unemployed worker will lose 61 per cent of their benefit, with laid-off workers in some states losing up to three quarters of their income, after the emergency payments expired at midnight on Friday (Saturday AEST). 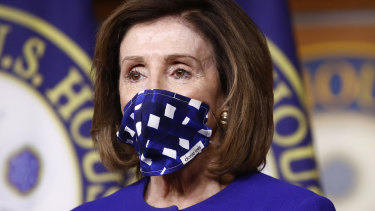 US House Speaker Nancy Pelosi said the extension of emergency coronavirus unemployment payments was a matter of “life and death”.Credit:AP

Both Democrats and Republicans say they want to continue to provide extra relief to the unemployed, but have been unable to reach agreement on how generous the support should be and how long it should extend for.

Economists have praised the emergency payments as the main reason many Americans have not fallen into poverty during the pandemic despite losing their jobs.

Some 32 million Americans – approximately one in five workers – were receiving unemployment benefits at the start of July, according to the US Labor Department. 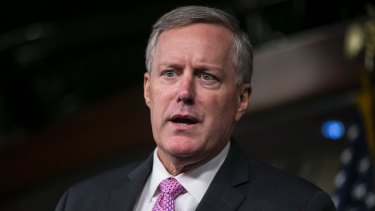 "This represents a major drop in living standards for millions of Americans, forcing people to survive on far less than they had been earning prior to the pandemic and cut spending on necessities — with negative ripple effects throughout the economy," Thea Lee, president of the Economic Policy Institute, a left-leaning policy think tank, wrote this week.

Democrats have been pushing for the US$600 benefits to be extended in full into next year. But Republicans say the payments provide a disincentive for unemployed Americans to return to work and need to be scaled back.

Republicans have proposed paying the unemployed an extra US$200 weekly until states put into place a new plan to replace 70 per cent of lost income for unemployed people.

White House chief-of-staff Mark Meadows criticised Democrats for refusing to agree to an extension of the payments for up to four months, saying: "What we are seeing is politics as usual from Democrats on Capitol Hill.

"The Democrats believe that they have all the cards on their side, and they're willing to play those cards at the expense of those that are hurting." 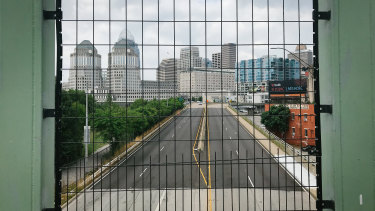 An empty highway is seen from an overpass bridge in Cincinnati, Ohio, where 70 per cent of revenue comes from taxes on wages.Credit:Bloomberg

Democratic House Speaker Nancy Pelosi, in turn, criticised Republicans for failing to reach agreement between themselves and leaving it until the last minute to propose their own plan. Up to 20 conservative hardliners have said they do not want any extension of extra unemployment payments.

"Every time they say something, I say, 'Perhaps you are characterising yourself and think that that's how we are,'" Pelosi said. "We're not. We're here. This is serious. This is life-and-death."

She continued: "We don’t have shared values, that’s just the way it is. So it’s not bickering, it’s standing our ground.

"We put forth what we think is urgently needed by the American people because we recognise the gravity of the situation."

In May Democrats passed a US$3 trillion bill through the House of Representatives that would extend the unemployment benefits through to January.

A University of Chicago study found 68 per cent of unemployed workers who are eligible for benefits receive more in jobless payments than their lost earnings. 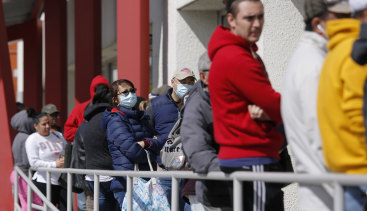 People wait in line to collect their unemployment benefits in Las Vegas.Credit:AP

Real disposable income for individuals has increased since the beginning of the pandemic as a result of the emergency aid package passed in March.

Democratic leaders and White House representatives are scheduled to meet over the weekend in order to try to reach a compromise agreement.

Last week the US recorded its biggest quarterly drop in gross domestic product in history, as the economy contracted by 9.5 per cent compared to the same period a year ago.