There’s not much else to do in Echuca except prepare and wait for the worst. The Murray River topped a water level not seen since 1993 on Saturday, but the flood’s peak is still another day away.

A week after an evacuation order was first issued for Echuca because of flooding from the Campaspe River, the town is still on high alert as the Murray River continues to threaten homes.

The Murray hit 94.8 metres above sea level in Echuca on Saturday afternoon, higher than the 94.77 metres it reached in the floods of 1993. 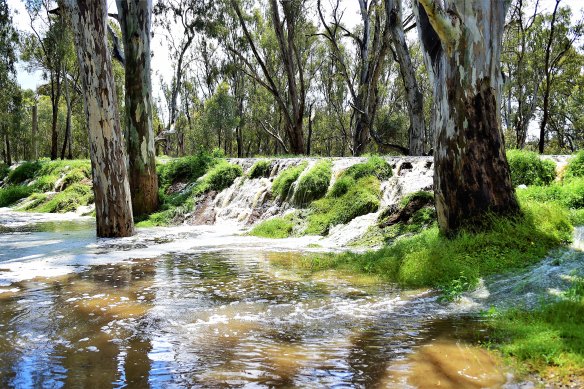 Water flowing from the Murray River over a levee into the Aquatic Centre in central Echuca.Credit:Steve Huntley/Riverine Herald

A peak of at least 95 metres is expected on Sunday evening into Monday morning. The worst flood ever recorded in the town was 96.20 metres in 1870.

The slow but steady rise of the river has given the town plenty of time to prepare. A levee spanning 2½ kilometres of Echuca’s suburban streets is helping protect part of the town, and residents continue to build walls of sandbags around their homes and businesses.

“It allows us to do a bit more planning – we’re ready for the worst-case scenario, it gives us the time to get ready,” said State Emergency Service incident controller Mark Cattell.

On Saturday, the Murray spilt over a separate, older levee near the town’s information centre, creating a waterfall as the Aquatic Reserve used for the town’s Riverboats Music Festival filled up with water. 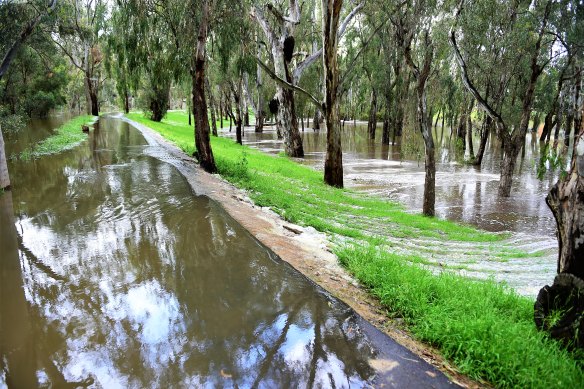 The Murray River has surpassed the flooding in Echuca of 1993.Credit:Steve Huntley/Riverine Herald

“The old levee has had water go over it. The new levee looks like it’s all holding up and that will be monitored 24/7,” Cattell said.

Louise Harris, an employee at the Nirebo Motel, not far from where the levee was breached, said the town was now just waiting for the river to reach its peak.

“It [the river] is definitely getting up there, I think I’ll be OK as my house is about a kilometre away,” she said.

“The town’s doing a great job, I turned up at my house and there were sandbags just sitting on my doorstep.”

Eighteen millimetres of rain were recorded in Echuca on Friday night, and more is on the way in the coming days. Up to 35 millimetres is expected on Monday, according to the Bureau of Meteorology.

“It’s increasing the anxiety for everybody,” said Cattell, who added that the extra rain could swell the river back up to a major flood level. 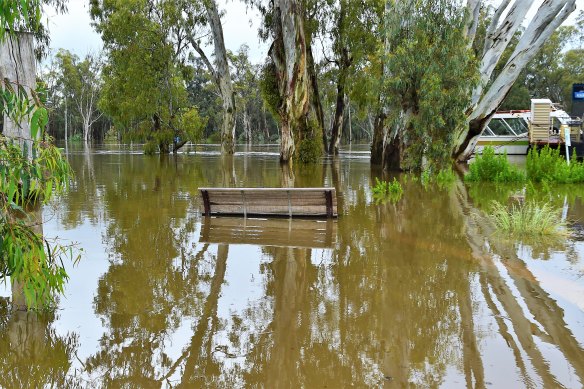 The town of Rochester was on edge again on Saturday night as authorities warned more wet weather in the state’s north could cause the Campaspe River to flood again.

Tim Williams, interim controller for the Rochester SES, said 51 homes and all businesses in the town centre would be flooded above floor level in a worst-case scenario.

“We’re going to get another smack,” he said.

Williams said the Campaspe River would reach a major flood level, even under the most conservative forecast. He said the flooding could begin from Tuesday or Wednesday, but the wet weather could last for eight to 12 weeks.

“If we get a third or fourth smack it’s going to break a lot of people,” he said.

In Kerang, authorities door-knocked parts of the town, telling residents to evacuate immediately, after a section of the town’s flood levee was breached on Saturday morning. 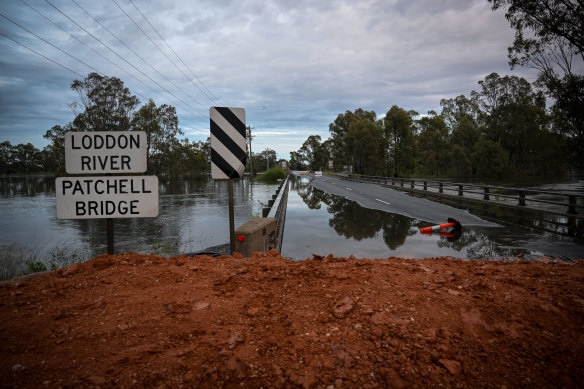 The floodwater level rose to the top of the Patchell Bridge in Kerang on Saturday morning.Credit:Eddie Jim

An emergency warning for the north-west Victorian town, about 250 kilometres from Melbourne, was upgraded to “evacuate now” on Saturday afternoon.

Kerang real estate agent Nathan Hipworth said he was surprised at how quickly the Loddon River rose on Friday night.

“I thought, ‘Well, that’s rising faster than what I thought it would.’”

But Hipworth said locals remained pretty confident that Kerang’s levee of earth and sandbags would hold up.

“Our levee banks have been here for 50 years or so, they are pretty good,” he said. “The township itself inside the levee bank system should be fine, but the houses on the Swan Hill side of Kerang are probably under threat.”

He said locals were more concerned about what would happen over the next couple of months if the rain continued. 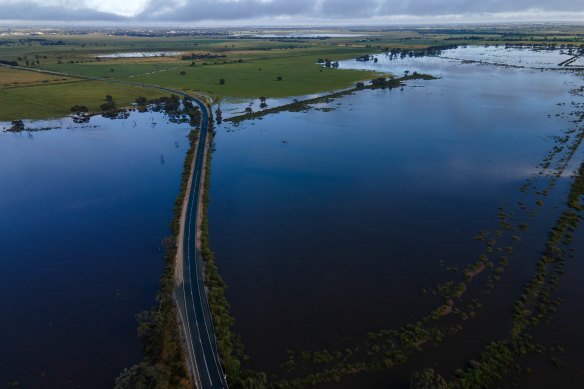 An aerial picview of the Murray Valley Highway, a few kilometres outside Kerang.Credit:Eddie Jim

“Our system is quite a quick-filling system, so it doesn’t take too much rain and now it’s really saturated.”

In 2010, he said, there was a small flood about this time of year, followed by a one-in-100 year flood in January, after a rainy summer.

Hipworth said Kerang was not yet cut off and locals could still get out of town.

“I think some of the information around that has frustrated people because it’s been a little bit inaccurate. You can still get out of Kerang now, but the roads are starting to flood over,” he said on Saturday afternoon.

“It’s going to take a big flood to flood us out,” he said.

Bureau of Meteorology forecaster Michael Efron said wet weather could return to Melbourne and Geelong on Sunday, after fierce thunderstorms delivered flash flooding on Friday night. The SES received about 140 requests for help across the state’s south-west from Geelong to Hamilton.

Within a 500-kilometre radius of Melbourne, 78,938 lightning strikes were detected on Friday, according to Weatherzone. Almost 3.5 million lightning strikes have hit Australia in the last three days as a storm front moved east from central Australia.

The Yarra River near Heidelberg and Abbotsford in Melbourne’s inner north-east is also expected to experience minor flooding.

“Monday is looking like a pretty wet day,” Efron said.