A MYSTERIOUS 23ft seabeast with NO FACE has left experts baffled after it washed up on a beach in Wales.

The bizarre four-tonne creature was found last week on Broad Haven South Beach in Pembrokeshire, Wales, and was reported to the Cetacean Strandings Investigation Programme. 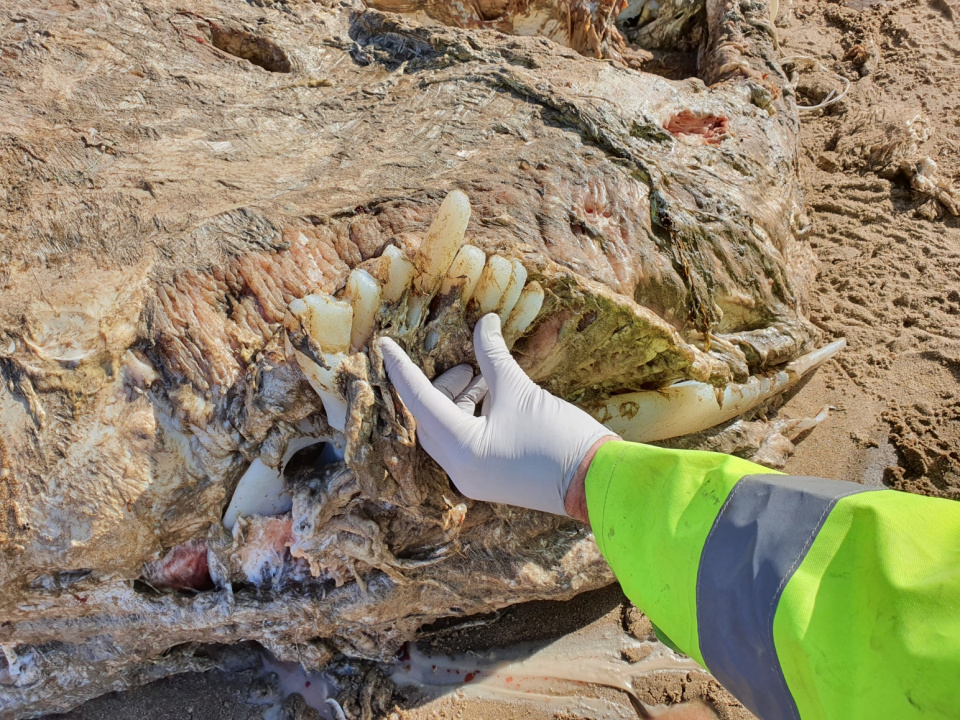 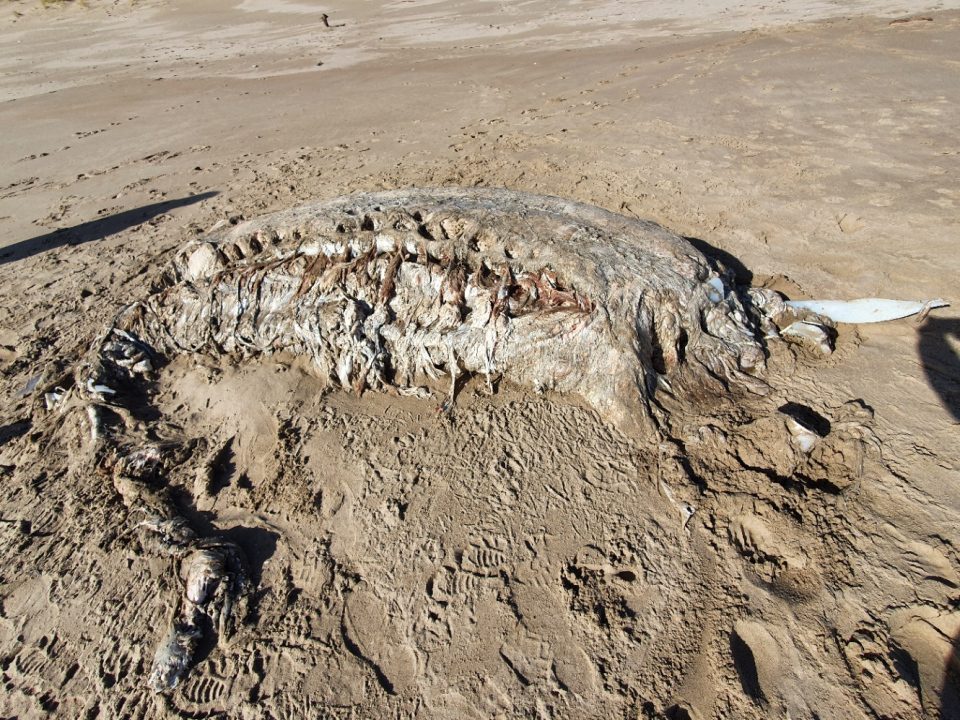 But with the gloopy remains already decomposing, experts couldn't say for sure what the creature was.

Samples from the bizarre seabeast are now being sent for testing.

Matthew Westfield, the CSIP stranding co-ordinator for Wales, said: "It's very difficult to tell for certain what it is because it's so badly decomposed.

"It died at sea and had been dead for a while before it washed up on the beach, so it would have come in with one of the high tides."

In pictures from the scene, the remains include a grey husk, stringy in some places, with bony elements showing through in others.

No obvious feature of the creature's biology stands out, with the head and limbs seemingly non-existent.

And though Mr Westfield identified a spine, measuring some seven metres, even the animal's true scale is uncertain.

He said: "Basically the whole head element was either decomposed or missing or pointing in the wrong direction.

"We were unable to say, 'right, there's the head element of it' so we suspect it could have been longer." 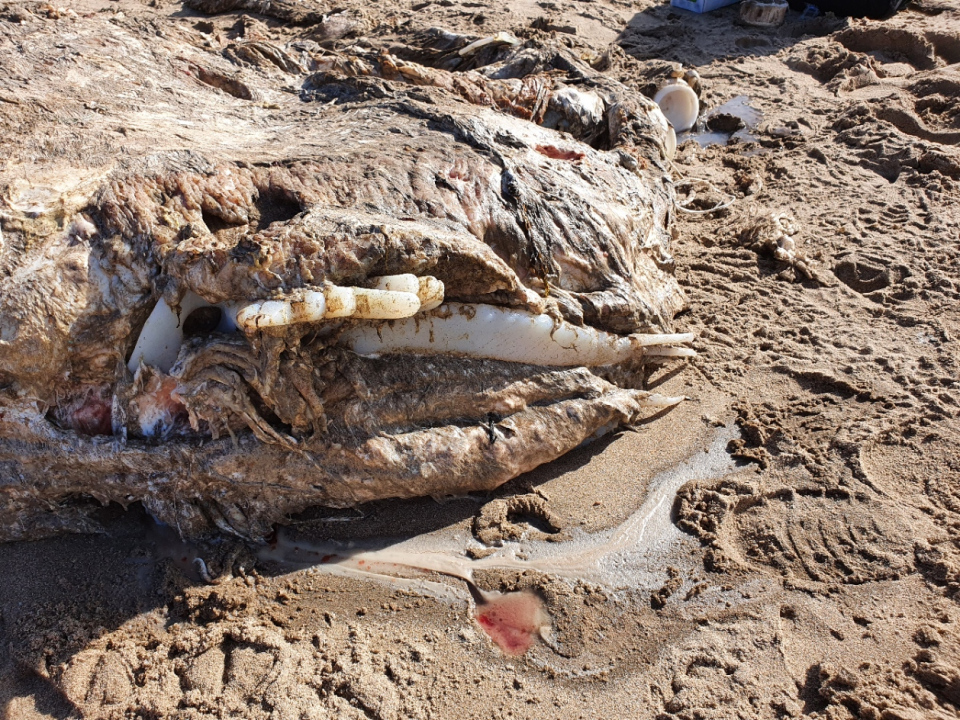 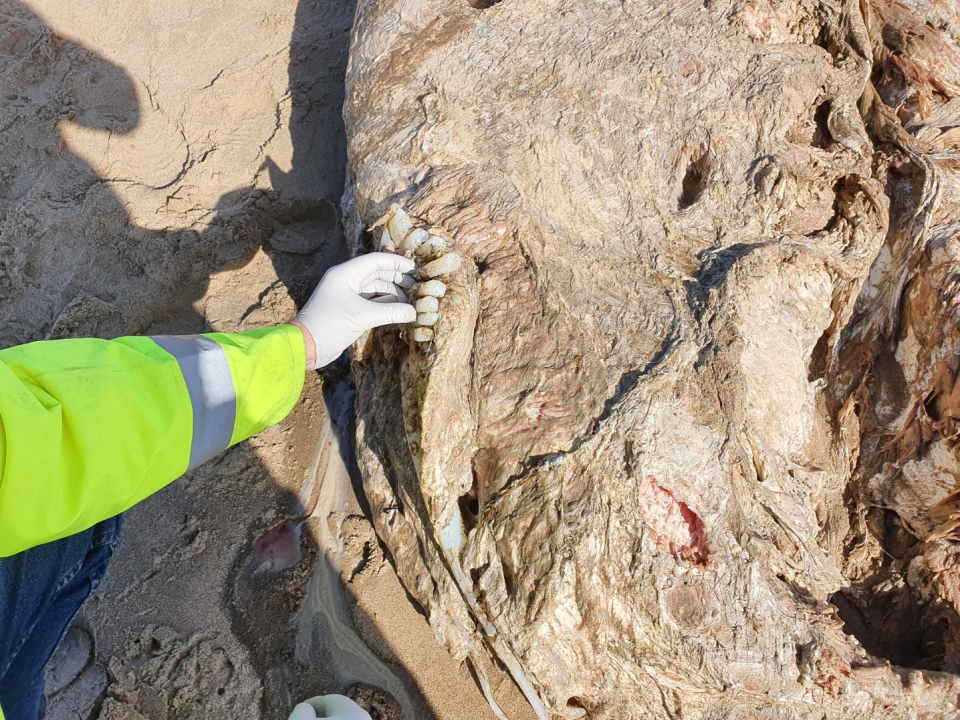 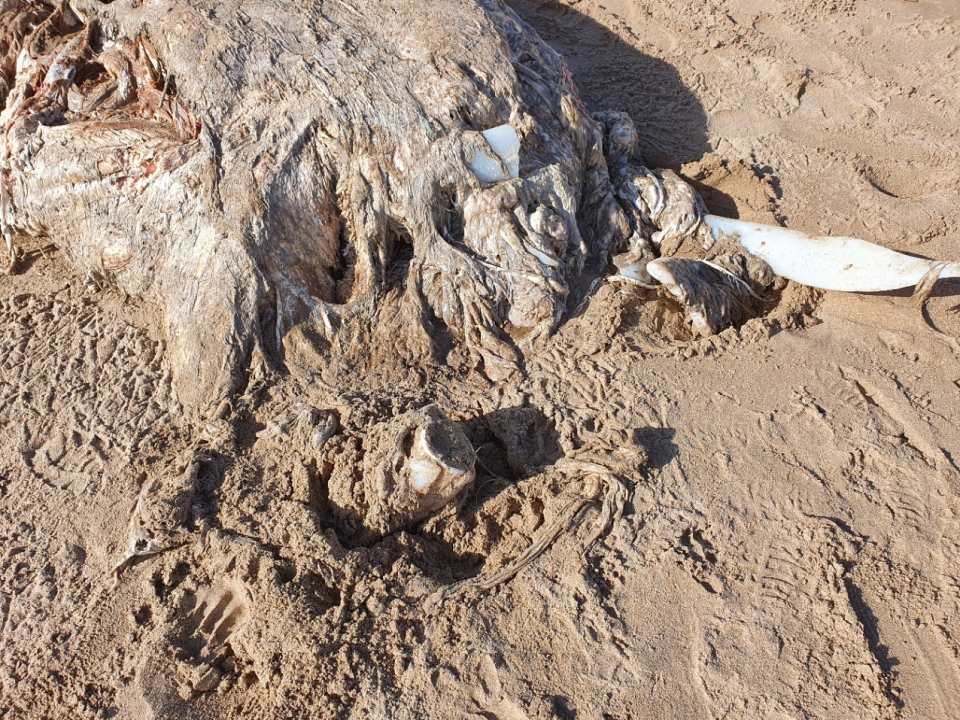 However, inspecting the remains in person did offer some clues.

Matthew said: "Basically I got a report of a blob – a huge thing that washed up on a beach.

"And the lady that actually reported it to us had done a bit of research and had initially come back saying that she thought it might have been a basking shark.

"Well by the pictures we initially didn't think so because of the size of it and because it is rare to get basking sharks wash up on the beaches around Wales.

"So initially we thought it was going to be a whale but when we actually got there and did an exam on it, it became clear that it definitely wasn't.

"The initial clue was the smell of rotten fish. Decomposing fish smell different to decomposing whales.

"Then we got closer and we had a look at the bone structure which indicated that it definitely was not a whale and it was going to be some sort of fish."

Mr Westfield now believes the remains to be of a basking shark, but he still can't be sure.

He said: "We couldn't say 100% because there are other species it could be, even including the whale shark – which is actually a bit bigger but then it could have been a juvenile."

He continued: "We've taken pictures, we've taken a couple of samples, and we've sent them off to the Natural History Museum and some of the specialist teams there, along with London Zoo.

"We just have to wait and see what happens."

Despite the tests, experts believe finding out what killed the strange seabeast will be impossible.

"It's completely impossible to say what the cause of death was," Matthew said.

"It could be anything from its age, to bycatch, to injury to anything else."

The remains must now be either buried where they are, removed from the beach in chunks or left for nature to take its course. 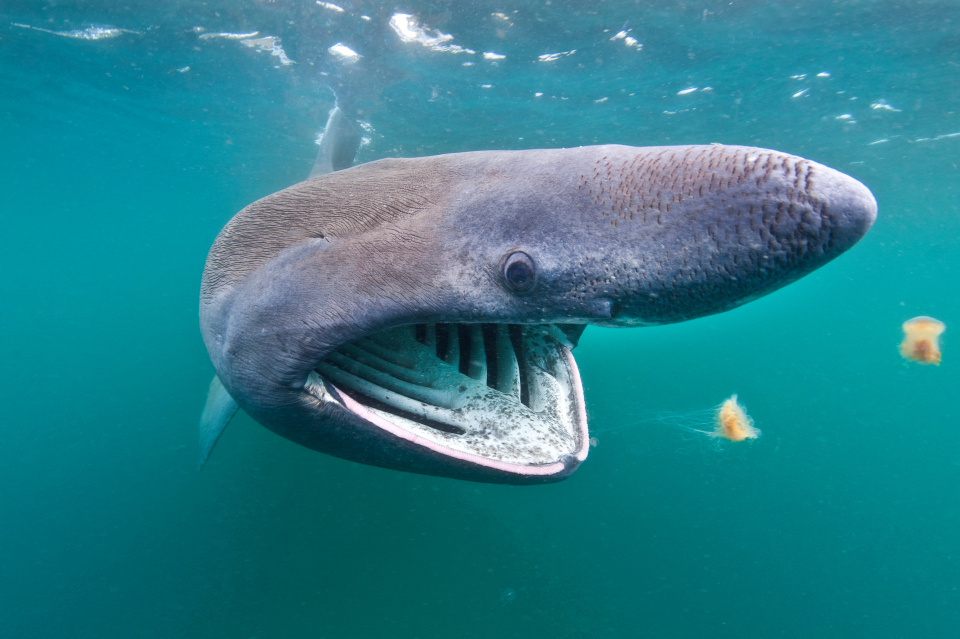