Home » World News » Nurse, 36, who hid line on her fingernail is told it's rare cancer

Nurse, 36, who hid line on her fingernail is told it's rare cancer

Nurse, 36, who hid ’embarrassing line’ on her fingernail with red nail polish for three years is told it’s rare cancer and is ‘lucky’ it hadn’t spread

A nurse who hid an ’embarrassing line’ on her fingernail was told she had a rare type of cancer after stumbling across an article listing it as a symptom.

Alana Severs, 36, a nurse from Portsmouth, Hampshire, ignored the tiny mark on her fingernail for years – covering it in red nail varnish to hide the line.

But Mrs Severs spotted an article on Cosmopolitan magazine’s website in January 2017 – detailing how a line on your nail can be a symptom of an unusual type of cancer.

Panicked Mrs Severs went to her GP the next day and they sent her for an urgent referral.

After a biopsy, Mrs Severs was diagnosed with melanoma and had to have two surgeries to remove the cancer. 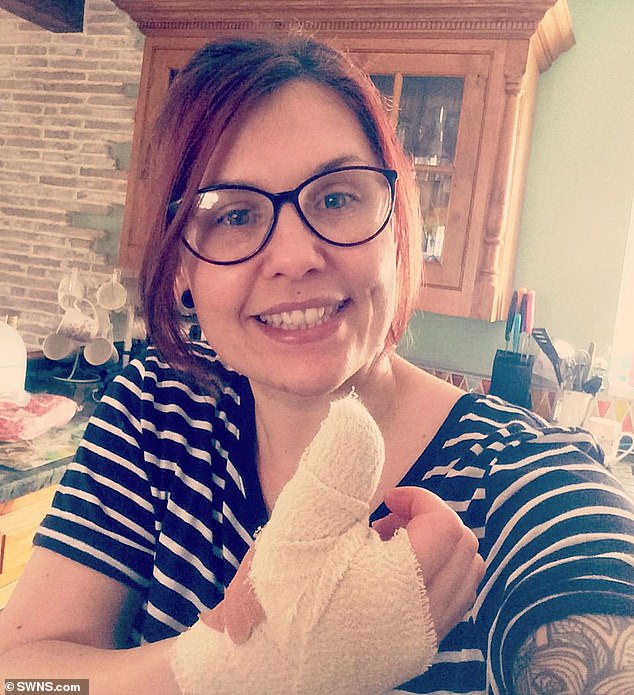 Alana Severs, 36, from Portsmouth, Hampshire, ignored the tiny mark on her fingernail for years – covering it in red nail varnish to hide the ’embarrassing line’.

Now Mrs Severs has been left with no fingernail, but she is grateful that she caught that cancer before it spread.

Mrs Severs said: ‘Because it was just a tiny line I never thought anything of it and I always wore red nail polish to cover it up because I was embarrassed about it.

‘Then reading this article made me panic.

‘But I’m relieved I came across it when I did – it might just have saved my life.’ 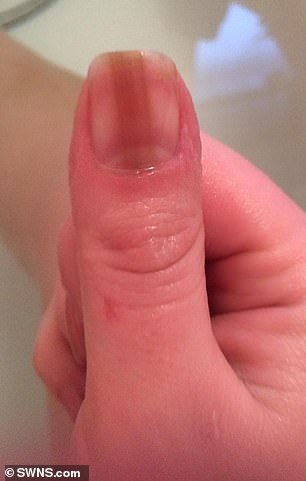 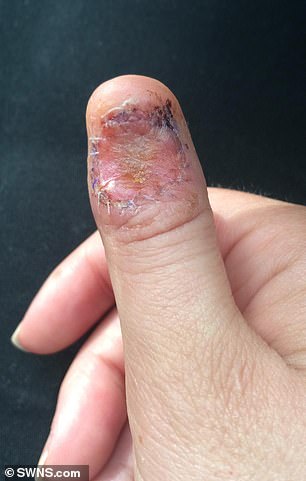 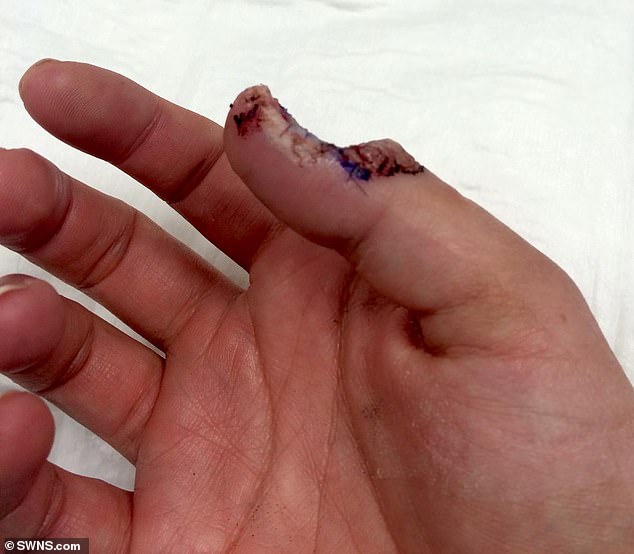 After a biopsy, Mrs Severs was diagnosed with melanoma and had to have two surgeries to remove the cancer

When Mrs Severs first spotted the article on Cosmopolitan magazine’s website she immediately knew that something could be wrong with her nail.

‘I sent screenshots to my partner in an absolute panic and said my nail looks exactly the same.

‘I was terrified that I had cancer and couldn’t believe that I ignored it for so long.

‘I went to the GP the next day and it was an urgent referral.’ 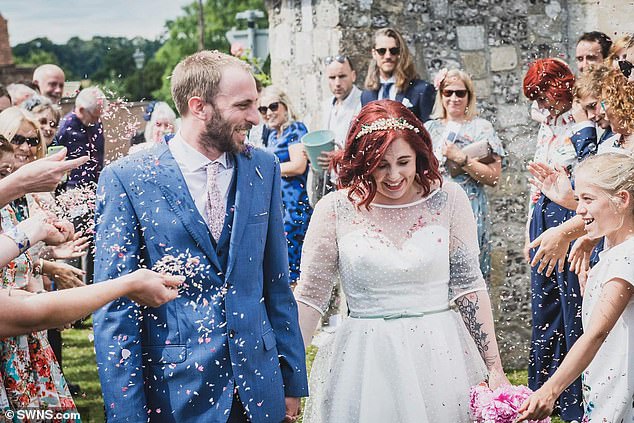 Alana with husband Nathaniel Severs on their wedding day

Medics at Queen Alexandra Hospital, Portsmouth, told Mrs Severs she needed her fingernail removed immediately before it spread into her bloodstream.

She said: ‘By some miracle, although it had been growing outwards and the line was getting bigger, I was so lucky that it hadn’t started growing down yet so I was cured with a few surgeries.

‘It was literally reading an article that made me go to the doctors the next day.

‘They said it was brilliant that it hadn’t grown down into my hand. It had just grown outwards so it hadn’t got to my blood yet.

‘I was so lucky that after three years it hadn’t done that. 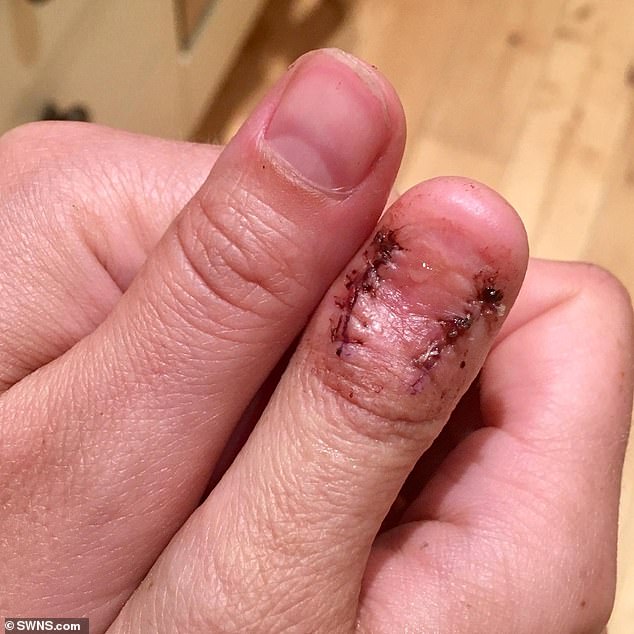 Mrs Severs said: ‘What I thought as a frivolous pastime, reading an article at 11pm, while I was in bed turned out to save my life’ 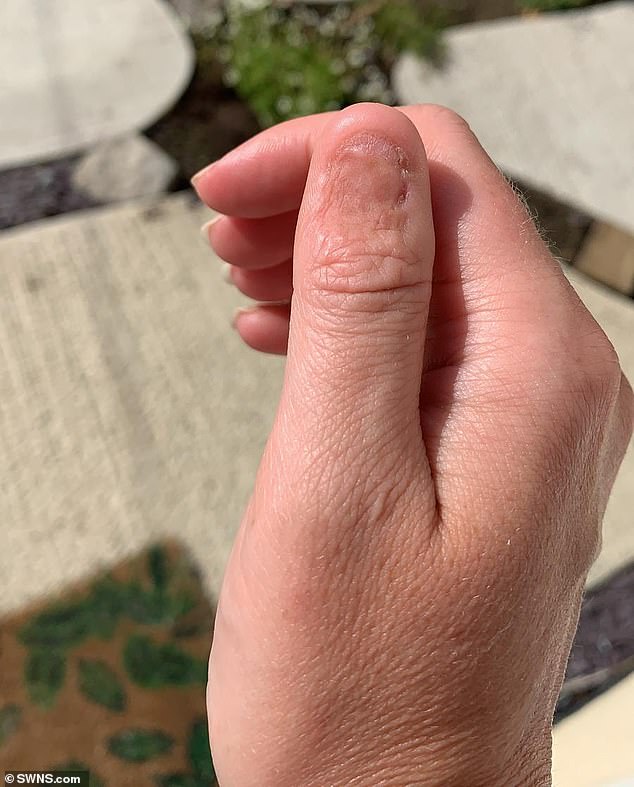 ‘It was one of those incredible things that it hadn’t, it could have gone down at any point.’

Now Mrs Severs has been left without a fingernail, but she is grateful she caught it before it spread.

She said: ‘It really shook me up that I saw it in an article.

‘It was something that I had and I ignored.

‘I’d mentioned it in passing before but it was just rushed off.

‘What I thought as a frivolous pastime, reading an article at 11pm, while I was in bed turned out to save my life.

‘You don’t think that anything like that would change my life.

‘But my life was changed, just by reading an article.

‘I could have gone another three years without thinking anything of it – and it could have spread and become deadly.’

Mrs Severs has a skin graft from her arm covering the space where her fingernail used to be.

She said: ‘After the surgery I felt nauseous and it was painful for quite some time but it did heal.

‘Now it doesn’t bother me at all.

‘I would rather lose my whole arm and get rid of the cancer than risk it spreading.’