Home » World News » One in 11 people have now had Covid in England, official study

One in 11 people have now had Covid in England, official study One in 11 people have now had Covid: At least 8.7% of England’s population has coronavirus antibodies, ONS figures show – and that’s WITHOUT including care homes or under-16s

At least one in 11 people in England have had coronavirus, a Government-run surveillance study suggests.

The Office for National Statistics found 8.7 per cent of adults had Covid-19 antibodies in their blood by November.

Antibodies are virus-fighting proteins made by the immune system in response to a viral infection and stored so the body knows how to defend against future exposure.

If someone has Covid-19 antibodies it means they’ve previously contracted the disease and recovered.

The finding suggests more than 3.9million people in England have been infected with Covid-19, which is more than double the UK Government’s official number of 1.5million.

The ONS’ estimates are based on tens of thousands of blood tests sent randomly to people’s homes every week.

It only includes people over the age of 16 and does not look at care homes and hospitals, meaning it is likely to be a vast underestimate.

Statisticians at the number-crunching body estimate 4.4million adults across the whole of the UK (6.6 per cent) have caught and beaten Covid-19. 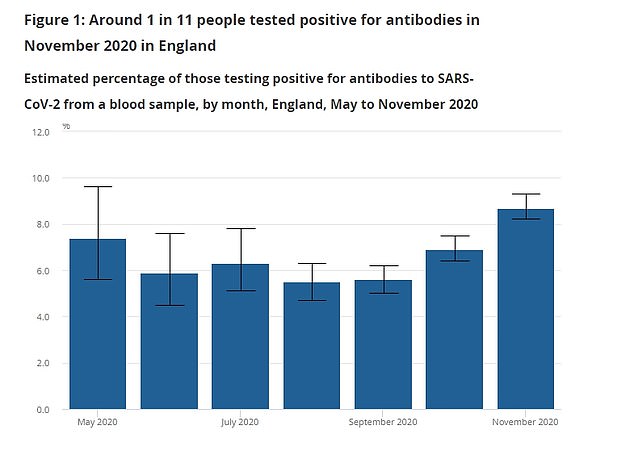 The Office for National Statistics found 8.7 per cent of adults had Covid-19 antibodies in their blood by November 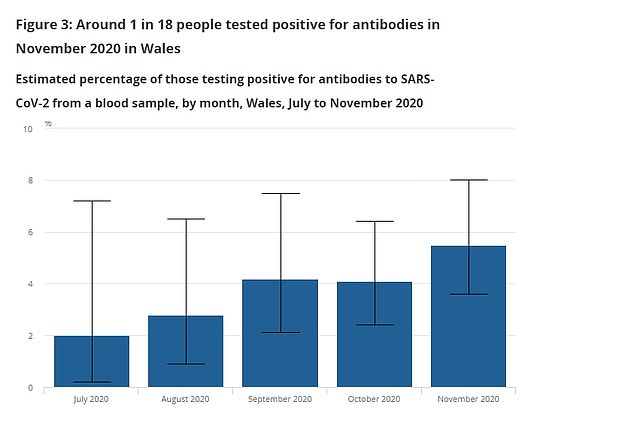 It found 140,000 in Wales (5.5 per cent) had previously been infected with the viral disease 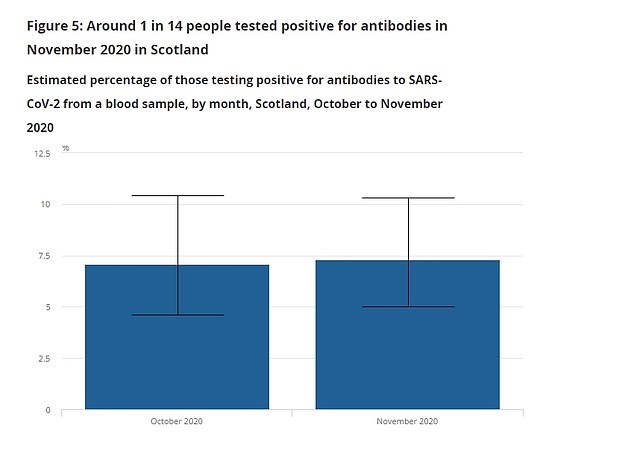 Statisticians at the number-crunching body estimated 326,000 people in Scotland had antibodies (7.3 per cent) 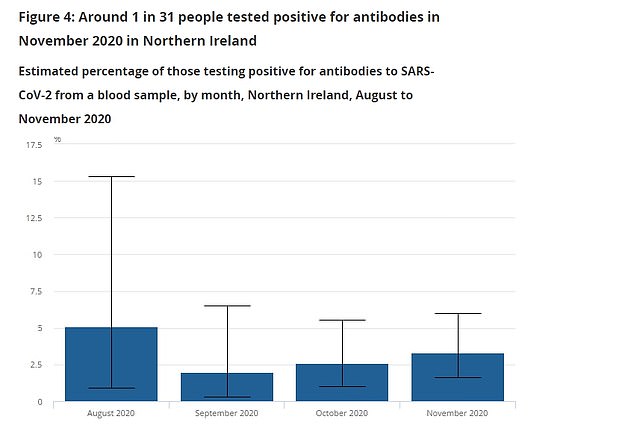 Prevalence was lowest in Northern Ireland, where just 3.3 per cent showed signs of earlier infection

The findings reveal the country never came close to achieving so-called ‘herd immunity’, a policy considered by politicians at the very beginning of the crisis.

Boris Johnson is thought to have thrown his weight behind the controversial strategy in March, which would require letting at least 70 per cent of people get infected on purpose.

Herd immunity happens when so many people in a population become immune to an infectious disease that it prevents it from spreading.

The ONS sends roughly 20,000 antibody kits, which require a finger-prick sample of blood, to random households across the UK, regardless of whether people have symptoms.

Researchers then extrapolate the findings to the nationwide population to paint a clearer picture of how the virus has behaved in the UK.

The 8.7 per cent figure in England is the highest since the ONS study began in May at the height of the first peak of the crisis.

The number of people with antibodies that month was 7.4 per cent, the equivalent of 3.3million, or one in 14.

It’s not clear how long Covid-19 antibodies remain in the blood, or how long immunity against the virus lasts – although scientists suspect it is the best part of a year.

In November, the prevalence of Covid-19 antibodies was highest in London, where 12.8 per cent of people tested positive, the equivalent of 911,000 people.

The capital was the country’s Covid hotspot during the first wave of the virus as imported cases from Europe and Asia arrived at its busy airports and transport hubs.

London is now recording the highest infection rates in the country once again after a lull in transmission earlier in the year and looks poised for a Tier 3 lockdown this week.

The ONS found 11.1 per cent of people in Yorkshire and The Humber had antibodies – disease-fighting proteins made by the immune system in response to infection.

The study suggests the virus kills around 1.6 per cent of people it infects, which is far higher than seasonal flu, which has a death rate of 0.1 per cent.

Experts have estimated that Covid-19 kills between 0.5 per cent to 1 per cent of patients.

Meanwhile, the survey found ethnic minorities were around twice as likely to have Covid antibodies compared to white people in the East Midlands, North West and South East.

This is in line with a wealth of studies which have shown black, Asian and ethnic minority (BAME) Brits catch and die from the disease at a disproportionate rate.