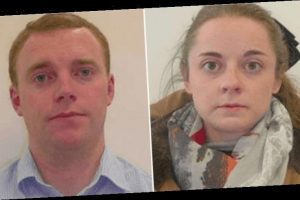 A NSW pair who ran from officers at Melbourne Airport after being told they would need to quarantine for 14 days have been found in regional NSW and will be fined more than $19,000.

Police say the 26-year-old man and 24-year-old woman got off the flight from Canberra just before 11am on Friday. 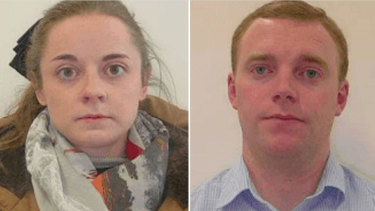 Police say the 26-year-old man and 24-year-old woman got off the flight from Canberra just before 11am on Friday.

Authorised officers spoke to the pair, and told them they would be required to quarantine in Victoria for 14 days, based on the current Chief Health Officer's directions.

"The pair then ran from the officer, fleeing the airport and were picked up by a vehicle outside," a Victoria Police spokeswoman said.

The man and woman, who usually reside in NSW, were initially believed to be in the Sunbury area.

Health Minister Martin Foley said on Saturday the duo had been found in the NSW town of Goulburn, around 90 kilometres north-east of Canberra.

"Those two people absconded from discussions with authorised officers at Melbourne Airport, they came in from Canberra, they did not have the appropriate declaration material and they would have been heading straight into compulsory hotel quarantine," he said.

"They absconded, they disappeared in a vehicle and they were next heard of in Goulburn in New South Wales. We are working with the New South Wales authorities. This is a very serious matter

“Upon the advice of the public health team, those people have breached numerous orders of the public-health state of emergency in Victoria and they will each be fined at least $19,000 for their breaching of those arrangements."

It comes after a 57-year-old woman from Bateau Bay on NSW's Central Coast – which was part of a designated red zone at the time – allegedly drove through a COVID-19 checkpoint in East Gippsland at a fast rate of speed on Wednesday morning.

Police initiated a pursuit of the woman, but it was later terminated "owing to increasing risk to the community, caused by the alleged manner of the woman’s driving", police said.

Police near Nhill in Victoria's west used a tyre-deflation device on the Western Highway to stop the woman's car 14 hours after she allegedly evaded officers at the border.

Police say the woman was arrested without incident and will be assessed and interviewed at a later date for alleged offences, including conduct endangering life, failing to stop on police direction and contravening the Chief Health Officer's directions.

A tourist from Adelaide was fined $13,000 after he escaped hotel quarantine just hours after landing in Perth to go clubbing with a friend in the city.

The 25-year-old fronted Perth Magistrates Court on Tuesday where he pleaded guilty to five counts of failing to comply with a direction under the Emergency Management Act.

Anyone with further information that could assist police with their enquiries is urged to contact Crime Stoppers on 1800 333 000 or submit a confidential report at www.crimestoppersvic.com.au