Boris took car, helicopter, military plane and train for top secret five-hour visit to Kyiv where he dined on goats cheese and chicken soup with Zelensky – and was given a ceramic rooster to symbolise Ukrainian resistance

Boris Johnson travelled by car, helicopter, military plane and train for his top secret visit to Kyiv where he dined on chicken soup with Volodymyr Zelensky.

Downing Street has revealed more details of the dramatic trip, when the PM became the first leader of a G7 nation to go to the Ukraine capital since the Russian invasion.

Mr Zelensky heaped praise on Mr Johnson after his five-hour stop in Kyiv on Saturday, saying the UK’s leadership would ‘go down in history’.

The premiers have struck up a close relationship, speaking nearly daily on the phone since the crisis erupted.

Mr Johnson has been eager to visit Kyiv for weeks, but was thwarted by security concerns until Russian troops were pushed back.

The complexity and risks involved in the journey were underlined as No10 revealed that the PM departed the UK on Friday night, but did not return until Sunday morning. 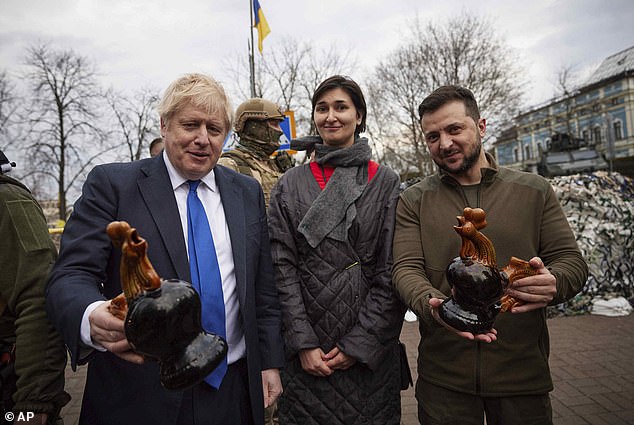 Boris Johnson and Volodymyr Zelensky were handed ceramic cockerels by a woman in Kyiv. They have become a symbol of Ukrainian resistance since one survived bombing in Borodianka 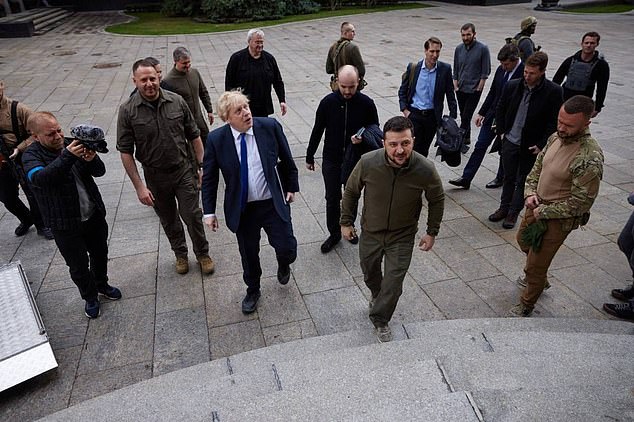 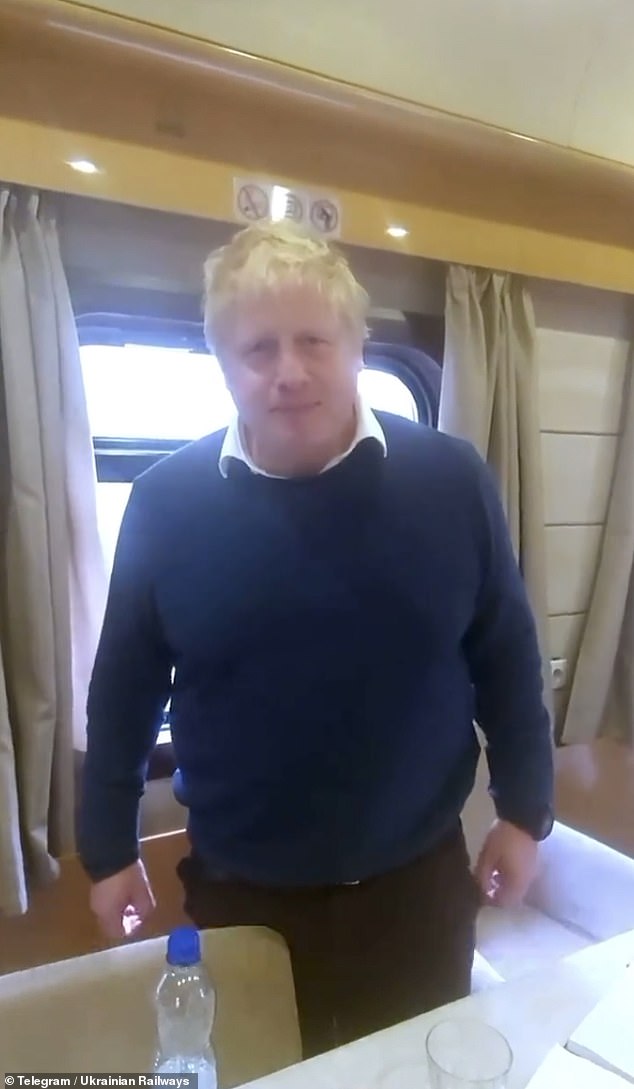 A video emerged showing Mr Johnson on the train from Poland into Ukraine, shedding light on how the high-risk visit was conducted

The spokeswoman said that ‘operational concerns’ meant it was still not possible to go into ‘too much detail’ about the arrangements, but Mr Johnson travelled by car, helicopter, military plane and train to get to Kyiv and back.

He recorded a video on board a Ukrainian train crossing the border from Poland, praising the bravery of staff.

‘On arrival in Kyiv, the PM and President Zelensky met for an hour – this was a meeting just with the two of them. They then went on a 30-minute walk together to Independence Square,’ the spokeswoman said.

‘You’ll have seen some of the footage – he met with Ukrainians and passed the memorials that have been put up to victims of the war.’

After returning, they held a further full bilateral meeting over dinner, she added.

The pair had a starter of goats cheese salad and chicken soup, followed by a main course of roast beef and cherry dumplings for dessert.

Asked who accompanied the Prime Minister on the visit, the spokeswoman said: ‘It was a very small delegation. I believe it was one member of his private office and then security.’

She said Mr Johnson was in Kyiv for ‘around five hours’.

‘In terms of the entirety of the visit, he left on Friday evening and he travelled overnight, and he arrived back in the UK on the Sunday morning,’ she said.

The PM’s presence was intended to be kept secret until he had left the war zone. However, it was mistakenly announced in a mid-afternoon tweet on Saturday by Ukraine’s embassy to the UK, which posted a picture of the leaders chatting with the caption ‘Surprise’ and a winking face emoji. 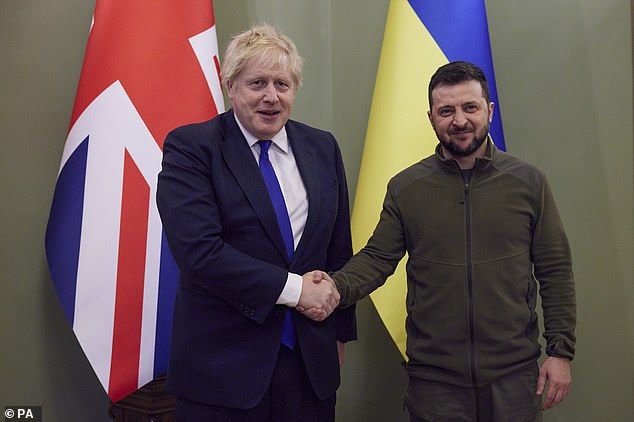 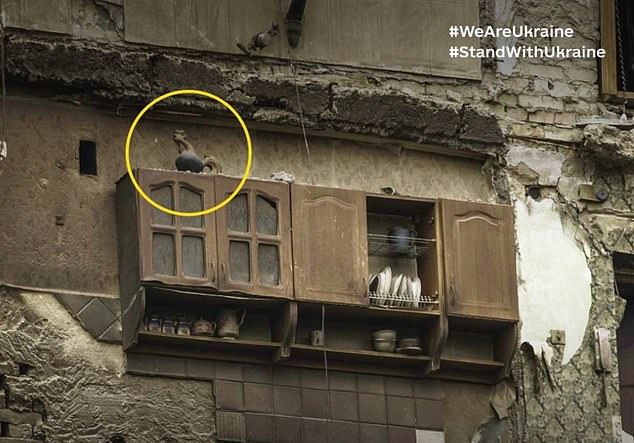 A cockerel designed by 20th Century Ukrainian artist Prokip Bidasiuk famously survived intact on a kitchen cabinet after bombing in Borodianka, and has come to represent the resistance 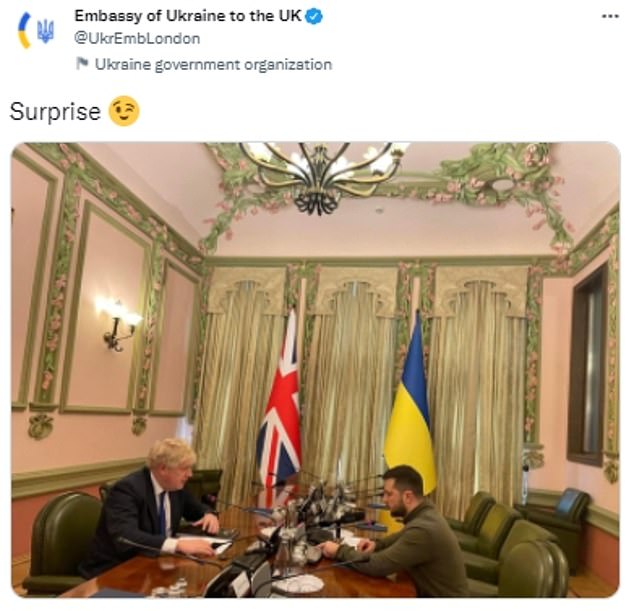 Details of the meeting had not been made public prior to the image’s release. The Embassy of Ukraine to the UK was one of the first to share the picture, writing: ‘Surprise’ with a winking face emoji (pictured)

Asked about his ’emotional response’ to seeing the destruction, she referred to a previous statement in which the Prime Minister praised the ‘heroism’ of Ukrainians in the face of Russian aggression.

She said the visit had been in planning for ‘several weeks’ but the final decision was taken on the advice of security officials on the day of travel.

Mr Johnson was presented with a ceramic cockerel as he walked through the streets of Kyiv with Mr Zelensky.

The premier seemed confused about the meaning of the gift in footage, querying whether it was used for pouring wine.

But it has become symbolic of the resistance after a photograph of one intact on top of a kitchen cabinet amid devastation from Russian bombing.

Asked if the Ukrainian president had explained the significance of the item, and whether it would be placed in the Downing Street office, she said: ‘I understand that he took that back with him to Chequers, so he has that.

‘And yes, he is aware that it has become a famous symbol of resistance.’

At a joint appearance with Mr Zelensky, Mr Johnson said ‘the Ukrainian people are a lion, and you are its roar’ as he vowed to send Ukraine 120 armoured vehicles and new anti-ship missile systems to help with the battle against Russia.

Mr Zelensky said: ‘The leadership of the united kingdom, in providing our country with all the necessary assistance in terms of defence, as well as leadership in sanctions policy, will go down in history forever.’