PM's FOUR-question ultimatum to Jeremy Corbyn ahead of TV debate

Boris Johnson will launch a full-frontal political attack on Jeremy Corbyn with an ultimatum to stop ‘dithering’ on his election and Brexit plans when the two leaders go head-to-head in an historic television showdown tonight.

The Prime Minister issued a challenge to his Labour counterpart warning that failure to answer on key points would leave the public with ‘no choice but to conclude that Corbyn’s Labour, propped up by the SNP, will mean dither, delay and uncertainty’.

In a letter published by the Tories last night he set Mr Corbyn four questions to answer: how he would vote in a second Brexit referendum, what Labour’s position on freedom of movement is, how much he would pay the EU for ‘market access’, and whether all his MPs would back his Brexit policy.

Tory sources said the Prime Minister would use the debate to hammer home his central message that only the Conservatives can be relied upon to deliver Brexit – while also raising concerns about Labour’s opposition to immigration  controls.

Tonight’s ITV debate from Salford is the first time the two largest party leaders have squared off on live television in an election debate. 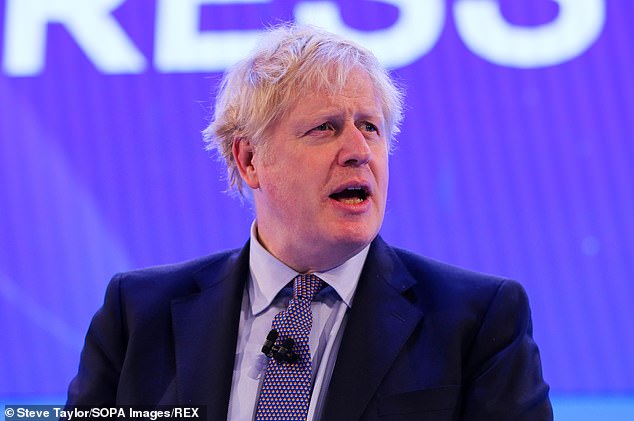 Boris Johnson and Jeremy Corbyn will clash in the first TV debate of the 2019 Christmas election on Tuesday night. (Pictured: The Prime Minister speaking at the Confederation of British Industry conference in London on Monday) 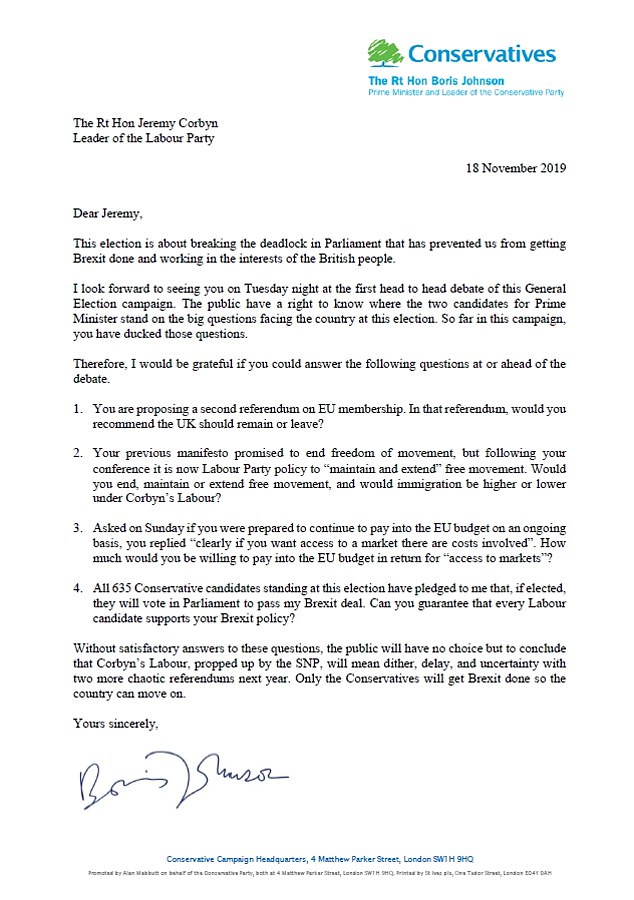 In a statement of intent, Mr Johnson last night wrote to his Labour opponent in an attempt to put pressure on him ahead of the debate

Previous debates have featured a wider array of leaders, but Theresa May refused to take part ahead of the 2017 election where she lost the Tory majority.

One ally of the PM acknowledged that it was a ‘risk’ to take on an opponent who is lagging far behind in the polls.

The debate: how it will work

The two leaders will go head-to-head in a television studio for the first time tonight.

The hour-long debate will be split into two halves, with the first devoted to Brexit.

There will be an audience of around 200 people at Media City in Salford.

Both leaders will stand behind lecterns, side by side on the stage.

They will get one minute each to make an opening statement and 45 seconds for a closing statement.

Jeremy Corbyn will go first with both after the two sides drew lots.

Between those they will face a series of questions submitted by ITV viewers and chosen to reflect a cross-section of society.

‘Corbyn has nothing to lose,’ the source said. ‘I’ll be sleeping a lot easier once it’s over.’

The Liberal Democrats and SNP yesterday lost a High Court challenge to have Jo Swinson and Nicola Sturgeon included in the debate. The two parties claimed ITV’s decision was unlawful because it breached impartiality rules. Lawyers for the Lib Dems claimed that with Labour sitting on the fence on Brexit, ‘the voice of Remain has been excluded’ from the debate.

But two judges ruled that the decision was not open to challenge in the courts and that the parties’ only recourse was to complain to Ofcom.

Tonight’s hour-long debate – with Julie Etchingham as the moderator – will be split into two halves, with the first devoted to Brexit.

Both sides believe that the debate is likely to be the first time that many voters engage with the election arguments. The first televised election debates in 2010 attracted audiences of close to ten million.

Tory strategists have told Mr Johnson to go after Mr Corbyn over his attempt to sit on the fence during the Brexit debate.

In his letter to Mr Corbyn last night, the PM said voters had a ‘right to know’ what Labour planned to do on key issues facing the country, adding: ‘So far in this campaign, you have ducked those questions.’

While Mr Johnson will hammer his opponent on Brexit, Tory strategists are urging him to also use the debate to paint a positive vision of life after Brexit, stressing his commitment to investing in public services like the NHS, schools and the police.

Mr Corbyn will attempt to press Mr Johnson on the fate of the NHS in a post-Brexit trade deal.

This election is about breaking the deadlock in Parliament that has prevented us from getting Brexit done and working in the interests of the British people.

I look forward to seeing you on Tuesday night at the first head to head debate of this General Election campaign. The public have a right to know where the two candidates for Prime Minister stand on the big questions facing the country at this election. So far in this campaign, you have ducked those questions.

Therefore, I would be grateful if you could answer the following questions at or ahead of the debate.

1. You are proposing a second referendum on EU membership. In that referendum, would you recommend the UK should remain or leave?

2. Your previous manifesto promised to end freedom of movement, but following your conference it is now Labour Party policy to ‘maintain and extend’ free movement. Would you end, maintain or extend free movement, and would immigration be higher or lower under Corbyn’s Labour?

4. All 635 Conservative candidates standing at this election have pledged to me that, if elected, they will vote in Parliament to pass my Brexit deal. Can you guarantee that every Labour candidate supports your Brexit policy?

Without satisfactory answers to these questions, the public will have no choice but to conclude that Corbyn’s Labour, propped up by the SNP, will mean dither, delay, and uncertainty with two more chaotic referendums next year. Only the Conservatives will get Brexit done so the country can move on.

Now that’s an EU turn: In his own flip-flopping words, how Jeremy’s story keeps changing

When asked by the BBC’s Andrew Marr on Sunday whether he wanted to leave the EU or remain in it, Jeremy Corbyn refused to answer five times. So what does the Labour leader, who was once an ardent Eurosceptic but has since called for a second referendum, really believe?

What he is saying now:

‘We’re going to put that choice to the British people and they will make that decision,’ he told Marr when asked if he wants to Leave or Remain.

What he has said in past:

Outlining his vision for ‘Britain after Brexit’ in a speech in February last year, Corbyn claimed Labour would see Brexit through. He said: ‘Labour respects the result of the referendum and Britain is leaving the EU.’ 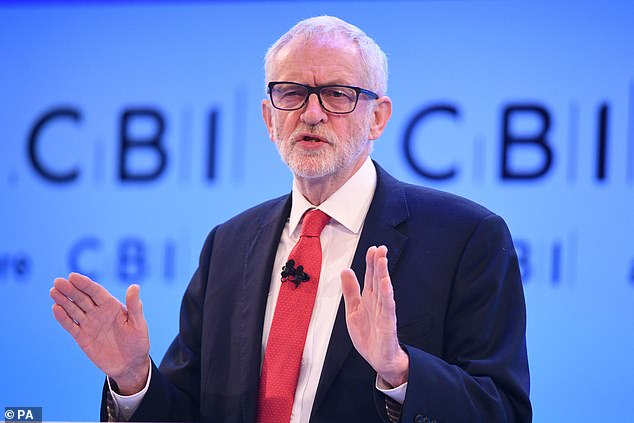 Jeremy Corbyn, pictured at the CBI conference in London on Monday, has continued to switch his position on Brexit

‘Three years after the EU referendum, the country stands at a precipice,’ Corbyn told The Observer in September, commenting on how he planned to thwart a No Deal Brexit. ‘[Boris Johnson] has no right to drive our country off a cliff and into the arms of Donald Trump with his No Deal fixation.’

For many years Corbyn advocated leaving the EU, deal or no deal. In 1993 he told Parliament that the Maastrict Treaty, which ratified further European integration, ‘takes away from national parliaments the power to set economic policy and hands it over to an unelected set of bankers who will impose the economic policies of price stability, deflation and high unemployment throughout the European Community’. Corbyn ultimately voted against the treaty, just as he had voted to leave the then Common Market in the first EU referendum in 1975.

‘I want a close relationship with the EU in future,’ Corbyn told Marr.

Corbyn certainly didn’t want ‘a close relationship with the EU’ in 1996 when he described it as a ‘European bureaucracy totally unaccountable to anybody’. Indeed, as late as June 2015 – just a year before the referendum – he wrote in a blog for the Huffington Post website that ‘there is no future for a usurious Europe that turns its smaller nations into colonies of debt peonage’. 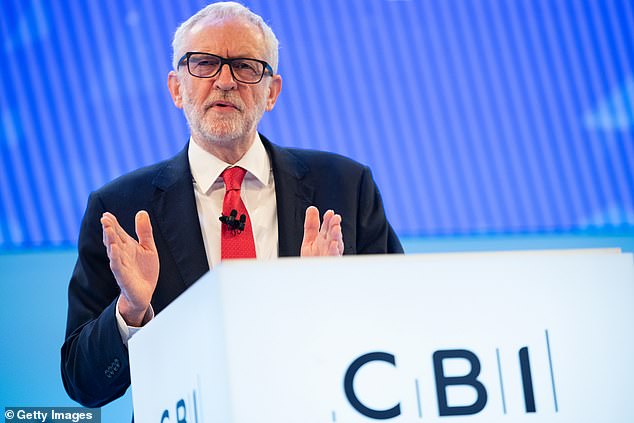 Speaking to the BBC ahead of the Labour conference in September, Corbyn laid out his vision for a future relationship with the EU: ‘We have consistently put forward what I believe to be a credible option, which is based on five pillars – the customs union, the trade relationship, protection of consumer and environmental rights, and, of course, the Good Friday agreement.’

In 2008 when then Prime Minister Gordon Brown asked the Commons to approve the Lisbon Treaty, which centralised EU power, Corbyn reminded Parliament that the EU had ‘always suffered a serious democratic deficit’ and promoted ‘ever-limiting powers for national parliaments and an increasingly powerful common foreign and security policy’.

‘My whole strategy has been to try to bring people together on both sides of the argument,’ he told Marr.

For the majority of his parliamentary career, Corbyn’s remarks were anything but unifying. Even during his campaign to be Labour leader in 2015, Corbyn didn’t mince his words. At one hustings, he said: ‘I’m concerned about the way that European Union is increasingly operating like a free market across Europe, tearing up the Social Chapter, damaging working-class and workers’ interests across Europe… ‘

At another point during that campaign, he said: ‘If Europe becomes a totally brutal organisation that treats every one of its member states in the way that the people of Greece have been treated at the moment, then I think Europe will lose a lot of support from a lot of people.’