Singapore: Foreign Minister Penny Wong has spoken to China’s Foreign Minister Wang Yi for the third time in five months, paving the way for a meeting between Xi Jinping and Anthony Albanese at the G20.

The two leaders are expected to cross paths at the meeting of the world’s 20 largest economies in Bali next week after three years of tension dominated by trade strikes, disputes over COVID-19 and human rights. 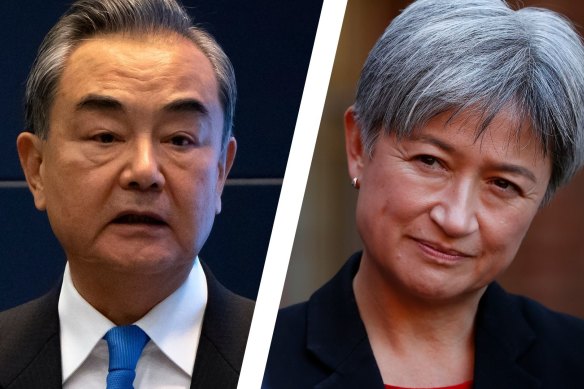 But China’s Foreign Ministry said on Tuesday that the relationship had “seen positive changes” in recent times.

“China and Australia should gradually address each others’ legitimate concerns,” the Foreign Ministry quoted Wang as telling Wong on Tuesday evening.

The concession, which noted Australia’s concerns as well as China’s, is a departure from years of heated rhetoric that saw Beijing accuse Australia of treating it as an “adversary” or “threat,” while labelling it as the “deputy sheriff” of the United States in the region.

China implemented trade strikes on $20 billion worth of Australian exports throughout 2020 and 2021, restricting imports of half-a-dozen items including coal, beef, wine and barley into China. Australian exporters say they are still struggling to access what was once their most profitable market.

On Tuesday, the foreign ministers discussed trade and consular matters pointing to the major areas of dispute between the two countries. Wang was elevated to the Politburo at the 20th National Party Congress in Beijing in October, putting him in charge of implementing China’s foreign policy after the retirement of veteran Yang Jiechi, the 72-year-old who oversaw deepening animosity between China, the United States and its allies.

The last time an Australian prime minister met with Xi was in 2017 on the sidelines of the G20 in Hamburg. The meeting between Malcolm Turnbull and Xi preceded the Turnbull government’s decision to ban Huawei from the 5G network and the introduction of foreign interference laws that were widely seen as targeted at the Chinese Communist Party.

China’s ambassador to Australia Xiao Qian has been pushing for a meeting between Albanese and Xi since he was appointed in February.

“When there is really a wish and will from both sides, I would love to see a top-level meeting between our two countries,” Xiao said.

Albanese said in September that he would welcome discussions with the Chinese President. Xi secured a third term in office in October as well as a cabinet full of loyalists that were expected to implement his domestic and foreign policy agenda for at least the next five years.

“I’m open to dialogue with anyone at any time, particularly with leaders of other nations,” Albanese said.

Lowy Institute Director of Research Hervé Lemahieu said in October that government and business should temper their optimism and continue to diversify.

“Even as bilateral relations stabilise, trade relations are not likely to normalise,” he said.

“The lessons Australia has learned over the past two years should guide governments in planning for a future of uneasy economic interdependence with China. The sectors in which bilateral trade has continued to prosper are not those in which Australian producers are dependent on China, but rather where the two countries are interdependent.”