Puerto Rico crippled with closures and outages post-Fiona. Here's what travelers can expect

Ricardo Fuentes-Ramírez lives and works in the western Puerto Rican townof Mayagüez, located right next to Cabo Rojo, where he said the “eye of the hurricane made landfall.”

Hurricane Fiona ripped through the island on Sept. 18, flooding homes and businesses and leaving, at times, the entire island vulnerable and in the dark.

Nine days after the storm, Fuentes-Ramírez, an assistant professor of economics at the University of Puerto Rico-Mayagüez, said there were still trees and utility poles on the ground around Mayagüez. Electricity and water havebeen gradually returning to homes and buildings – just as gas stations were running into “worrisome” lows. “I am one of the lucky few who has both,” he said, noting that most businesses remained closed.

“The recovery efforts, in general, have been frustratingly slow,” he added, echoing sentiments fellow Puerto Ricans shared with USA TODAY. “Most Puerto Ricans question the speed of the recovery, considering this was only a Category 1 hurricane. Just after the hurricane, we had a heat wave, which, combined with the lack of power and water, led to a generalized feeling of frustration and despair.”

Fuentes-Ramírez hasn’t noticed a difference in recovery in tourist and non-tourist areas on his end of the U.S. territory, but travelers who visit Puerto Rico without venturing beyond their resorts may not notice the damage at all.

“Hurricane Fiona was a setback, not a reset,” Brad Dean, CEO of Discover Puerto Rico, told USA TODAY. “Thankfully, we’ve already seen many hotel partners, restaurants and tourist attractions resume regular operations and are expecting a staggered opening of others.”

The metropolitan areas where tourists frequent, like San Juan, did not receive “significant damage” compared to southwestern parts of the island, he added.

At this point, most major cruise lines are not expecting disruptions to itineraries.

“As of today, we don’t have any impact to future sailings to Puerto Rico,” a Royal Caribbean International spokesperson told USA TODAY via email on Oct. 3.

“Although some areas are still impacted, tourism is an important economic driver for the island and we are welcoming tourists to support our local businesses in the areas less impacted by the storm,” Dean said. With tourism’s important role in Puerto Rico’s economy – in August, 90,300 people were employed by the industry – Dean urges travelers to support local businesses during their stay.

He suggests travelers reach out to their travel providers, hotels, and local businesses directly to inquire about any changes in operations.

The big picture: See the scope of Hurricane Fiona’s damage in Puerto Rico in charts and graphics

Left in the dark 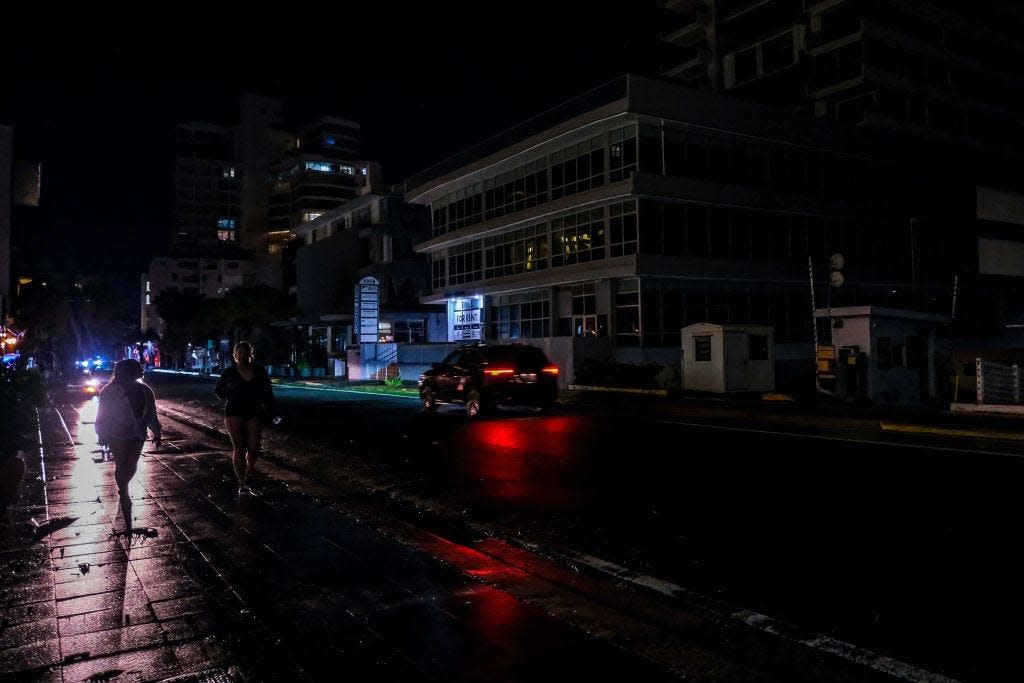 “You can have a nice hotel. Well, once you walk out, there’s not that many things you’re going to be able to access routinely,” Diego Alcalá Laboy said the week after Hurricane Fiona hit. “For example, you may have one street that has electricity, and streets over will not have electricity, or in certain areas, you have electricity for a period of time, and then it goes away.”

Alcalá Laboy, a defense attorney and activist against systemic injustice, lives in San Juan’s Santurce neighborhood and, like much of the metropolitan area, was spared the devastation experienced elsewhere, but he did expect to lose power.

“We were expecting this because the new electric company has not been able to maintain the system,” he said of LUMA Energy, which transmits and distributes power across the island.

The entire island experienced a blackout before Hurricane Fiona made landfall, and Alcala says blackouts are not uncommon even without hurricanes.

As of Monday, LUMA’s website said 98% of Puerto Rico’s power had been restored. “Critical parts of the electric grid and generation facilities in these regions were severely damaged,” a LUMA press release from Saturday said. “Crews are continuing to make progress restoring power despite ongoing local weather challenges, difficult terrain, as well as roads washed away from Hurricane Fiona.” A LUMA spokesperson did not answer further questions from USA TODAY.

Some locals disagree with the stat provided by LUMA. “A lot of people are saying they’re lying about the numbers,” said Carlos Torres Ramos, a professor who lives in Cabo Rojo.

Fuentes-Ramírez heard the same thing. “Most towns still have what folks here are calling ‘pockets’ where power has not been restored,” he said.

Stay or go?: Will more Puerto Ricans leave the island for the mainland US after Hurricane Fiona?

When Torres-Ramos stepped out of his home after the storm, he said, “It looked like a war zone. The trees were down, the power lines were down.” More than a week later, he said they were still down, and he had no idea when they would be repaired. He lost power and running clean water, but his home was OK and he had water stored.

“After (Hurricane) Maria and even before Maria, most of the houses have a water tank … because one, after a hurricane, you know that it’s not going to come back fast, and two, most of the places depend on power to get those water pumps running,” he explained.

He also had a generator.

“We’re fortunate and very privileged to have not only generators but also to have the resources to buy gas, but not everybody’s in our same position,” he said.

Alcala said some of his clients didn’t have enough diesel in their generators to make it through the night and said electricity is expensive even duringregular times. The average monthly energy bill for Puerto Ricans is $438.21, compared to $169.49 elsewhere in the U.S. Part of this is caused by the island’s sole electric utility, PREPA’s, which is operated by LUMA, debt crisis and imported petroleum.

The haves and have nots

Arturo Massol-Deyá, executive director of Casa Pueblo in Adjuntas, says tension has grown as Puerto Rico gentrifies thanks to tax incentives for high-income U.S. citizens to move there.

“If you think about who from Act 20, 22, those privileged people, rich people coming to Puerto Rico, who from them has suffered,” Massol Deyá said. “They have solar power. They have alternative energy sources. They live in good houses. Their houses are not going to get flooded because they’re in good locations. … They get power first. They get resources, which I kind of understand why in a way, but the resentment among the Puerto Rican population is becoming bigger.”

Puerto Rico’s poverty rate in 2019 was 43.5%, with higher rates for those in more remote, countryside areas. 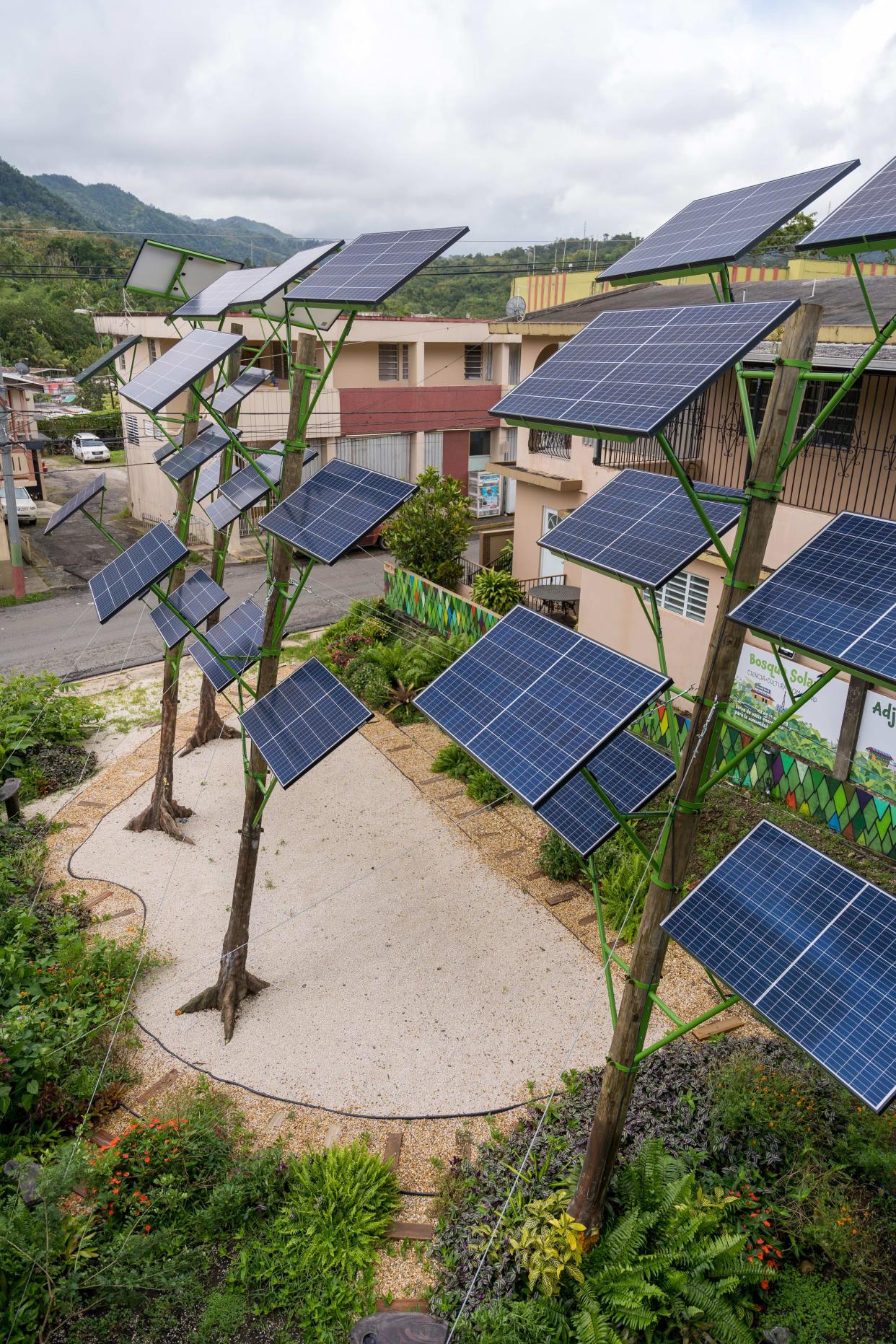 “It’s worth noting that when one compares socioeconomic indicators in the San Juan metropolitan area with those of the rural Center and Southwest, it’s like looking at two different countries,” Fuentes-Ramírez said. The hurricane’s impact on the poorest side of the island only “made matters worse.” He said he’s seen protests around his neighborhood, where the residents “feel forgotten and abandoned.”

Massol Deyá says it doesn’t have to be that way, and Casa Pueblo shows how. The community-based environmental justice organization has been experimenting with solar power since 1999 and has helped neighbors in need after both Hurricanes Maria and Fiona.

“In our community, we have been promoting energy generation at the point of consumption, so we have a solar cinema. We have a radio station running on solar,” he said. “Our radio station was broadcasting in the middle of the storm, and the day after we were able to be open and started to provide services to the community.”

Massol-Deyá says the technology is available to others and relatively inexpensive, “But it’s resources. Poverty levels in Puerto Rico are high, and investment is not easy.”

He said the government discourages people to transition to solar energy and threatens people with taxes. “They have added layers of complications, like requirements that make installation more expensive. So they will say yes, you can do it, but in practical ways, they’re making things harder.”

How can I help Puerto Rico recover from: Mutual aid, nonprofits to support 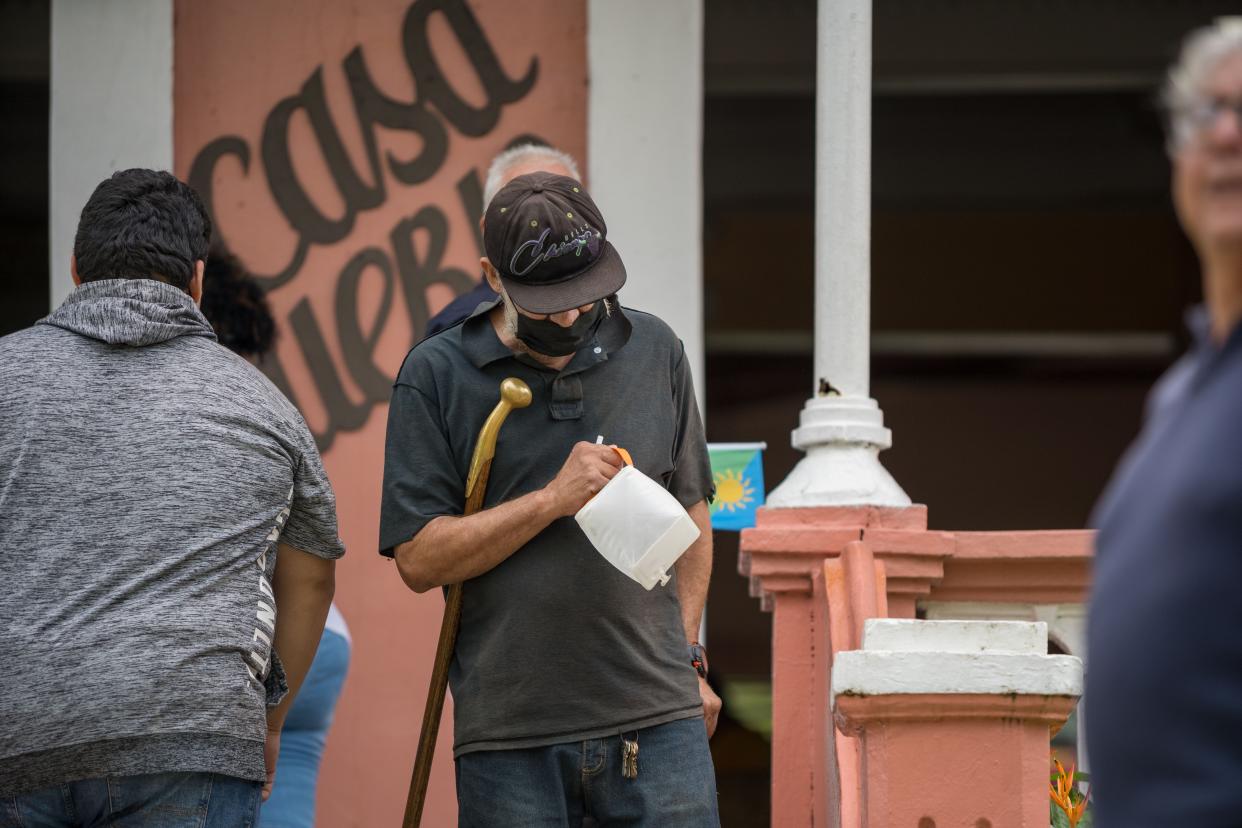 “We really need tourism now more than ever,” he said.

That goes for the whole island.

“If they want to learn what Puerto Rico is all about, staying in San Juan and those areas is not gonna give you that opportunity,” Massol-Deyá said. “Puerto Rico is more complicated, is more diverse. And there’s some beauties and challenges. I mean, it will be a missed opportunity if you just want to have fun and stay at the beach.”

This article originally appeared on USA TODAY: After Hurricane Fiona, here’s what travelers can expect in Puerto Rico