It WON’T be ‘business as usual’ with China after coronavirus crisis is over, warns Dominc Raab as he calls for ‘hard questions’ for the Communist state over secrecy and spread of virus

Dominic Raab took aim at China tonight, warning the hardline Communist state it faces ‘hard questions’ about the source of the coronavirus pandemic.

The Foreign Secretary and temporary UK leader said there would have to be a ‘deep dive’ into the facts around the outbreak, which started in the Chinese city of Wuhan.

After telling the nation it faces at least a further three weeks under lockdown he said that there could be no flinching from a hard examination of what had happened.

It came as Beijing today said the WHO has found no evidence coronavirus was man-made, fending off accusations that it was created in a Chinese lab in Wuhan.

Taking questions this evening Mr Raab said: ‘I think there absolutely needs to be a very, very deep dive after the event review of the lessons – including of the outbreak of the virus – and I don’t think we can flinch from that at all, it needs to be driven by the science.’

He said the UK had good co-operation with China in relation to the return of UK nationals and in procurement of equipment.

‘So we ought to look at all sides of this and do it in a balanced way, but there is no doubt we can’t have business as usual after this crisis, and we will have to ask the hard questions about how it came about and how it couldn’t have been stopped earlier.’ 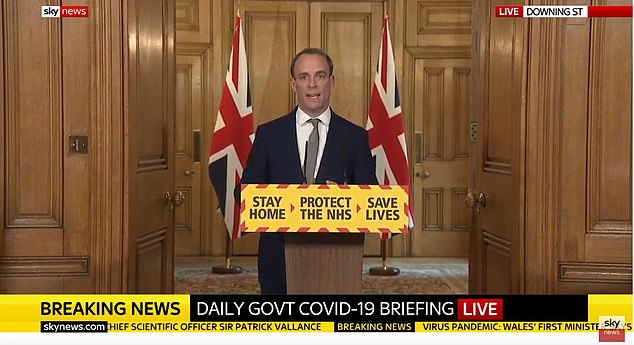 The Foreign Secretary and temporary UK leader said there would have to be a ‘deep dive’ into the facts around the outbreak, which started in the Chinese city of Wuhan 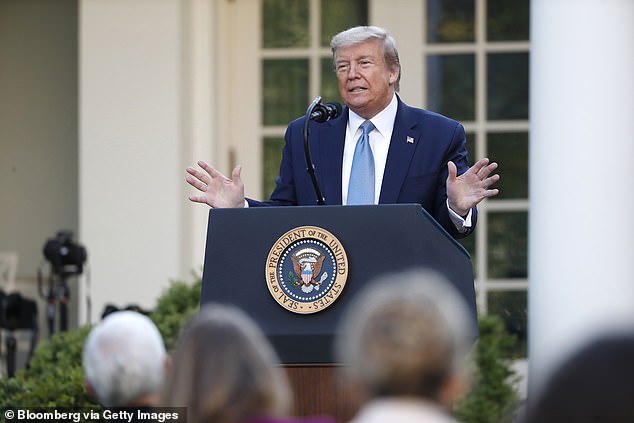 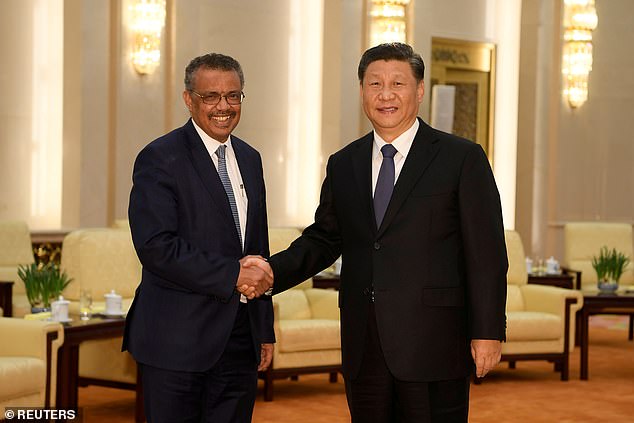 WHO chief Tedros Adhanom Ghebreyesus and Chinese President Xi jinping before a meeting  in Beijing in January. Mr Trump has accused the WHO of parroting erroneous information about the virus fed to it by China

Trump halted $500 million of funding to the WHO this week and slammed the body that had ‘failed in its basic duty’ in its response to coronavirus by failing to stand up to China.

He said yesterday his government was ‘doing a very thorough examination of this horrible situation,’ while US Secretary of State Mike Pompeo said the Chinese ‘need to come clean’ on what they know.

But China’s foreign ministry spokesman Zhao Lijian told Thursday’s daily briefing that WHO officials ‘have said multiple times there is no evidence the new coronavirus was created in a laboratory.’

It came after scrutiny of Wuhan’s Institute of Virology – first reported on by the MailOnline in January – came to head this week after The Washington Post published leaked State Department cables warning of the lab’s safety standards in 2015.

Mr Raab had earlier taken his seat alongside world leaders including Mr Trump as he represented the UK at a virtual G7 conference on coroanvirus.

In the ongoing absence through illness of Boris Johnson he joined leaders including US president Donald Trump to discuss how to reduce the economic impact of the pandemic that has effectively shut down global trade.

In pictures released by Downing Street he was showing in a No 10 briefing room with aides, and other world leaders on a large screen in front of him.

Speaking afterwards, Canadian prime minister Justin Trudeau said: ‘We all remain committed to doing whatever it takes to help people and our economies rebound after this crisis.’

There was no immediate communication from No10 on the discussions over whether Mr Raab had challenged Mr Trup, whose nation chairs the G7 currently, on his decision to defund the WHO.