‘I’m good’: Robert De Niro breaks his silence after thief was caught stealing presents from his Christmas tree while he slept upstairs in the $69,000-a- month rented NYC townhouse : Star ran down in his bathrobe as cops arrested suspect

Robert De Niro has broken his silence after a thief was caught stealing presents from underneath his Christmas tree while he slept upstairs in his $69,000-a-month rented NYC townhouse.

The actor, who ran downstairs in his bathrobe as officers arrested the suspect, said ‘I’m good’ when asked by reporters outside his home on Monday afternoon.

The 79-year-old star added that he was ‘OK’ as he left the property wearing a black beanie, a black and grey striped scarf, and running shoes.

Shanice Aviles, 30, the serial burglar allegedly caught stealing Christmas presents from De Niro’s townhouse in the Upper East Side smiled as she was led from a nearby police station in cuffs. 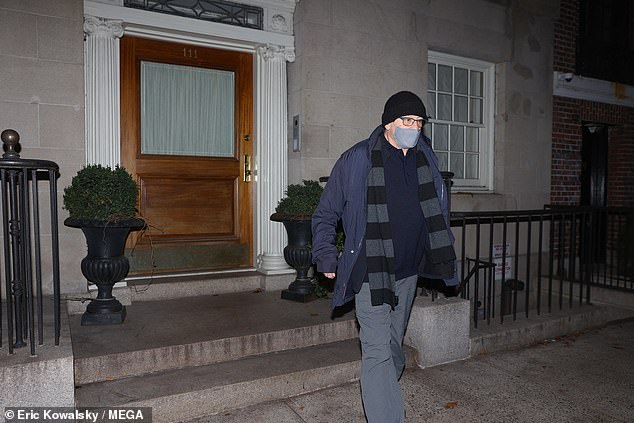 The 79-year-old star said that he was ‘OK’ as he left the property wearing a black beanie, a black and grey striped scarf, and running shoes 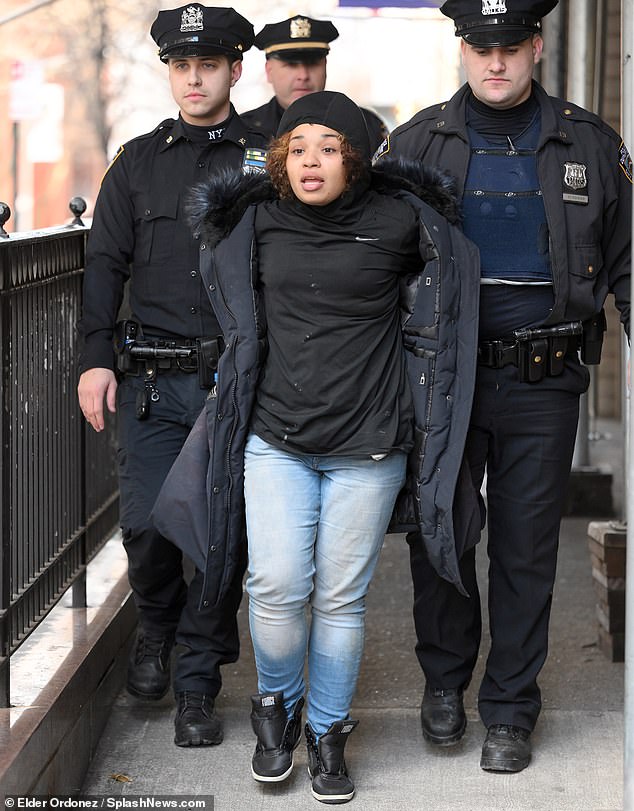 A locksmith arrived at the townhouse yesterday to fix the basement door where Aviles allegedly entered, the New York Post reported.

Officers continued to visit the property throughout the day, with a NYPD cruiser parked outside.

Meanwhile, eight bags of takeout from Japanese fusion eatery Nobu arrived at the star’s home, as well as a delivery from Dominique Ansel Bakery, the news site reported.

As Aviles was escorted from the 19th Precinct station house on Monday evening, she shouted to reporters, ‘I didn’t go to Robert De Niro’s house,’ adding, ‘I didn’t murder anybody!’ the New York Post reported.

Aviles has been charged with the incident after being arrested for breaking into 79-year-old De Niro’s home in the early hours of Monday morning and attempting to steal presents from beneath his Christmas tree.

She was being followed by NYPD officers at approximately 3am on Monday morning when she broke into De Niro’s seven-bedroom, East 65th Street townhouse. 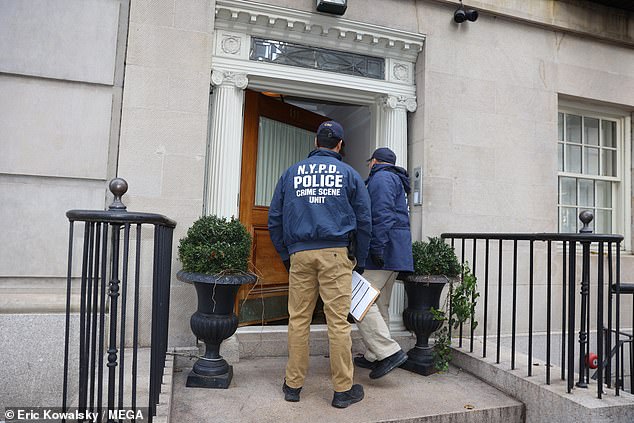 Officers continued to visit De Niro’s townhouse throughout the day, with a NYPD cruiser parked outside 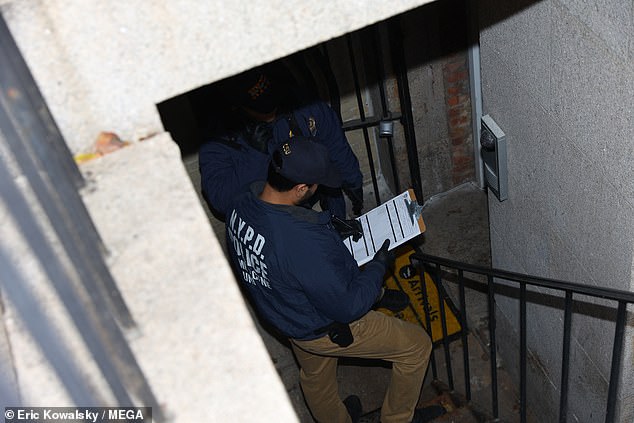 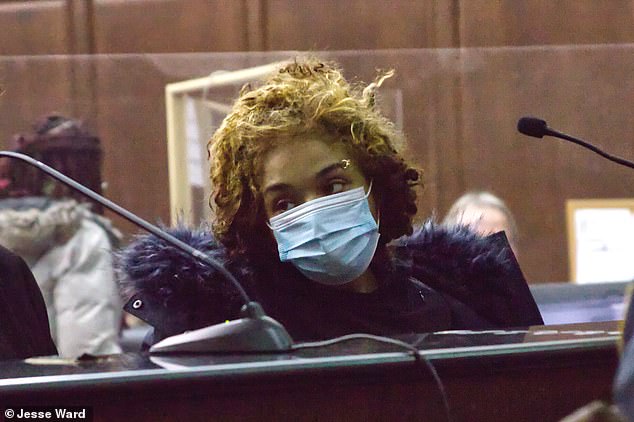 Shanice Aviles, 30, at New York Criminal Court where she was arraigned for burglary in the second degree 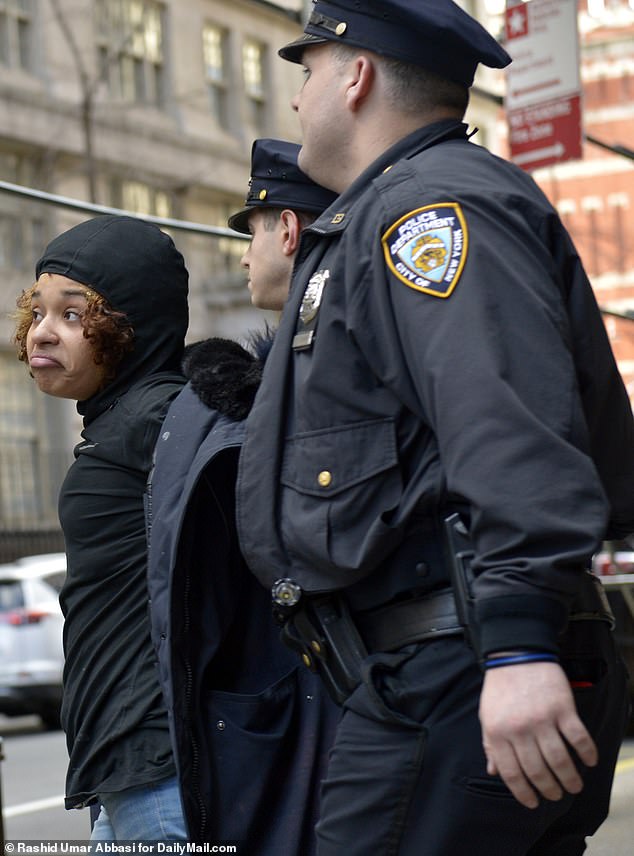 Aviles yelled ‘at least I didn’t stab anybody!’ as she was led out of the police station

When police arrived they found her trying to place gifts into a bag and playing around on the actor’s iPad.

She was already wanted for a string of other burglaries, and has been arrested 26 times before, including 15 times just this year.

According to CBS New York she was arrested most recently on December 13 and around a month earlier when she stole $700 from a Catholic Church in Astoria.

There was an open warrant on Aviles after she skipped a court-ordered drug rehab last week.

She was caught because police were following her in the early hours of the morning and watched her make numerous attempts to enter commercial buildings in the area.

According to police she was seen trying a few doors before she slipped away around a corner. By the time the officers caught up with her they noticed a door to a townhouse was open. 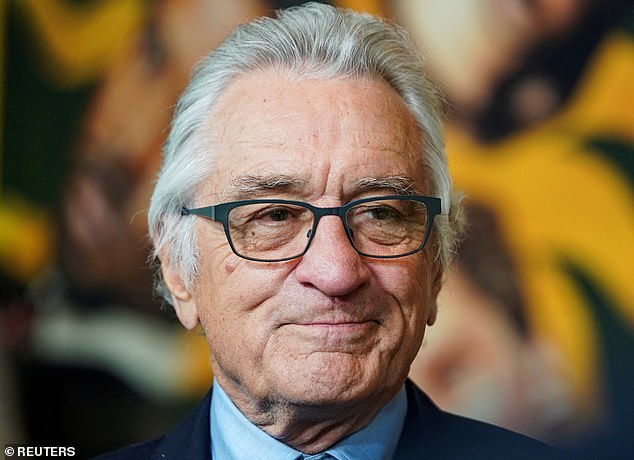 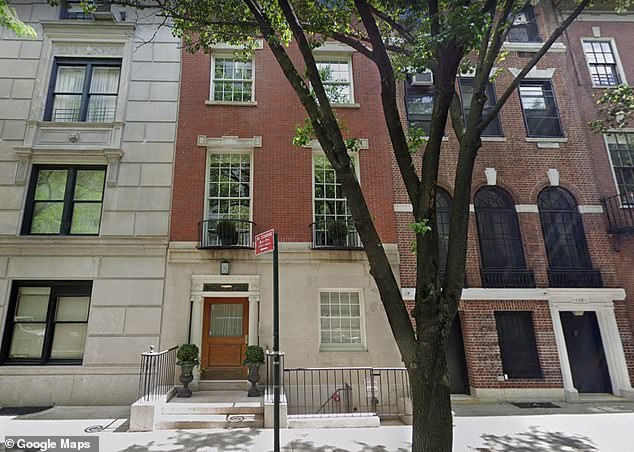 De Niro’s seven-bedroom townhouse on the Upper East Side. He awoke to the commotion of cops confronting the burglar downstairs 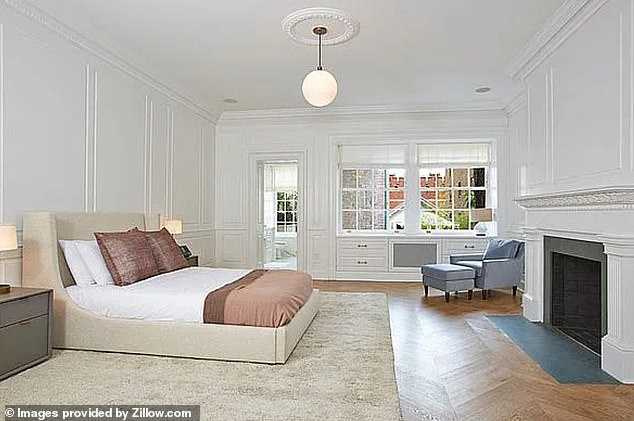 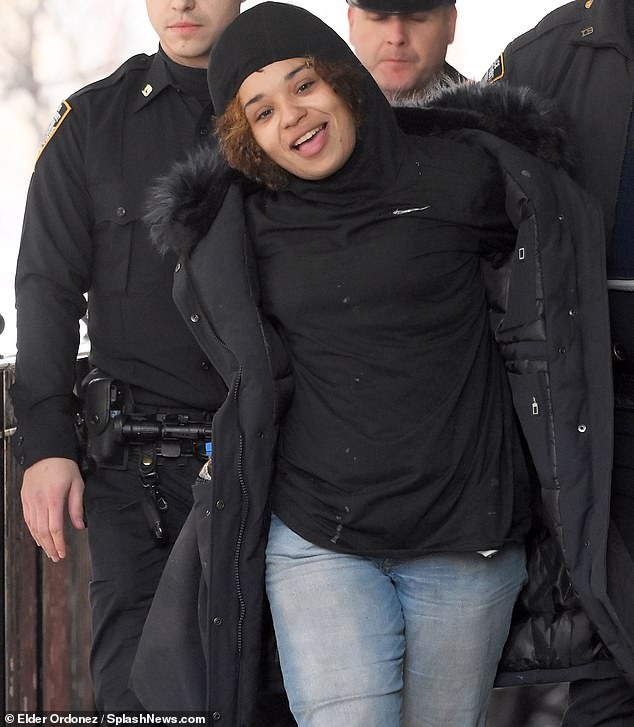 Police have said there were signs of forced entry and that she made her way into the building via a basement door.

It is not clear how closely Aviles was being followed and therefore how easily she was able to enter the house without being stopped.

De Niro was initially asleep upstairs in the townhouse he rents for around $50,000 a month, but woke up to the sounds of the commotion and came down in his bathrobe as Aviles was being arrested, police told the Post.

They found her trying to put gifts underneath De Niro’s tree into a bag, and she was also using the star’s iPad, ABC 7 reported.

Aviles was charged with burglary and taken to the Lenox Hill precinct before being taken to Manhattan Criminal Court for her arraignment.

As she was escorted from the station she wore blue jeans, a black Nike sweater, a wool cap and a black parka that she used to cover parts of her face.

Police sources told the Post they did not think Aviles knew beforehand that she was entering the famous actor’s home. 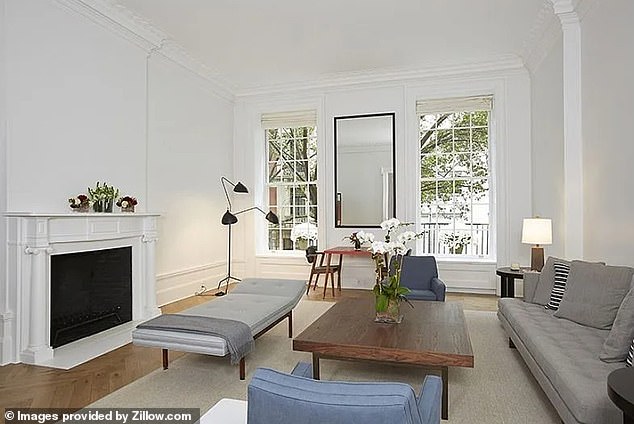 Cops found Aviles stashing presents from under the tree into her bag. She was also playing with De Niro’s iPad, they said

At the time De Niro’s daughter was also at home sleeping in another bedroom.

The actor split from his second wife Grace Hightower in 2021. The pair share an 11-year-old daughter.

De Niro, who grew up in Manhattan, sold the West Village townhouse in which he had lived for 37 years for $9.5million in 2012. During the pandemic he moved to stay in one of his houses in upstate New York.

Stan Rosenfield, a PR representative for De Niro, issued a brief statement indicating the actor would not be commenting on the robbery.

‘We are not making any statement at this time about the robbery at the temporary rental home of Robert De Niro,’ Rosenfield said. 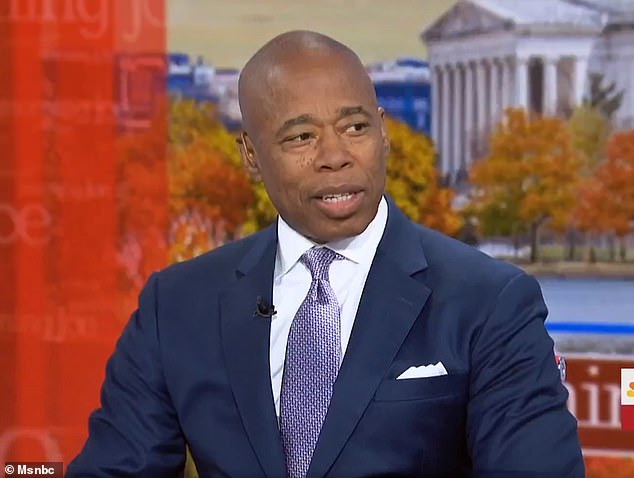 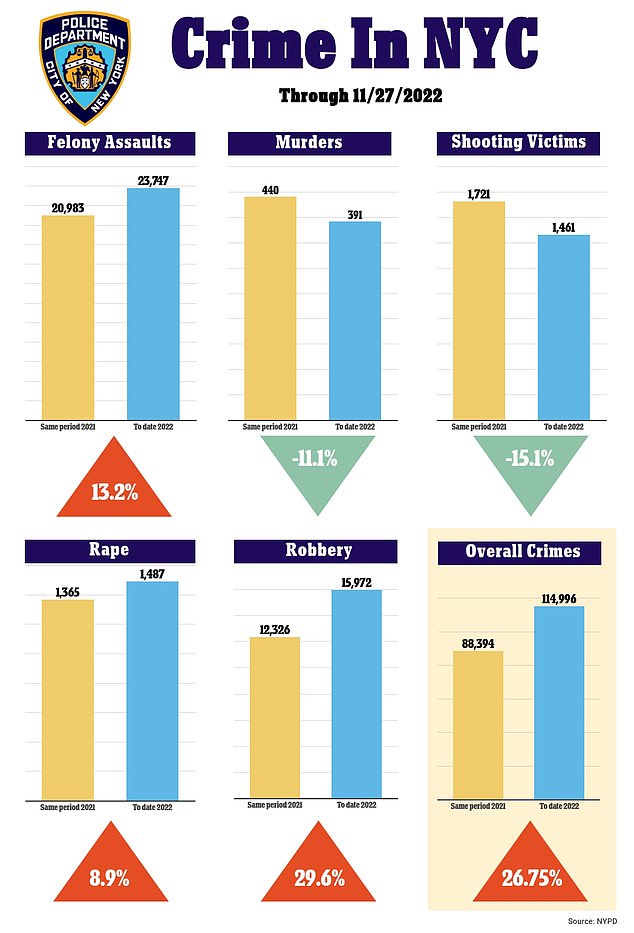 Crime in New York City has been rising over the last several years, thanks largely to a 2019 bail reform that all-but did-away with cash bond

Hochul inherited the governorship of New York from Andrew Cuomo last year. She was re-elected in Tuesday’s midterm on a narrower-than-expected margin, and has been widely panned for her soft stance on crime and bail reform.

The bail reforms implemented in 2019 do away with cash bond in most instances, a progressive idea that has meant many criminals are released back onto the streets within hours of being picked up.

‘This catch, repeat, release system is just destroying the foundation of our country. And that’s why we are losing this election,’ he told MSNBC’s Morning Joe last month.

‘Six out of 10 New Yorkers in the Hispanic and Asian community voted Democrat compared to seven to eight out of 10 last time. We are losing the base black and brown who really believe in those basic things. Public safety, housing, education,’ the former cop said.

‘We cannot talk our way out of this. We have to be real what people are facing on the street.

‘We must return to Albany… too many people in Albany, they have dug in and say, “If we change this small number of offenders and go after them, that we are relinquishing a reform that I advocated for.”

‘To not recalibrate is a big mistake because there are too many people… that are repeated offenders. They have made up their mind that they’re going to be violent in our streets, and the unpredictableness of their behavior is really…’