Vasya Turda, 14, posing with an assault rifle – he was branded a ‘maniac’ by his victim’s father

A tycoon’s 14 year old son has been jailed for murdering his friend in a frenzied knife attack ‘after losing a computer game’.

The boy, named in Ukraine as Vasya Turda, had been given new computer games by his rich father, a court was told.

He invited his friend named as Vasya Pop, 15, to his family’s mansion to show off his new gaming system.

But several hours later Vasya Pop’s neck was cut with a knife and had a total of 27 stab wounds at his house in Nizhnyaya Apsha, known as Ukraine’s wealthiest village.

The boy’s body was found by his friend’s grandmother.

‘He stabbed my son with a knife,’ said Mikhail Pop, the victim’s father.

‘He had 27 stab wounds, his head almost severed, his neck cut from ear to ear.

‘This was the first strike, the experts told me.

‘Then he abused the corpse.’

The grieving father branded the attacker ‘a maniac’.

A ‘conflict’ between the teenagers is believed to have arisen over the outcome of a computer game, said reports on the case citing law enforcement. 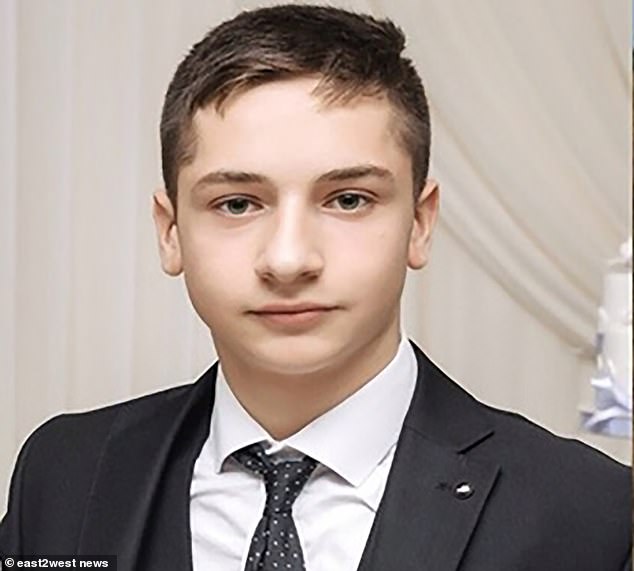 Vasya Pop, 15, suffered 27 stab wounds and his neck was said to be so badly cut his head was almost severed

‘Vasily Turda attacked his mate when they played on a console on the second floor (of the mansion),’ said one account.

Vasya Pop fled with blood pouring from his his badly wounded neck.

He ran down to the ground floor as Turda chased him wielding a knife.

Police pictures show a trail of blood was strewn through the large house.

Vasya Turda – whose father Vasily is a wealthy businessman – was convicted of ‘murder committed in the heat of passion’ as they played computer games.

He was sentenced to three and a half years by a Ukrainian court.

The court heard allegations that the victim had provoked the attacker with ‘unlawful violence, systematic harassment or grievous insult’. 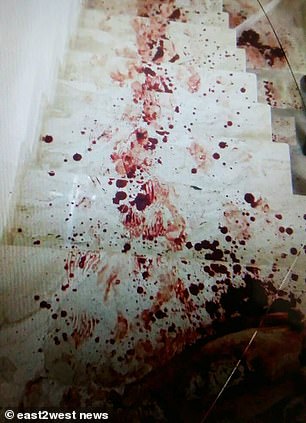 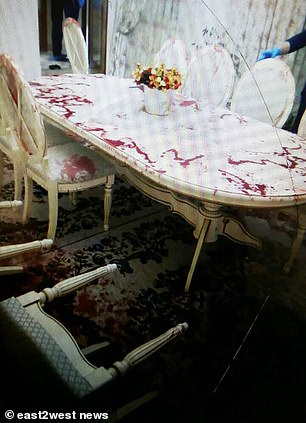 A blood trail leading down the stairs (left), after stabbing the boy Turda chased him with the blade; more blood trails (right) can be seen on a dining room table at the mansion in Nizhnyaya Apsha

In an earlier dispute, it was claimed Vasya Pop had pulled down his pal’s trousers in the presence of girls in a cafe.

But regional prosecutors are now demanding the sentence should be increased to 15 years, say reports.

The exact computer games the teenagers’ were playing were not revealed.