A week after Japanese midget submarines killed 21 sailors on the converted ferry HMAS Kuttabul in Sydney Harbour, 80 years ago next week, there was a bombardment of the eastern suburbs.

Woollahra Municipal Council minutes from June 8, 1942, record the mayor saying: “I feel it is my duty to report that history was made last night when Woollahra was shelled from the sea … by submarines.”

Marie Dyer was a 16-year-old schoolgirl living in Bondi when the bombardment from submarine I24, lying some 14.6 kilometres south-east of Dover Heights, got under way. 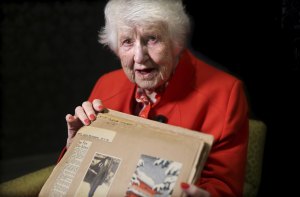 Marie Dyer, 96, holds her photo album with the picture given to her by Susumu Ito, the Japanese pilot.Credit:James Alcock

“It was lights out at night. You had to keep all your windows shaded,” Dyer, who is now 96, said.

“We lived in a semi-cottage in Hall Street and my father was a warden out working, checking on people’s curtains. The bombs started hitting our streets and one fell just a few streets away in front of a friend’s home and left a big crater and they had to get out.

“My mum was at home with five children and she didn’t know what to do, so she shoved us all under the dining room table. I was a bit cranky because I was a busybody and wanted to see it all but my mother wouldn’t let me out of the house. We went back to school [the next day] and talked about it.”

Despite bombs falling in several sites across the eastern suburbs, there were only minor injuries. Few survive to recount the events of that night but Dyer’s story (she still lives near Bondi) gets better.

There was a lady in the district who ran a concert group that visited schools, singing and performing plays, and they became friends.

“She was the one who organised the concert party for the government to go to Japan to sing for the troops who were occupying Japan when the war finished,” Dyer said. “She asked me if I would like to join the entertainment unit that was going to Japan.

Dyer met someone from the air force who told her he was stationed in Iwakuni (40 kilometres south-west of Hiroshima), where there was a fishing shop. The next day the man took her to the shop, where she met the owner, Susumu Ito.

“When he found out I was from Sydney he just told me in the conversation he had flown over Sydney the night before [the submarine attack]. I said, ‘Would you have a photo that I could have just to put in my album’.”

Dyer, clutching the album with the photo pasted in it, said she didn’t realise at the time who Ito was. He was Warrant Officer Susumu Ito, the pilot of one of two biplanes that took off from a Japanese mother submarine to make a reconnaissance flight over Sydney before the midget submarine attacks.

“Mr Ito had probably flown over my Bondi home,” she said.

A new book, Attack on Sydney Harbour 1942 by military historian Tom Lewis, contains an account by Ito where he says he took off about 55 kilometres from the entrance to Sydney Harbour on May 29 at 2.47am.

“[I] flew over North Head at an altitude of about 500 metres, watching out for an artillery base there. But when I turned my eye to the city I found there was no blackout in force. Merchant ships moving about the harbour were fully lit. It was clear to me that Sydney wasn’t on alert. It was a carefree atmosphere.” 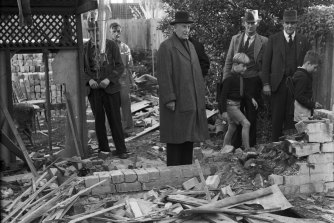 Governor-General Lord Gowrie visits the homes of Mr McEachern in Bellevue Hill that was destroyed during the Japanese attack on Sydney Harbour.Credit:Fairfax archives

Lewis told the Herald Sydney’s preparation for the threat of attack was “a massive failure on many levels”.

“The book says it was one of the greatest cover-ups in Australian military history. It was disgraceful really. The two senior commanders, Admiral Muirhead-Gould of the Royal Navy and Captain Howard Bode of USS Chicago [the intended target of the midget submarines] thoroughly stuffed it up on the night.”

Of the ships in the harbour supposedly keeping watch, he writes: “Most had many personnel off enjoying the delights of Sydney, which … was by no means shut down.”

A boom net intended to keep submarines out was unfinished, with channels at each end, and there were other deficiencies in Sydney’s defence planning due to a lack of urgency and lack of funding going back to the start of the war.

Dyer said if Ito had ever come to Australia, she would have loved to meet him again.

“I never did see him again. I would have liked to have, but I didn’t.”

Earlier this month there was a service at St Brigid’s Church in Coogee that celebrated her life. “I told the family if somebody is going to say something nice about me, I want to hear it. I don’t want to be the one in the coffin going up and down the aisle. We had a beautiful mass, I think I sang and I had one glass of champagne.”

Back in 1942, life went on in Woollahra. The next item on the council agenda that night after the bombing was a petition. Residents were concerned about Ciro’s nightclub in New South Head Road, where degenerate persons “carry on dancing and revelry to the accompaniment of a great deal of unnecessary noises.”