The terror group struck out in Tank, Khyber Pakhtunkhwa province on the second day of a five-day anti-polio drive in a bid to vaccinate more than 6million children.

Two gunmen riding a motorbike ‘opened fire’ on a police security detail that was escorting the polio vaccinators – killing one on the spot and critically wounding another, eyewitnesses confirmed.

Mohammad Khurasani, spokesman for Tehrik-e-Taliban Pakistan, known as the Pakistani Taliban, claimed responsibility for the attack.

The Taliban had previously denounced the polio vaccine as a ‘Western conspiracy’ and ‘bio-weapon’ that would endanger children.

The terror group promised violent attacks against those found to be supplying and using it.

Saturday marked the first time the TTP had attacked those involved in a vaccination effort since announcing the end of a one-month ceasefire with the Government. 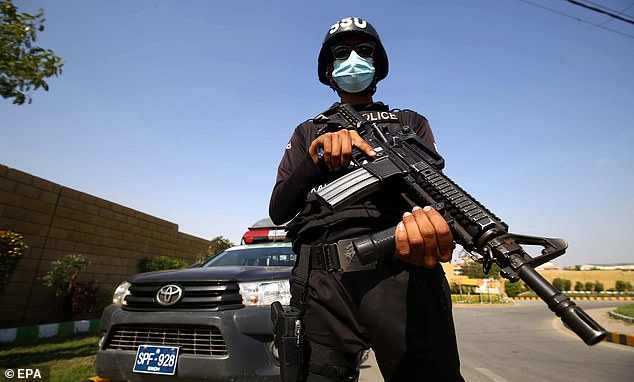 Two police officers were shot, one killed, by Taliban gunmen in the Khyber Pakhtunkhwa province on Saturday. Pictured: Pakistani security officials stand guard at a roadside checkpoint in Karachi 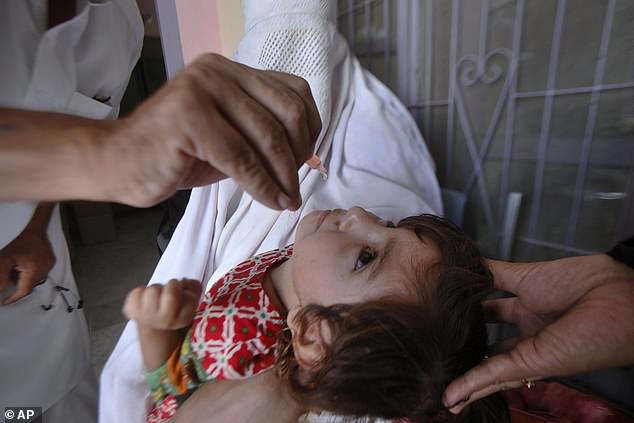 The terror group struck on the second day of a five-day anti-polio drive in a bid to vaccinate more than 6million children. Pictured: A healthworker gives a polio vaccine to a child in Peshawar, Pakistan

Police officer Sajjad Ahmed said two gunmen on a motorbike opened fire on the police team escorting the polio vaccinators in the Chaddarah area, killing one constable on the spot and critically wounding a Frontier Constabulary officer.

Members of the vaccination team were unhurt.

Pakistani militants often target polio teams and police assigned to protect them, claiming the vaccination campaigns are a Western conspiracy to sterilise children.

It was the first attack since the TTP on Friday announced the end of a one-month ceasefire with the government.

The truce had been announced in November amid peace talks between the two sides.

The attack took place in the district of Tank in Khyber Pakhtunkhwa province on the second day of a five-day anti-polio drive to vaccinate 6.5 million children, said Aimal Khan, speaking for the vaccination campaign. 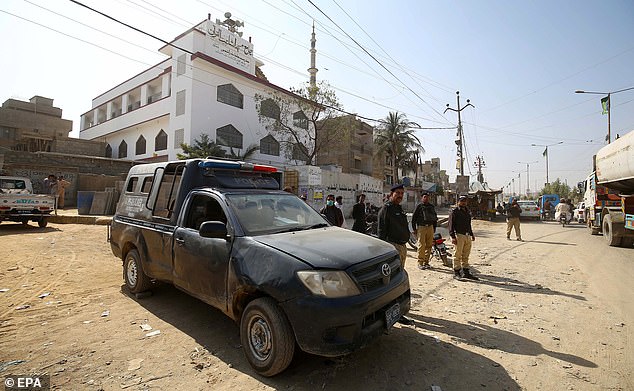 Pakistan and neighbouring Afghanistan are the only two remaining countries in the world where polio is endemic, after Nigeria was last year declared free of the virus.

Vaccine hesitancy remains high in the country, partly due to a botched CIA plan to oust Osama Bin-Laden in the early 2010s, according to Warwick University researchers.

The study, released in May, claimed the 2011 operation led to a decline in overall vaccine rates by up to 40 per cent the following year.

The CIA’s ruse saw free hepatitis B vaccines offered to children living near a compound in Abbottabad, where US intelligence had placed the former Al Qaeda leader.

A local doctor was recruited to make the programme look authentic — but the real goal was to try to confirm that Bin Laden was hiding in the region by obtaining a DNA match.

The CIA already had DNA from Bin Laden’s sister, who died in 2010, and were hopeful of getting a sample to compare it with from any of the terror chief’s children.

News of the plot emerged shortly after a US military special operations unit killed Bin Laden on May 2, 2011. It was seized upon by the Taliban and used to fuel conspiracy theories discrediting official public health programmes.