Home » World News » Taylor Swift announces new album during historic VMAs speech: 'I thought it might be a fun moment to tell you…'

Taylor Swift announces new album during historic VMAs speech: 'I thought it might be a fun moment to tell you…' 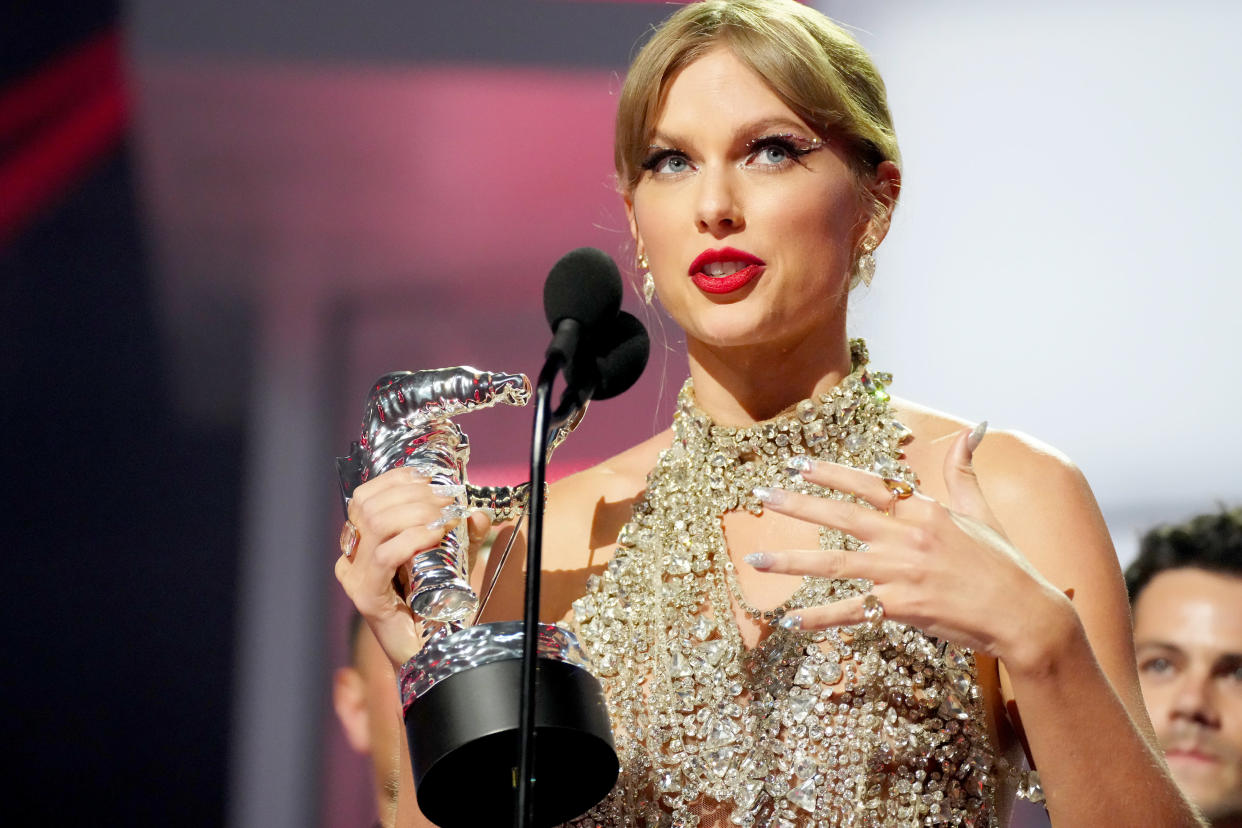 Sunday was a big night for Taylor Swift at the 2022 MTV Video Music Awards, when she became the first artist ever to win the ceremony’s biggest prize, Video of the Year, three times. She also made the biggest headlines on Sunday, with her surprise onstage announcement that a new Taylor Swift album is on the way.

“All Too Well,” which clocks in at 10 minutes, also won for Best Longform Video and Best Direction. (This was Swift’s second Best Direction award, following her win in the category for 2020’s “The Man.”) In her 2022 Video of the Year acceptance speech, Swift noted that she was “heartened by the fact that, for the first time in VMA history, four of the directors nominated in the Video of the Year category are women.”

The 10-minute “All Too Well” is from Swift’s re-recorded “Taylor’s Version” edition of her 2012 album Red, but along with remaking her back catalog — a long-term project she launched after Scooter Braun bought and sold the rights to her master recordings — Swift is still focusing on new music, of course. So, as the VMAs came to a close Sunday, she wrapped her speech by teasing, “I had sort of made up my mind that, if you were going to be this generous and give us this, I thought it might be a fun moment to tell you that my brand-new album comes out Oct. 21. And I will tell you more at midnight…”

An hour later, Swift excitingly announced the arrival of her 10th studio album, Midnights. Describing the record as “the stories of 13 sleepless nights scattered throughout my life,” she tweeted: “We lie awake in love and in fear, in turmoil and in tears. We stare at walls and drink until they speak back. We twist in our self-made cages and pray that we aren’t — right this minute — about to make some fateful life-altering mistake. This is a collection of music written in the middle of the night, a journey through terrors and sweet dreams. The floors we pace and the demons we face. For all of us who have tossed and turned and decided to keep the lanterns lit and go search — hoping that just maybe, when the clock strikes twelve … we’ll meet ourselves.”

Midnights will be Swift’s first full-length release since her Grammy-winning 2020 pandemic album Folklore and its companion record, Evermore. Her only other new original music in 2021 has been “Carolina,” which she wrote for the movie “Where the Crawdads Sing.” If that single receives an Academy Award nomination for Best Song next year, Swift may end up being a double-nominee and make awards show history yet again: “All Too Well: The Short Film” has reportedly qualified to be eligible for the Oscars’ Best Live Action Short category, according to The Hollywood Reporter.

Midnights, the stories of 13 sleepless nights scattered throughout my life, will be out October 21. Meet me at midnight.