Five-year-old Thai twins were married to fulfill a superstitious Buddhist belief that they were lovers in a past life.

Washirawit Bee Moosika and his sister Rinrada Breem had the wedding ceremony at home in Nakhon Si Thammarat, Thailand on March 4.

Their parents, Weerasak, 31, and wife Rewadee, 30, follow Buddhist teachings which claim that all twins are born together because they have ‘karma’ from a past life in which they were lovers whose relationship ended before they could wed.

They believe that unless twins are married at the earliest chance, their lives will be haunted with bad luck lingering from previous incarnations. 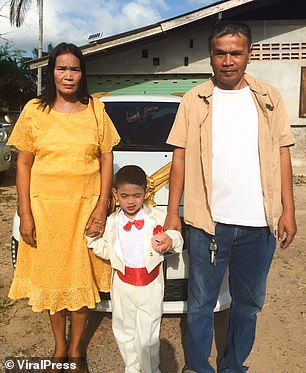 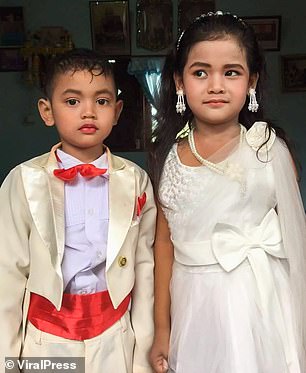 Weerasak and his wife Rewadee invited friends and relatives to witness their son and daughter’s marriage.

Proud mum Rewadee said: ‘I feel so lucky to have twins but I’m concerned that there is something following them from their previous lives. Our belief is that they should be married in order to clear that karma.’

The twins’ colourful wedding ceremony followed a traditional Thai wedding with parades, dancing, and offering of dowries from close relatives.

A Buddhist monk was also present to chant blessings during the toddlers’ unusual union.

After the ceremony, the parents, twins, and their guests had a dancing party while festive music played in the background.

Their father, Weerasak, said they had no choice but to marry off their children as Thai superstitious beliefs suggest that one of the twins will become sick unless they get married.

He said: ‘We believe that if your children were born twins who have a different gender, they must be married or else one of them will fall ill later in their lives.’

Weerasak added that their twins were lovers in their previous lives so they need to fulfil their marriage wish so that their children grows up healthy.

However, the twin’s marriage was not legally valid and was only done for ceremonial purposes.

The father added: ‘We are only doing this to make sure our children are safe. We do not want them to be sick and there is nothing to lose if we follow this belief.’