The government was absolutely right to ruin my holiday says Shapps

The government was absolutely right to ruin my holiday: Grants Shapps defends sudden Spain quarantine change as he returns home and goes into 14-day isolation warning other countries could follow

Transport Secretary Grant Shapps arrived home from Spain today and into two weeks of quarantine – and said the Government had been right to ruin his family holiday.

The minister was scuppered by his own department’s decision at the weekend to subject arrivals from the popular tourist destination to 14-days’ self-isolation after a surge in coronavirus cases.

He and his wife and children left for Spain after the Commons rose for its summer break last week.

But amid fury at the speed that quarantine had been reimposed on Saturday – at five hours-notice –  and concerns that he would be unavailable for a month, he agreed to leave them there and return to his constituency home in Hertfordshire.

Speaking to reporters after arriving today he defended the decision which ruined his own break – and said he could not rule out the Spanish quarantine being extended to other countries currently clear for people to visit.

‘I very much understand, obviously it had an impact on me and my family and I’m very very sorry and upset for the thousands of Brits who are either away or perhaps even hadn’t even managed to go away this summer as well to Spain,’ he said.

‘But it was absolutely essential we acted when we did, it is why all four nations of the United Kingdom acted together and the figures since have turned out to justify that action.’ 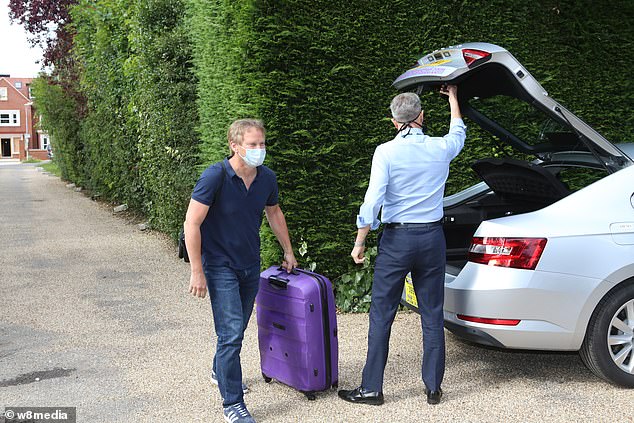 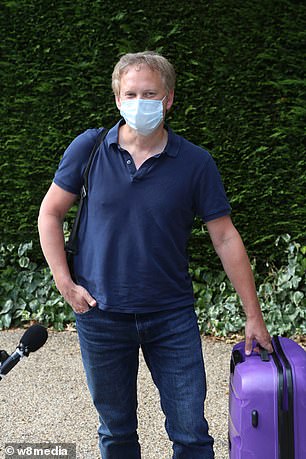 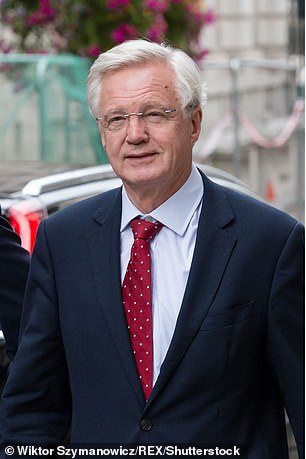 David Davis (right) questioned the approach, backing the head of Heathrow airport who suggested testing at the border, but Mr Shapps (left, today) said ‘it was absolutely essential we acted when we did’.

It came as ministers faced growing concern on the backbenches about the quarantine, after warning there was no  ‘viable alternative’ for travellers returning from high risk countries.

Boris Johnson is believed to be worried that a second spike in infections in the UK could start within a fortnight after he expressed concerns about a surge in cases across Europe.

But former minister David Davis questioned the approach, backing the head of Heathrow airport who suggested testing at the border instead, to avoid a catastrophe for the holiday industry.

Mr Davis tweeted: ‘Heathrow boss is right to call for airport testing to replace hard quarantines. Vienna has been doing this for months. I don’t understand why we haven’t.’

When it was pointed out that the tests were not totally reliable, especially if people picked up the virus on the flight, he added:  ‘On a 14 day holiday there is an 80 per cent chance someone infected will manifest symptoms at the airport.

‘If this is the case everyone on the plane should be quarantined. US companies like Cepheid can turn around a test in 30 minutes.

‘Nothing is perfect, you are as likely to catch the virus on the London underground back home as you are on the plane or on holiday.’ 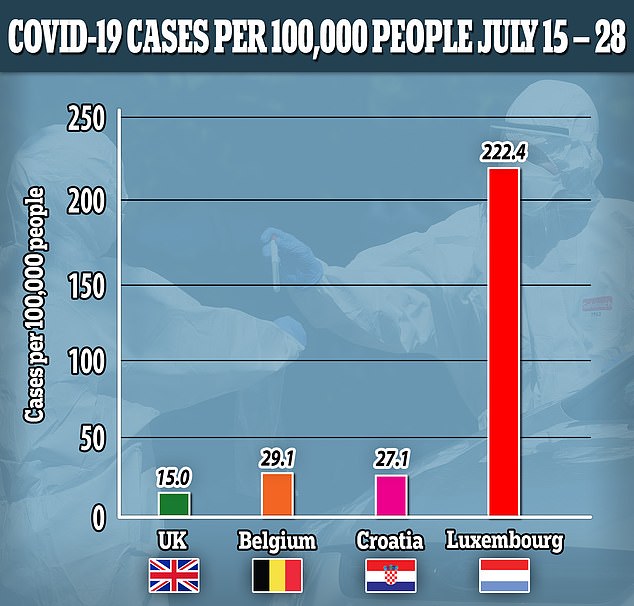 Belgium and Luxembourg could be removed from the safe travel list as early as tomorrow and Croatia could also be at risk. Luxembourg has the highest incidence of coronavirus cases per 100,000 people in Europe

The Government announced on Saturday it was banning all non-essential travel to Spain, with tourists returning to Britain having to self-isolate for two weeks, sparking a major diplomatic row with Madrid.

It is now thought that Belgium and Luxembourg could also be removed from the safe travel list as early as tomorrow because of growing outbreaks.

Meanwhile, ministers are said to be closely monitoring the situation in Croatia but a crackdown on that country is not expected to be imminent, according to The Times.

Mr Johnson has insisted the UK must reserve the right to impose travel restrictions at short notice in order to prevent a domestic increase in coronavirus.

But the travel industry is urging the Government to slash the 14 day quarantine period in order to make foreign travel more feasible amid such uncertainty, with John Holland-Kaye, the chief executive of Heathrow Airport, suggesting testing at the border could be the answer.

Culture Secretary Oliver Dowden today poured cold water on the plan as he said at the moment there is not a ‘viable alternative’ to the fortnight in self-isolation.

He said: ‘The challenge we have here is that it’s not the case you can simply test somebody and be sure that they don’t have the disease.’

He added: ‘It can incubate over a period of time, so there’s not a silver bullet of just testing immediately at the border.’ 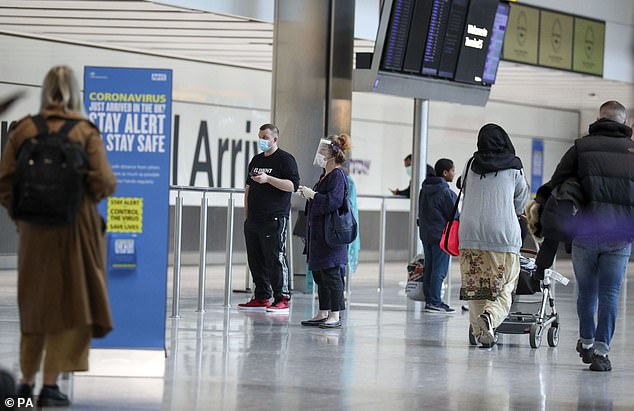 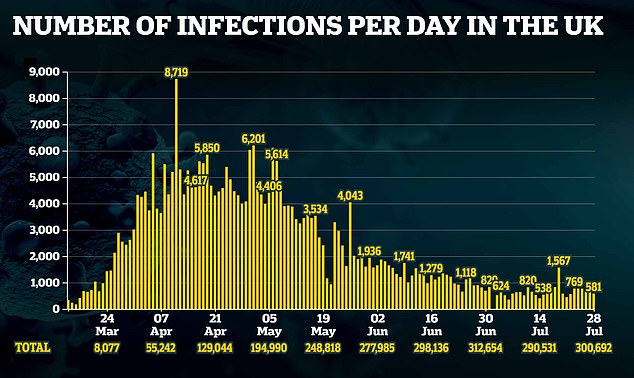 Mr Johnson yesterday warned there are ‘signs of a second wave’ of coronavirus in Europe as he defended the UK’s decision to reimpose quarantine travel rules on Spain.

A senior Government source said the PM was ‘extremely concerned’ by outbreaks ‘bubbling up’, both at home and abroad.

However, the decision to reimpose quarantine on Spain and the threat of the Government doing the same on other European countries is wreaking havoc with the travel industry.

The Government is under growing pressure to reduce the 14 day quarantine period and Mr Johnson has said that ministers are looking at ways to try to mitigate the impact of quarantine.

He said he believed a testing regime, which would see people tested when they land and then tested again a few days later, could be ‘up and running’ within a fortnight.

Mr Holland Kaye told the Telegraph he believed ministers are ‘very keen’ on a trial at airports.

‘We need to find a way of getting ‘red countries’ opened up again,’ he said. ‘Testing is the only viable way of doing that in the absence of a vaccine.

‘A lot of countries which are ‘red-listed’ have millions of people who don’t have the disease and can’t travel. That’s holding back economic recovery.’

Mr Dowden said he understood the travel industry’s ‘frustration’ with the current quarantine system but that currently there is no ‘viable alternative’.

He told BBC Radio 4’s Today programme: ‘I have heard [Mr Holland-Kaye’s] comments and I do understand his frustration and his desire for us not to impose quarantine.

‘If we could avoid imposing quarantine in a way that it was safe to do so then of course we would do that, that is why we keep it under review.’

He added: ‘Of course, we continue to look at all alternatives but we are not at the point where there is a viable alternative to the 14 day quarantine.

‘Indeed, in your question you alluded to the fact that testing even after a week does not catch every one.’

Mr Dowden said that people ‘should continue to book holidays’ but they needed to be ‘aware of that risk’ of quarantine being imposed.

Government advisers have warned it can take a number of days from the moment of infection before tests return a positive result, meaning testing negative on arrival does not mean the passenger will not develop symptoms later on.

But Public Health England and the Department of Health and Social Care are understood to have spoken with travel assistance company Collinson to understand the proposed testing pilot it is developing with Heathrow.

Preliminary modelling from the London School of Hygiene and Tropical Medicine suggested 94 per cent of cases would be detected if the quarantine period was cut to eight days and passengers tested negative on the seventh.

Amid criticism from Spain for including lower risk regions in the quarantine restrictions, transport minister Baroness Vere of Norbiton said ways to impose more targeted restrictions were being examined.

‘For the time being, we are taking the approach by country for border measures, but it is the case that it could be that we put them in place for regions in the future,’ she told the House of Lords.

Earlier yesterday Mr Johnson insisted the Government would not hesitate to act if flare-ups of coronavirus occurred in other destinations.

‘I’m afraid you are starting to see in some places the signs of a second wave of the pandemic,’ he warned.

Spain’s Prime Minister Pedro Sanchez has described the restrictions on travel to the country as an ‘error’. 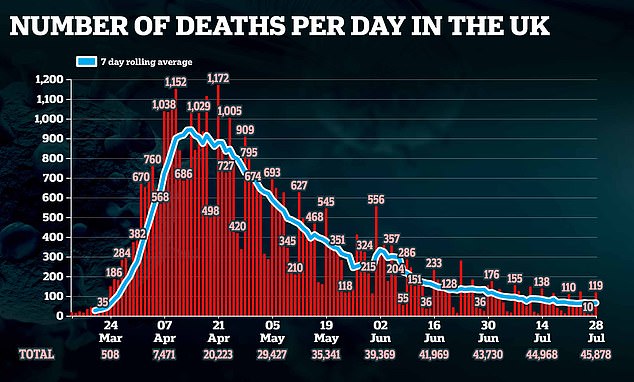 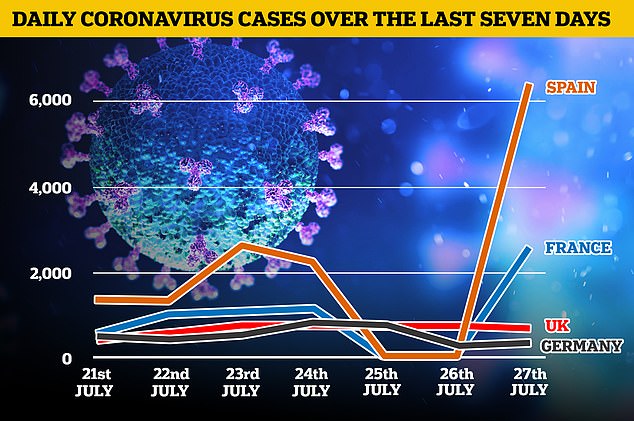 The most up to date figures show the number of new cases is rocketing upwards in Spain. It announced 6,361 new cases over the weekend, up from 4,581 the previous weekend. France announced 2,551 new coronavirus cases on Monday

He pointed out that the upsurge in coronavirus cases is focused in two regions, Catalonia and Aragon, adding: ‘In most of Spain, the incidence is very much inferior to even the numbers registered in the United Kingdom.’

Madrid had been urging the UK to exclude the Canaries and Balearics – which include popular tourist resorts on Ibiza, Majorca and Menorca – from its quarantine requirements.

But instead, official travel advice was tightened to bring the islands in line with the Spanish mainland.

Britons make up over a fifth of foreign visitors to Spain, which relies heavily on tourism, and Madrid has said the UK Government gave it no warning that the quarantine move was coming over the weekend.

Labour accused ministers of a ‘chaotic’ response and called for a flexible approach for struggling businesses to ensure that public health measures such as the change in quarantine rules for people returning from Spain do not lead to mass job losses.