As the world mourns Queen Elizabeth II, who died Thursday at 96, one of her many appearances in pop culture in recent years that stands out is the opening ceremony of the 2012 Summer Olympics in London. At the beginning of the broadcast, a three-minute film played of Her Majesty and the iconic James Bond, played then by Daniel Craig, meeting up at the palace before simultaneously parachuting into the Olympic stadium.

The project, helmed by Oscar-winning director Danny Boyle, is something that she kept secret from even her fellow royals, according to an episode of BBC Radio 4’s The Reunion that commemorated the 10th anniversary of the moment.

“The queen never told her family she was doing it,” production stage manager Sam Hunter said. “That was one of the stipulations, that she agreed to be part of it. So, if you actually see when she comes and she takes her seat, you can see her family go, ‘Ah, nice one.'”

Stephen Daldry, who was working as an executive producer of the event, said the production team had to keep the queen’s cameo under wraps from even some of then Prime Minister David Cameron’s cabinet. Some of those people regularly communicated with Buckingham Palace, so if they knew, the secret could be blown.

Their discretion paid off when the sketch aired to an audience of more than one billion people.

While the actual jump, of course, was performed by body doubles, the camaraderie the queen and Craig came to share was real.

“I, like so many, was deeply saddened by the news today and my thoughts are with The Royal Family, those she loved and all those who loved her,” Craig tells Yahoo Entertainment following her death. “She leaves an incomparable legacy and will be profoundly missed.”

Craig and the queen were also photographed together in 2006, at the premiere of Craig’s first outing as 007, Casino Royale. 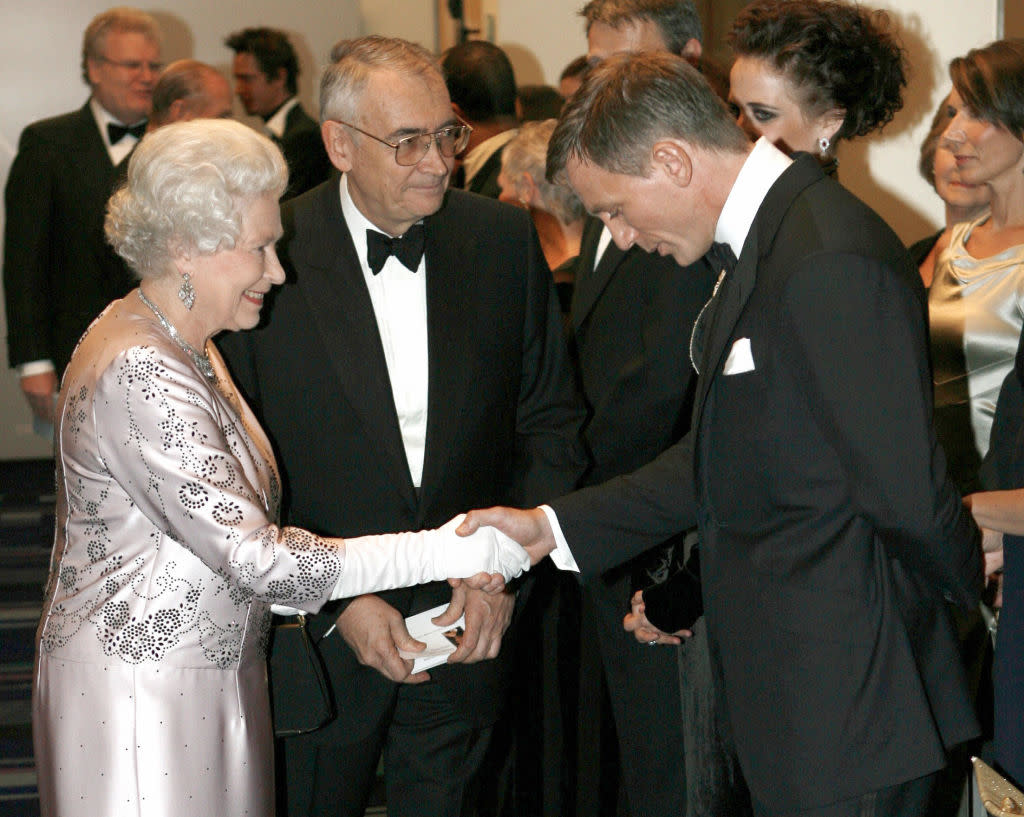 She formally recognized the actor in December, after he’d announced his departure from the franchise, on her annual New Year’s honor list. Craig was named a Companion in the Order of St Michael and St George for his outstanding contribution to film; Bond himself had earned the honor on film for his work as a spy.

In February, Craig revealed just a smidgen of what the queen was like in private during an appearance on The Late Show With Stephen Colbert. He said that she was “very funny, very funny,” and liked to crack jokes about him.

“We were having our photograph taken,” he said of the ceremony, “and she just went, ‘Oh no, he’s the one that doesn’t smile.'”

Craig complimented the queen’s beloved corgis, who were by her side in the film until she took to the air.

“I was rolling around on the floor with them most of the time. I mean, they’re just there. I think they have their own footmen,” Craig said. “And yes, they’re very friendly.”