Thousands of students are rallying in Melbourne as part of nationwide protests demanding climate action from the federal government.

An estimated crowd of 5000 people gathered at Treasury Gardens on Friday for a rally and march organised by School Strike 4 Climate in response to this month’s federal budget. 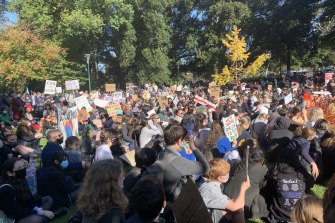 Thousands of students gather for a climate protest at Melbourne’s Treasury Gardens on Friday afternoon.Credit:Anna Prytz

“We are here to tell the government to stop funnelling money into dirty energy,” 16-year-old organiser Anj Sharma told the crowd to huge cheers.

“The earth is getting hotter than my imaginary boyfriend,” one sign written by students from Camberwell Girls Grammar School read.

One student from the school, Charli Lincke, 16, took part in a walk-out on Friday morning to deliver a letter to Mr Frydenberg’s nearby office.

“We knew we needed to make a big statement, especially with us being in Josh Frydenberg’s electorate, we needed to let him know we’re really disappointed in his decision to fund gas,” she said.

“We need to take big action and make big waves so the government listens to us.

Charli said her school had been supportive of the striking students.

“They understand the importance of building women who fight for their future,” she said.

“We support and admire their courage and dedication, and we share their deep concerns,” the statement said.

“Australia’s lack of meaningful action on climate change is a lost opportunity and has become an international embarrassment. Worse, it is a reckless and irresponsible betrayal of future generations.

“Our three unions represent nearly 300,000 education workers across Australia who care deeply about the future of their students.”