Paris: One of Europe’s most senior leaders has reminded Prime Minister Scott Morrison of the need for “transparency and loyalty” during an awkward encounter in New York, as more countries openly criticise the new AUKUS defence pact.

European Council President Charles Michel issued the rare rebuke during a meeting with Morrison on the sidelines of a United Nations conference. 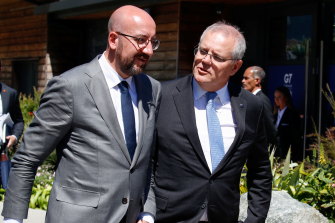 In comments that confirm anger over the AUKUS announcement has expanded far beyond France, German Foreign Minister Heiko Maas also described the agreement between Australia, the United States and United Kingdom as “unsettling”.

The partnership has enraged Paris because it triggered the termination of a $90 billion contract for the French to design and part-build 12 new submarines for the Australian Defence Force.

The US and UK instead will help Australia build eight nuclear-powered submarines.

Europe has shown solidarity with France and is contemplating whether to suspend talks for a free trade deal with Canberra. Much of the European anger stems from the AUKUS agreement being negotiated in secret all year even though the US and UK are key members of NATO.

Video of the exchange with Michel shows Morrison warmly greeting the European Council President before saying the European Union was an important ally in the Indo-Pacific. The Prime Minister then foreshadowed talks about how the bloc could do more for the region’s security.

Michel replied: “Well thank you for your message, but as you know for us transparency and loyalty are fundamental principles in order to build stronger partnerships and stronger alliances.”

Morrison was heard thanking Michel before cameras were told to leave the room.

Michel later tweeted that he had a “frank, direct and lively exchange” with Morrison about AUKUS.

“Clarity is needed between friends. Dialogue is key to build strong partnerships. We will stay in close contact,” he said.

Morrison’s office said the Prime Minister had an open and constructive discussion with Michel.

“It was an important opportunity to further explain the purposes of AUKUS, Australia’s sovereign decision on the submarine contract with Naval Group and the circumstances surrounding it.” Morrison also said he hoped the free trade deal negotiations could continue.

Outside the United Nations, Maas, the German Foreign Minister, said he could “understand the anger of our French friends”.

“What was decided and the way in which this decision was made is unsettling, and it is sobering – not just for France.”

At a separate event, the European Union’s internal market commissioner Thierry Breton called for a “pause and reset” in the bloc’s relationship with the US.

“It is true that some see this in Europe as a wake-up call for Europe,” Breton told an Atlantic Council virtual event.

“Something has changed. There is indeed a growing feeling in Europe – and I saw this with great regret – that something is broken in our transatlantic relations.

French President Emmanuel Macron is yet to publicly comment on the axed submarine contract but is furious with Morrison and US President Joe Biden.

Biden and Macron are scheduled to speak over the phone later this week.

The Morrison government has argued the growing threat from China meant the diesel-powered submarines it had ordered from France in 2016 would not meet Australia’s changing needs.

Morrison told reporters in New York on Monday it would have been naive not to expect France to react angrily over the contract’s cancellation.

“We understand that, we totally acknowledge that and we knew that would be the case,” he said.

“And it was not possible for us to be able to discuss such secure issues in relation to our dealings with other countries at the time.”