Home » World News » Traditionally a day for the faithful, on this Sunday Daniel Andrews prays for time Timing might be everything for a politician with a critical announcement to make.

But the novel coronavirus doesn’t care a fig about timing, consigning a clearly exasperated Daniel Andrews and his state to an extended period of pain, fear and loathing. 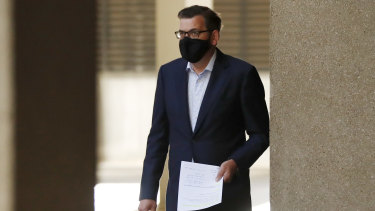 No changes: Victorian Premier Daniel Andrews was unable to announce an easing of restrictions on Sunday.Credit:Getty

The new uncertainty caused by the sudden outbreak in virus infections in Melbourne’s northern suburbs over the past two days comes at the most consequential moment imaginable.

Melbourne’s thousands of businesses and millions of jobs rely on end-of-year, pre-Christmas trade. Christmas is just two months away. For many businesses – perhaps most – ruin or survival is now a difference in days before they can resume trading.

The hope that those crucial days might be brought forward has now all but evaporated.

Andrews, who has placed himself at the centre of Victorian’s entire COVID-19 saga – and thus, has made himself a target for disaffection – knows his fortunes are stretched thin.

His media statement on Sunday made it clear: "We are so close – so close – to beating this thing. I’m asking each of you: keep going. Dig deep. Stay strong."

It was a pleading, following a weekend of careful telegraphing that bad news was likely.

But the virus is withholding the mercy of time to Andrews, causing a growing number of Victorians, who have already displayed astonishing forbearance through the long winter and into the spring, to grow more than agitated.

The weekend’s The Age/Ipsos poll revealed that Andrews and his administration still had a store of support for most of the state’s lockdown restrictions, though patience with the continuing closure of restaurants and retail stores was clearly running short.

But that poll reflected the feelings of Victorians at a time when expectation was high that Premier Andrews would announce a significant easing of restrictions on Sunday.

He signalled only a week ago, on Sunday, October 18, that good news could be brought forward if the rate of new infections continued falling.

The numbers played along for most of the week. Restaurateurs stocked up and called in staff.

Now, as Premier Andrews declares, everything relies on the result of tests sitting in laboratories and yet to be taken. He needed to know there was "no bushfire burning out there".

Sunday is traditionally a day for the faithful.

Andrews can only pray now that there are enough of his faithful still believing in his cautious approach to grant him those few more days, and that the virus doesn’t have an altogether different timetable.

a, Day, Fa, For, the, Traditionally
World News