Tuition fees in England are among the highest in the world

Students in England face among the highest tuition fees and debts in the developed world but also a decline in the value of their degrees, a damning report has revealed.

They are leaving university owing an average debt of £40,452 and will have lower lifetime earnings than many foreign graduates.

The Organisation for Economic Cooperation and Development (OECD) warned the country’s expansion of higher education ‘has come at the expense of quality at the margins’. 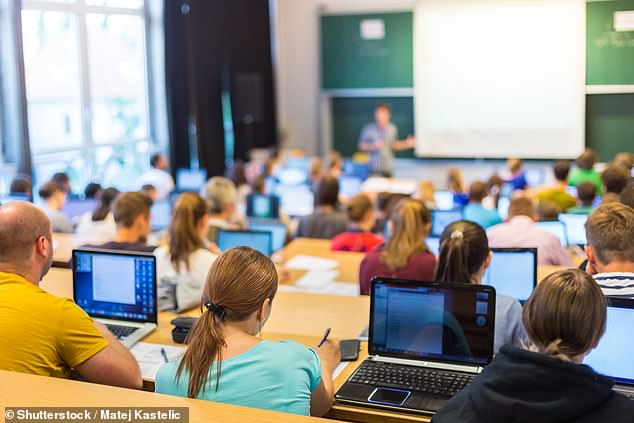 Students in England are leaving university owing an average debt of £40,452 and will have lower lifetime earnings than many foreign graduates (file image)

Andreas Schleicher, its director for education and skills, said employers were picking up on the ‘variability in the quality of degrees’ on offer.

This is reflected in a ‘declining wage premium’ – the difference in salaries between graduates and school leavers who did not go to university.

Mr Schleicher called on the Government to clamp down on poor quality degree courses and institutions to ensure students were given ‘value for money’.

Some young people may also ‘be badly advised to go to university and they would have been better off choosing a kind of technical or vocational programme,’ he said.

The annual Education At A Glance report examined 36 OECD nations and economies, plus ten partner countries.

England has the second highest tuition fees out of all OECD countries – after the US – at £9,250 a year. Among 11 countries, students in England also have the highest debt level.

The ‘private net financial returns’ – the difference between the cost of university and the financial benefits – are also lower than in most developed countries.

The average employment rate for graduates in the UK is five percentage points higher than for those who have not been to university, which the OECD said was a ‘relatively low’ employment advantage.

Only five other countries had a lower employment advantage for those going to university.

Dr Mary Bousted, of the National Education Union, said: ‘England has among the highest university tuition fees across the OECD and our students are graduating with enormous debt burdens.

‘This puts further and higher education out of the reach of many young people.’

While Jo Grady, from the University and College Union, added: ‘Students are leaving university with world record levels of debts – yet their universities are not investing in staff.

Students have made it clear that they want to see more money prioritised for teaching and, as a minimum, we should be matching the level of investment made by other countries.’

A Department for Education spokesman said: ‘We want students on high-quality courses, to give them the best chance of a successful career, which is why the department recently called on institutions to drop or revamp courses which are delivering poor value for money.

‘We expect university access and participation plans to include ambitious actions that set out how they will improve equality of opportunity for students from all backgrounds to succeed in and progress from higher education.’