With Union flags on show as the PM spoke by video link, he channelled Winston Churchill urging the country to keep resisting the Russian invaders.

Mr Johnson is also announcing a new £300million package of military support as he underlines the UK’s backing for Volodymyr Zelensky and his brave fighters.

In another symbolic move, the British ambassador Melinda Simmons – who only recently returned to Kyiv – was present in person to hear the address.

Ms Simmons tweeted a photo of the scene saying it was ‘a huge privilege’ to be at the session, although she later deleted it. 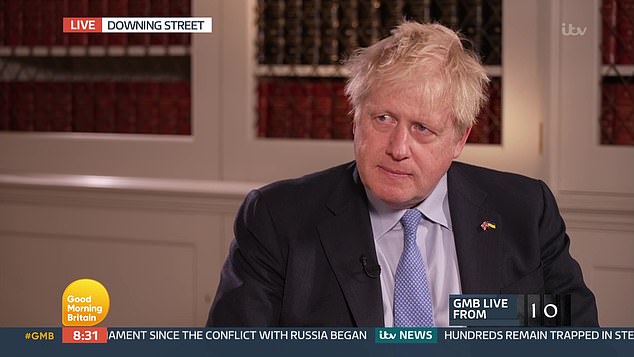 The speech was not shown live due to security concerns, but pre-briefed extracts showed Mr Johnson was telling politicians the UK is ‘proud to be among Ukraine’s friends’ after reopening the British embassy in Kyiv last week.

In his address to the parliament – known as the Verkhovna Rada – the PM echoed the words of Churchill to the British people during the Second World War.

Mr Johnson said: ‘When my country faced the threat of invasion during the Second World War, our Parliament, like yours, continued to meet throughout the conflict, and the British people showed such unity and resolve that we remember our time of greatest peril as our finest hour.

‘This is Ukraine’s finest hour, an epic chapter in your national story that will be remembered and recounted for generations to come.

‘Your children and grandchildren will say that Ukrainians taught the world that the brute force of an aggressor counts for nothing against the moral force of a people determined to be free.’

Mr Johnson regards Sir Winston as his political hero and wrote a biography of the wartime leader’s life called The Churchill Factor.

The new military support will include electronic warfare and GPS-jamming equipment, a counter-battery radar system and thousands of night vision devices. 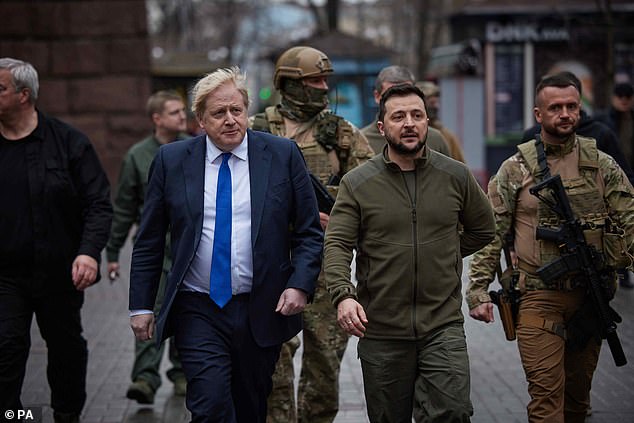 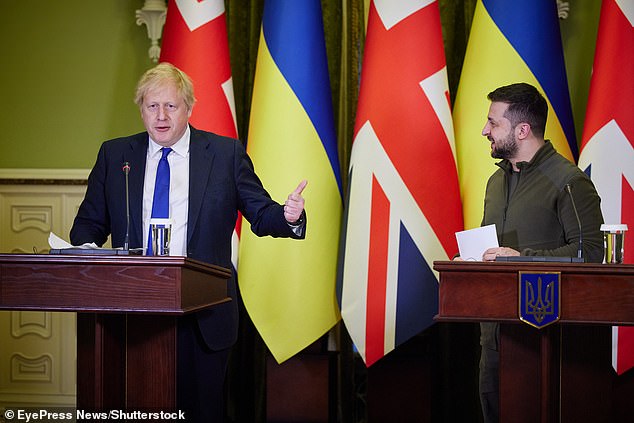 Downing Street said it would also send more than a dozen new specialised Toyota Land Cruisers to protect civilian officials in eastern Ukraine and to evacuate civilians from frontline areas.

Mr Johnson visited Kyiv last month to meet Mr Zelensky after a pledge to give £100million worth of weapons to Ukraine.

The key Ukrainian city of Odesa is planning to honour him by naming a street or square after him.

During Mr Zelensky’s address to the Commons in March, he told MPs: ‘I would like to remind you the words that the United Kingdom have already heard, which are important again. We will not give up and we will not lose. We will fight until the end, at sea, in the air. We will continue fighting for our land, whatever the cost. We will fight in the forests, in the fields, on the shores, in the streets.’

Thanking ‘civilised countries’ for their support, he said: ‘I’m very grateful to you Boris… Please make sure you do what needs to be done and what is stipulated by the greatness of your country. Glory to Ukraine and glory to the UK.’

Britain is at the forefront of the West’s response to Russia’s invasion and has sent more than £450million in military aid to the Ukrainian army, including thousands of missiles.

The British embassy in Kyiv recently reopened more than two months after it was moved due to fighting.

The US said yesterday it hoped its diplomats would be able to return ‘by the end of the month’, while Sweden will reopen its embassy tomorrow.

Washington closed its embassy in Kyiv and moved its diplomats on February 14, ten days before Vladimir Putin’s invasion.

Russia is continuing its assault on the industrial Donbas region, attempting to advance in the south and east after failing to capture the capital.

Mr Zelensky has accused Russia of trying to ’empty’ the region of people, saying peace talks are in danger of collapsing.

The death toll of civilians in Ukraine has exceeded 3,000 as of yesterday, according to the UN’s human rights office.