Boy meets world: Ukraine’s foreign fighters ridicule American Boogaloo Boy who RAN AWAY when he realised he’d actually have to fight Russians in Kyiv with the kit he was given and complained he’d been lured into ‘trap’

Foreign fighters in Ukraine have ridiculed an American who fled the country when he was faced with fighting Russians in Kyiv with supplied gear, and complained in a viral video that he had been lured into a ‘trap’.

Henry Hoeft, 28, was among thousands of foreigners to answer the call of Ukraine’s President Volodymyr Zelensky to help repel Moscow’s invasion of his country – including a reported 3,000 U.S. citizens.

Hoeft, who also goes by the name of Henry Locke, is a 28-year-old former U.S. Army infantryman with associations with the American far-right group Boogaloo Boys.

A video of the Ohio native speaking to camera about his experiences trying to escape the country went viral on social media this week, with the army veteran admitting that he and two others fled the country in an ambulance.

He claimed that he and others in his unit were supplied with limited gear when asked to fight in Kyiv, something they refused to do.

But according to other foreign fighters, when the American attempted to join the Georgian National Legion – a unit of foreign fighters separate from Ukraine’s Foreign Legion – he was rejected for not meeting the necessary requirements.

They also disputed claims that he made about an alleged attack on a Georgian National Legion base, and his experiences trying to leave Ukraine. 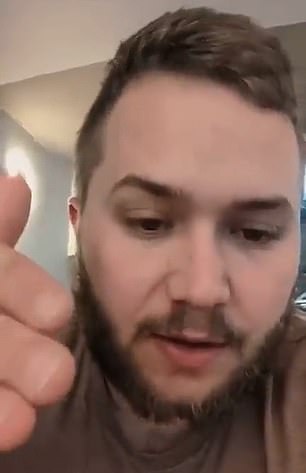 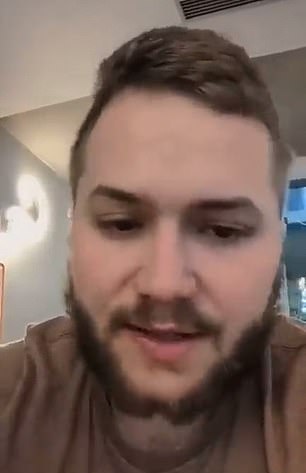 Henry Hoeft, 28, was among thousands of foreigners to answer the call of Ukraine’s President Volodymyr Zelensky to help repel Moscow’s invasion of his country – including a reported 3,000 U.S. citizens. A video (pictured) of Hoeft speaking to camera about his experiences trying to escape the country went viral on social media this week

In the expletive-ridden video, he claimed he was in a base that was attacked, resulting in the deaths of multiple foreign fighters.

He then said his unit was asked to go to Kyiv, the Ukrainian capital which has been bracing itself for a huge Russian assault.

His unit, he claims, refused to go. Instead he says, along with two others, he fled the country – by hiding in the back of an ambulance disguised as humanitarian workers.

They’re trying to send us to Kyiv with no f***ing weapons,’ he claimed. ‘No kit. No f***ing plates. The people who are lucky enough to get weapons are only getting magazine with like 10 f***ing rounds.

‘When they wanted to send us to Kyiv we said no – the whole group. Bunch of Americans, Canadians, British,’ he said in the video filmed in an unknown location.

‘So they told us we have to get the f*** out of there or they were going to shoot us in the back, alright. So me, this British guy and another American, we f***ing hid in the back of an Ambulance to get out.’

Hoeft claims that he had heard stories of foreign fighters being told by Ukrainian borders guards they could not leave without leaving their kit behind, or in some cases had their passports ripped up and were told to return to the front lines.

‘They’re pulling people out, cutting up passports, sending them back,’ he claimed, before saying that he and his comrades disguised themselves to escape.

‘So we dump out s**t, we got like – in like red cross vests and they had f***ing humanitarian passes to get us through the Ukrainian border,’ he told the camera. 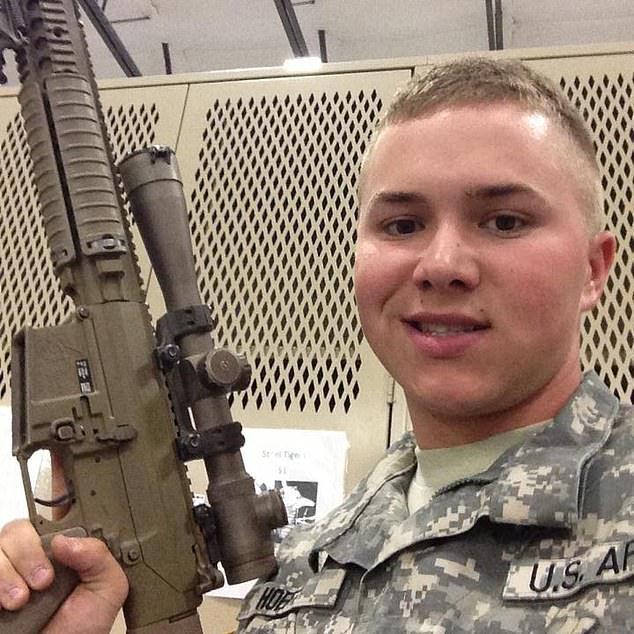 Hoeft (pictured), who also goes by the name of Henry Locke, is a 28-year-old former U.S. Army infantryman with associations with the American far-right group Boogaloo Boys 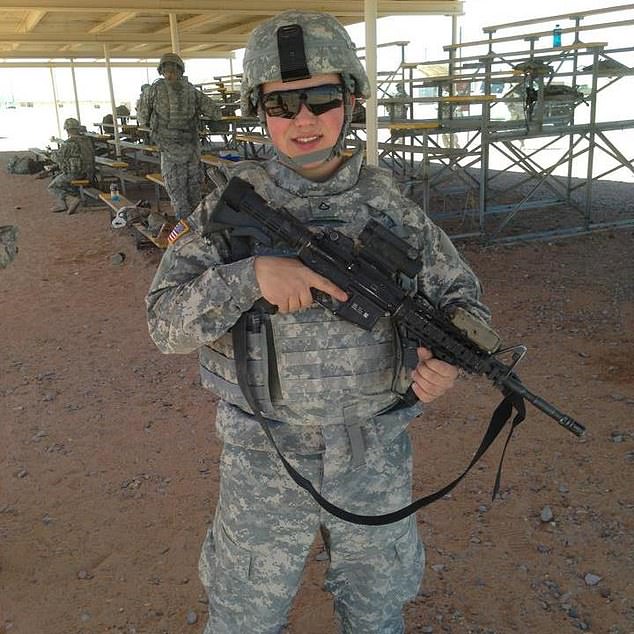 Hoeft, a resident of Frazeysburg in Ohio, has been recording his experiences in Ukraine on his TikTok channel, which has been deleted or banned since his posted his most recent video

He concluded his video by warning other potential foreign fighters not to come to Ukraine, claiming it was a ‘trap’.

‘People need to stop coming here. It’s a trap. And they’re not letting you f***ing leave. The best way to leave is […] in a car or something.

‘People who get out by vehicle have a better chance of hiding their f***ing kit in the back, doing whatever the f*** they can. But do not try to leave here on foot if you are a volunteer. It’s a mess. And it’s a trap. And I have multiple people who can confirm this story for me,’ he claimed.

However, since he posted the video, at least two other foreign fighters in Ukraine have recorded their own videos hitting back at his claims.

One member of the Geogian Legion, Harrison Josefowitz, posted a response to Hoeft’s claims, calling them ‘completely false’. He said Hoeft – and another individual – did pass the Legion’s vetting process.

‘This is in direct retaliation to them being rejected through our vetting process,’ he said of Hoeft’s claims. ‘And that is exactly why we have a vetting process – to stop those kind of mindset people from getting here. From helping us out.’

He also said that the Legion has had a number of people who have crossed the border, and have had no issue getting gear across the border into Poland. 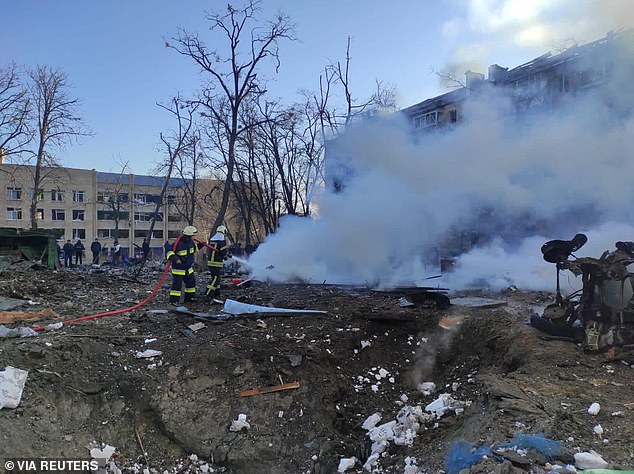 Rescuers work at the site damaged by shelling, as Russia’s attack on Ukraine continues, in Kyiv, Ukraine, in this handout picture released March 18, 2022

On the claim that the Legion’s base was hit, Josefowitz said: ‘Well I’m still here, and so are the multiple amounts of Brits that were there with us, and the Americans that were here with us.’ He added: ‘The base that was hit was 30 kilometres away.’

Another foreign fighter, who identified himself as ‘Mike’ and referring to Hoeft just as ‘Henry’, said he had seen no issues with foreign passports at the border.

Another video, posted before entering Ukraine, showed Mike with Hoeft and a British man – suggesting two pair are well acquainted.

According to the Columbus Dispatch, ‘Mike’ is Mike Dunn – the former leader of the Last Sons of Liberty, a faction of the Boogaloo Boys.

The far-right group gained notoriety in recent years by attending Black Lives Matter protests carrying weapons, such as AR-15 rifles. The Dispatch reported that Hoeft has distanced himself from the group when it ‘got all crazy’.

Hoeft, a resident of Frazeysburg in Ohio, has been recording his experiences in Ukraine on his TikTok channel, which has been deleted or banned since his posted his most recent video.

He claimed that when he first telegraphed his intention to go to Ukraine, he got a call from the FBI advising against it. 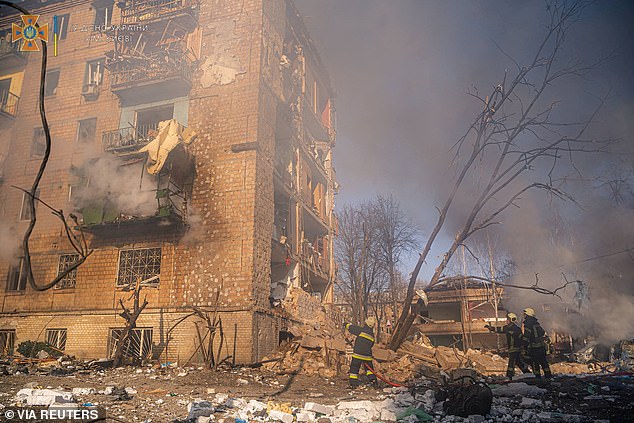 Rescuers work next to a residential building damaged by shelling, as Russia’s attack on Ukraine continues, in Kyiv, Ukraine, in this handout picture released March 18, 2022

‘He told me that I in no way have the support of the U.S. government when I’m over there, and if I get in any trouble, I need to just call the embassy,’ Hoeft said.

While it is not illegal, the U.S. government have advised citizens against going abroad to fight in Ukraine.

In a statement earlier this month, the U.S. statement department said: ‘Ukrainians have shown their courage and they are calling on every resource and lever they have to defend themselves. We applaud their bravery.

‘However, our Travel Advisory remains: U.S. citizens should not travel to Ukraine, and those in Ukraine should depart immediately if it is safe to do so using commercial or other privately available options for ground transportation.’

Russia has warned that foreign fighters will be considered mercenaries and ‘will not be afforded the rights given to lawful combatants according to international humanitarian law.’ They would face criminal charges, or worse, should they be captured in Ukraine, Russia has said.

‘We are urging all foreign citizens who may have plans to go and fight for Kyiv’s nationalist regime to think a dozen times before getting on the way.’