Fanned by ferocious gusts of up to 93 mph, a wildfire burning in Northern California grew to 30,000 acres on Sunday, putting more than 180,000 people under mandatory evacuation as thousands of firefighters battled against odds to save lives, homes and some of the most famous wineries in the world.

The Kincade Fire in Sonoma County was just 10% contained Sunday morning as extreme Diablo winds blew embers from the northeast to the southwest in the direction of Santa Rosa, a city of more than 175,000 people that was devastated by the October 2017 Tubbs Fire that caused $1.3 billion in damages and killed 22 people.

California Gov. Gavin Newsom on Sunday declared a statewide emergency “due to the effects of unprecedented high-wind events which have resulted in fires and evacuations across the state.” 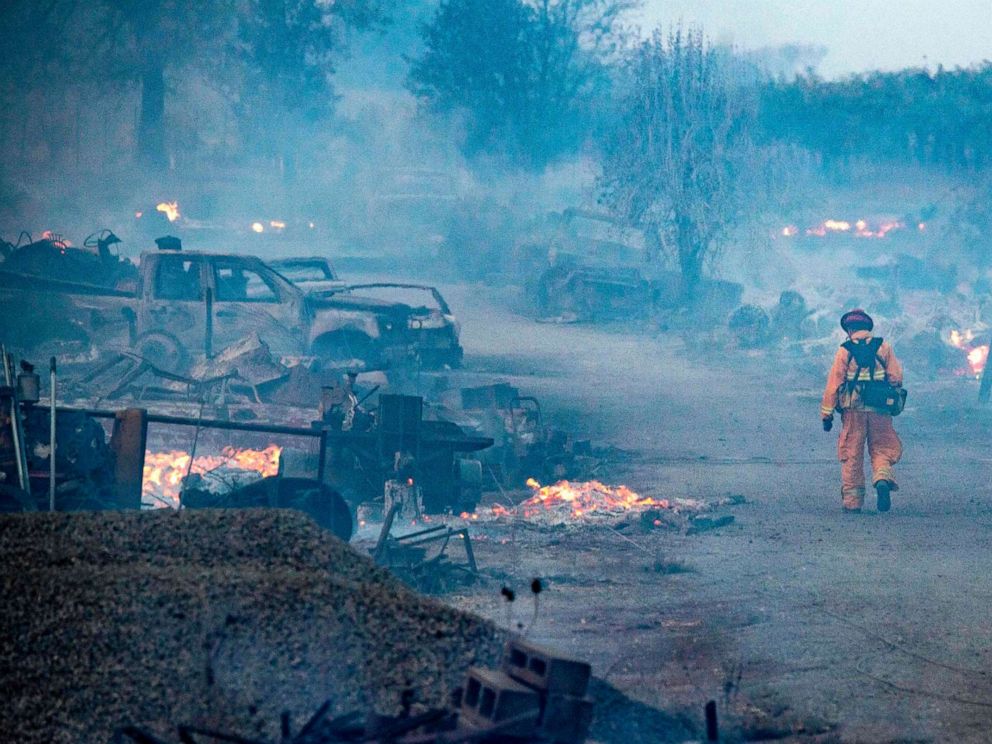 “We are deploying every resource available, and are coordinating with numerous agencies as we continue to respond to these fires. It is critical that people in evacuation zones heed the warnings from officials and first responders, and have the local and state resources they need as we fight these fires,” Newsom said in a statement.

Embers from the Kincade Fire were suspected of igniting a blaze Sunday morning in Vallejo, some 56 miles from the epicenter of the blaze in Sonoma County, and prompting the partial closure of Interstate 80. Two other spot fires were burning in Contra Costa County, one near Mount Diablo State Park in Contra Costa County about 100 miles south of the primary fire zone, and the other in Crockett, about a quarter-mile from a NuStar Energy facility that contains multiple crude oil tanks, officials said.

The conflagration in Sonoma county has destroyed at least 79 structures, many of those homes, according to the California Department of Forestry and Fire Protection (Cal Fire). No deaths have been reported.

Thousands of homes across Sonoma County were being threatened by embers that could land anywhere the wind blows. 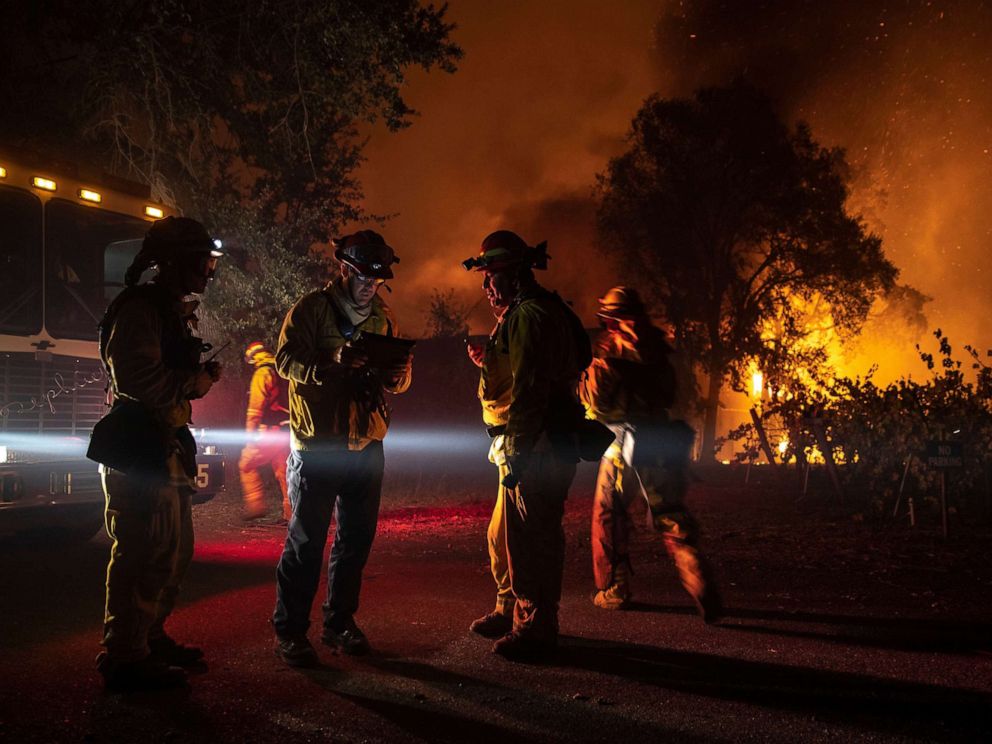 Early Sunday morning, embers from the Kincade Fire were suspected in a blaze that destroyed the historic Soda Rock Winery in the Sonoma County town of Healdsburg, about 70 miles north of San Francisco. The winery dates back to 1869.

“The challenge is with the high winds coming from the northeast. All the firefighters on the ground are trying to get ahead of it,” Robert Carvalho, a spokesman for Cal Fire, told ABC station KGO-TV in San Francisco while standing near the still-smoldering ruins of the Soda Rock Winery.

The Kincade Fire is named after John Kincade Road northeast of Geyserville, where Cal Fire officials say it broke out on Wednesday night. The cause of the blaze is under investigation.

Carvalho said about 3,000 firefighters were battling the Kincade Fire on the ground, while helicopters and firefighting jetliners were dumping fire retardant on the blaze from the air.

“They’re going around to structures in that area doing structure protection, prepping the homes and just making sure that there’s no one else in those home and everyone has been evacuated,” Carvalho said of Cal Fire ground crews.

About 90,000 people were evacuated in the Sonoma County towns of Windsor, Healdsburg, Calistoga, Geyserville, Graton, Guerneville, Jenner and Bodega Bay on Saturday night and evacuation orders were expanded on Sunday morning for about 90,000 more people, including residents of in a northern section of Santa Rosa. Two major hospitals in Santa Rosa were also evacuated.

Parts of Highway 101, a major freeway through Sonoma Country, was also closed on Sunday due to blowing embers and debris that made driving dangerous for motorists due to low visibility.

“Our town leadership has been evacuated twice from our command center,” Windsor Mayor Dominic Foppoli told KGO-TV on Sunday morning from a makeshift command post in Santa Rosa.

Foppoli said his town of 27,000 residents was completely evacuated on Saturday night.

“We executed the single largest evacuation in the history of our town … in about five hours,” Foppoli said. 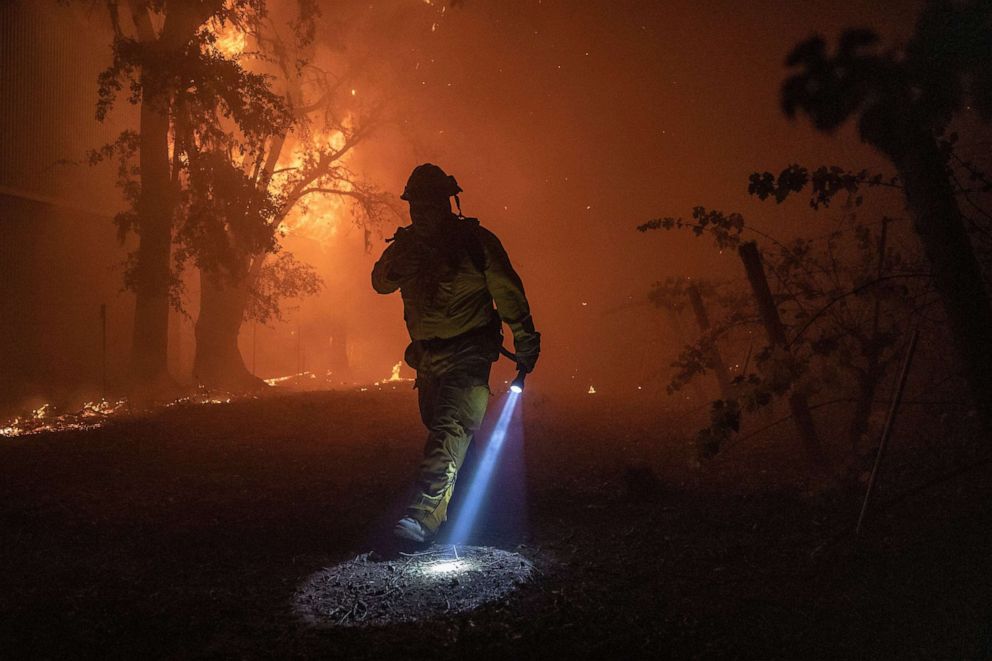 The National Weather Service recorded gusts of up to 93 mph near Healdsburg on Saturday night and said gusts throughout the county were clocked at 50 to 70 mph.

“It was the most fierce wind I have ever seen in the 30-plus years I’ve lived in our town,” Foppoli said. “So the concern, obviously, is that wind will bring the fire toward the city.”

Winds could gust up to 60 mph in parts of Northern California on Sunday and relative humidity could be as low as 8%, creating extremely critical fire weather and any blaze, new or existing, could grow erratically. 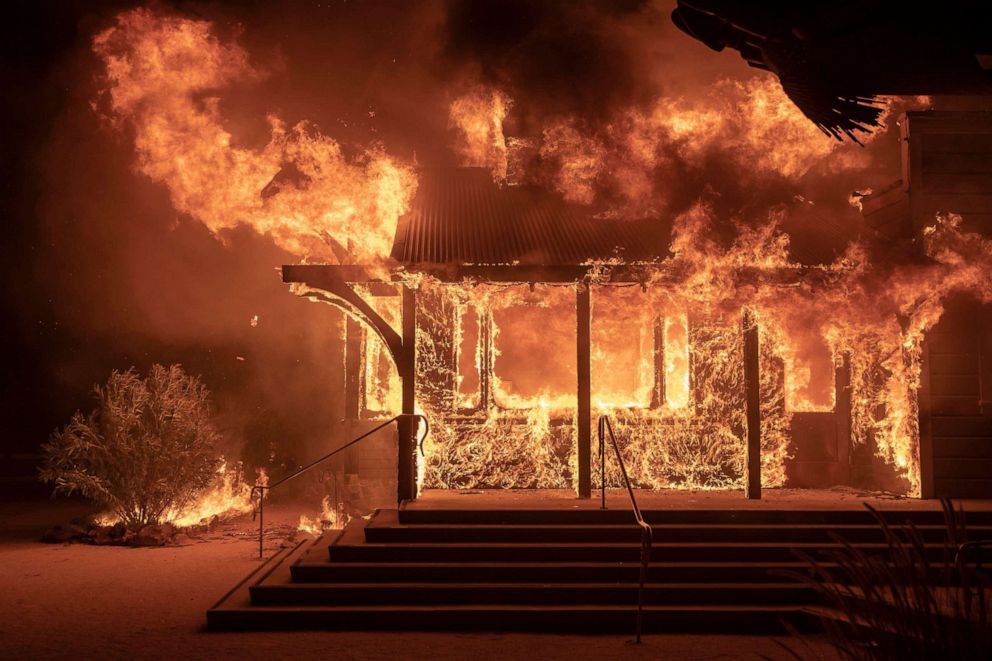 Meanwhile, firefighters continued to battle several blazes in Southern California on Sunday, the largest being the Tick Fire in Los Angeles County.

The Tick Fire, which started on Thursday afternoon near Santa Clarita, was 65% contained on Sunday after scorching 4,615 acres and damaging 27 structures.

Human remains were found in a burned area near Santa Clarita on Saturday, but a preliminary investigation suggested the person had been deceased for over a year, according to the Los Angeles County Sheriff’s Department.