A woman who died with her unborn child in a horror collision in Melbourne’s south-east is being remembered as an adored mother who would do anything for her kids.

Young mother Tess Clark was driving a silver SUV on Healesville-Koo Wee Rup Road in Pakenham South when a white utility collided head-on with her vehicle about 8am on Thursday.

The smash also left two toddlers injured and a man is fighting for his life. 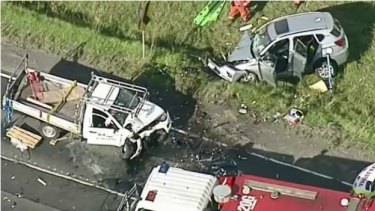 A mother and her unborn baby have been killed.Credit:Nine News

Loved ones said that the “bubbly, loving, energetic, strong” mother would have done anything for her children.

“It doesn’t feel real for any of us,” her partner Shane Clark, who is at home caring for his two young sons, told Nine News.

“Tess always put her family before her own needs. (She) absolutely adored her kids, and her kids adored her.”

The 34-year-old was flown to The Royal Melbourne Hospital in a critical condition with life-threatening injuries and has since died. 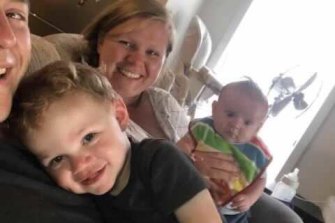 Members of the community have started a crowdfunding page to assist Mr Clark and the two children as they grieve.

“It is a way to slightly ease the burden on Shane and the boys at this unbelievably difficult time. All donations will go directly to Shane, Hunter and Archie, to build their future together,” the page said.

Two passengers in the woman’s car, both toddlers, were taken to The Royal Children’s Hospital as a precaution, a police spokeswoman said. Paramedics said they were both in a stable condition with minor injuries.

Ms Clark was just three weeks away from welcoming her unborn baby, ‘Asher’, into the world.

Detectives from the major collision investigation unit are now investigating and say the white utility collided with a number of other cars before the collision, causing minor damage to those vehicles.

The man, who was the only person in the utility, was flown to The Alfred hospital and was in a critical condition on Friday.

A total of five people, including another person taken by road ambulance to Dandenong Hospital, were treated by paramedics at the scene.

The road was closed for some time on Thursday.

Anyone who witnessed the collision or with dashcam footage is urged to contact Crime Stoppers on 1800 333 000 or submit a confidential report at www.crimestoppersvic.com.au.