Captain Sir Tom Moore made national headlines with his fundraiser to help NHS charities in recognition of the treatment he received. His 100th Birthday Walk around his garden using his zimmer frame broke Guinness World Records and led to him being knighted by the Queen in July. The World War 2 veteran, known affectionately as Captain Tom, recently revealed more about his past on ‘Piers Morgan’s Life Stories’ last weekend and was showered with compliments online. Some claimed he was “the best thing to come out of 2020 so far” and others declared him an “absolute legend and hero”. Despite the praise, his fundraising efforts came under fire from those who feared the mismanagement of donations and an investigation was launched.

When Captain Tom launched his fundraising on JustGiving, he had a modest target of reaching £1,000 – little did he know it would soon rise into the millions and make him a national hero.

In a touching moment, during an interview on BBC Breakfast he became a figure of hope and inspiration during lockdown when Naga Munchetty asked him about the challenge of coronavirus.

He said: “Tomorrow is a good day, tomorrow you will maybe find everything will be much better than today.”

From there, Piers Morgan donated £10,000 to his cause and more flooded in until it concluded with more than £32,796,357 in online donations.

One of his daughter’s Hannah Ingram-Moore, who worked for consultancy firm Maytrix, helped to promote the thoughtful fundraiser online – but soon they drew criticism.

In a press release, which they later posted to their blog, they revealed Captain Tom’s hopes for the fundraiser and the experiences that led him to embark on the walk back in April.

They wrote: “Having been inspired by the amazing treatment he received and continues to receive after falling and breaking his hip in 2018. 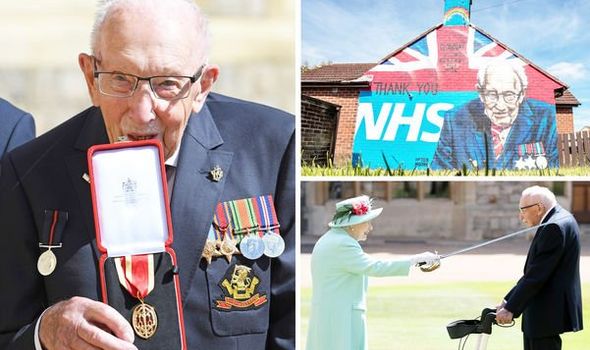 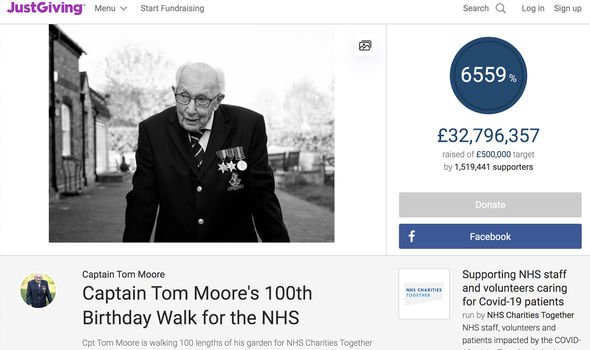 “Also recovering from skin cancer of the head, he decided to try and raise some money before his 100th birthday for our incredible national frontline and support health workers.”

They detailed his goal to walk 100 lengths of his 50-metre-long garden and that they would “donate 100 percent of funds raised to NHS Charities Together”.

But soon after his remarkable feat, a number of messages circulated over WhatsApp and online, which falsely claimed that the family of Captain Tom or Maytrix Group Ltd were profiting from the fundraiser.

The allegations were denied and Full Fact, an independent fact-checking charity, conducted a report of their own.

JustGiving reported that neither the Maytrix Group nor the family would receive any money from the fundraiser – which went to NHS Charities Together and small fees for the site.

The role of the company that Captain Tom’s daughter worked for was explained to be solely to help get his story into local press and a donation of £1 per length the war hero managed.

Full Fact also countered claims that the site JustGiving was receiving “a large sum” or “£2million in commission” from the fundraiser – and stated that a one percent charge was taken as will all fundraisers, which is spent on maintaining the site and team. 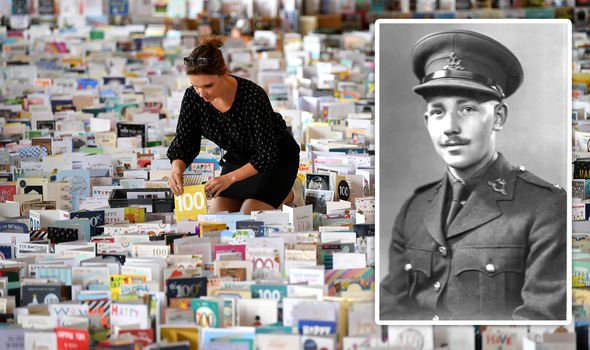 At that rate it meant that at least £320,000 would be kept by the fundraising site – of the more than £32million raised.

In April, before the final sum was understood JustGiving told Full Fact: “We will not be claiming £2m from the appeal, after deducting our processing fees, over 97 percent of the total raised will go straight to charity.

“Our processing fees cover charges set by external card providers, as well as the costs involved in processing millions of donations through our platform.

“97 percent of all funds raised by Captain Tom will go directly to NHS Charities Together, as with any other charity fundraiser on JustGiving.”

JustGiving also were reported to have donated £100,000 to Captain Tom’s fundraiser.

Reuters also conducted their own investigation into where the funds were going and concluded that the same findings.

Ahead of Piers Morgan’s interview with Captain Tom on Sunday (Sept 13) a TV insider told the MailOnline: “Like the rest of the nation, Piers was in awe of Sir Tom’s fundraising… [and] feels great pride in what Tom achieved

“In the dark days of lockdown, it was everyday heroes, not celebs, who brought joy to the nation.

“So while it’s normally scandalous figures who make the best episodes on his show, Piers knew Tom’s extraordinary, inspiring story would be a big draw.”