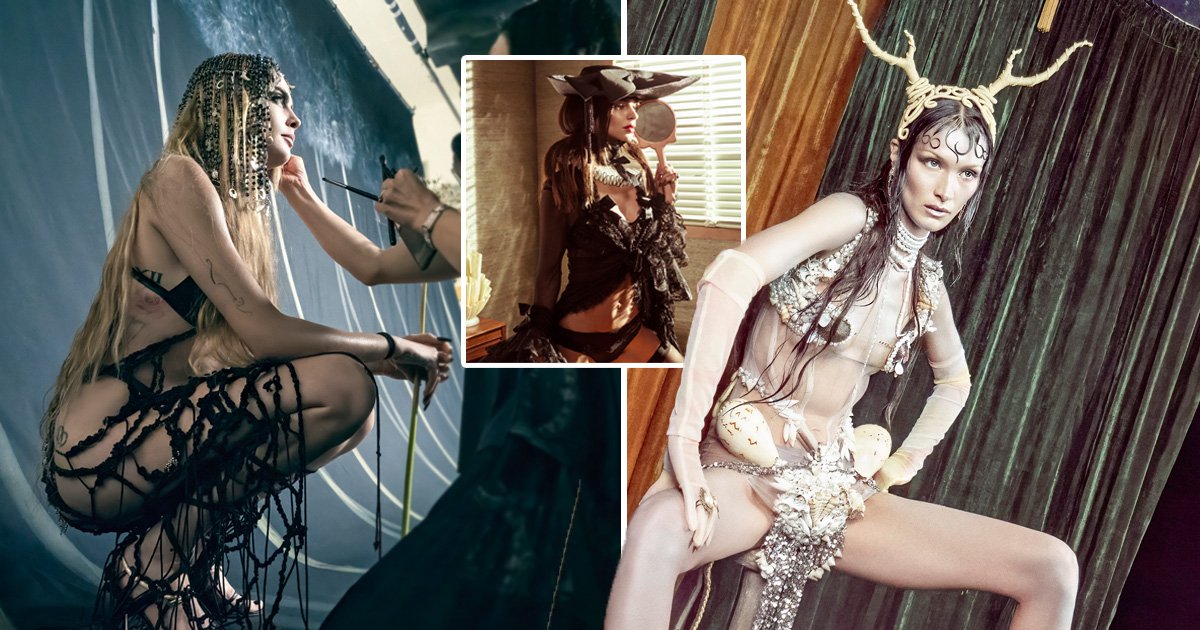 Prepare to see Bella Hadid, Cara Delevingne, and Emily Ratajkowski as you’ve never seen them before.

The models teamed up with the likes of Karlie Kloss and Precious Lee, Kaya Wilkins, and Lila Moss for an über glam shoot for Pirelli’s 2023 Calendar.

Photographed by Emma Summerton, a series of stunning behind the scenes shots offer a glimpse of what’s to come, as the calendar captures the importance of the environment to an eco-conscious generation.

Known and trademarked as The Cal, The Pirelli Calendar has been published by the Italian tyre manufacturing company each year since 1964.

The Cal took a break due to the pandemic in 2021, but came back with a bang for 2022, with names including Jennifer Hudson, Rita Ora, Cher, and Grimes modelling.

For 2023, some of the hottest names in modelling will grace the pages in a series of sexy shots, marking the first time since 2015 that the calendar has been exclusively dedicated to models.

In her first appearance in the calendar, British model Cara looks gorgeous in a barely-there ensemble, wearing a leather bra and skirt made from rope.

The runway star wore a beaded headpiece and posed in front of a makeshift bamboo backdrop.

As for Bella, the Victoria’s Secret angel went for a beachy look with a seashell-encrusted bodysuit.

Making her Cal debut, Bella’s hair was styled into effortless waves to give that ‘fresh out the sea’ vibe, while the look was finished off with a quirky antler-style headdress.

Meanwhile, Emily donned a black lacy ensemble as she delivered a series of sultry poses in a bedroom, mirror in hand.

She stared straight down the lens and worked her magic in the period-inspired setting, oozing confidence in a black underwear set, stockings, and dramatic hat.

As for Karlie, BTS shots show the blonde against a geometric mirrored background, wearing a sheer trousers and a pair of epic glittery boots.

Elsewhere, Guinevere Van Seenus was joined by a taxidermy owl for her shots, while Precious lay beside a painting of a blue tulip in a series of powerful poses.

Returning for her second calendar was Adwoa Aboah, whose look was giving glam Egyptian goddess as she lay before a desert backdrop.

Everything about Adwoa – who was first selected for the calendar after her diversity speech at the 2019 Fashion Awards – screamed luxury, including the reflective strapless gold gown and statement necklace.

Another familiar face included Ashley Graham, who lay on a green leather couch in a dimly lit room, posing in a satin number.

Pirelli said the concept of the shoot is for the models to take on the role of ‘imaginary and archetypal characters that inspired the photographer throughout her life’, with featured stars ranging from ‘singers, actresses, artists, activists, painters and many other women’.

In an interview with the company, photographer Emma explained that she wanted her calendar to focus on ‘powerful, inspiring women.’

She shared that the 14 chosen models for 2023 were based on their interests and values outside of their modelling world.