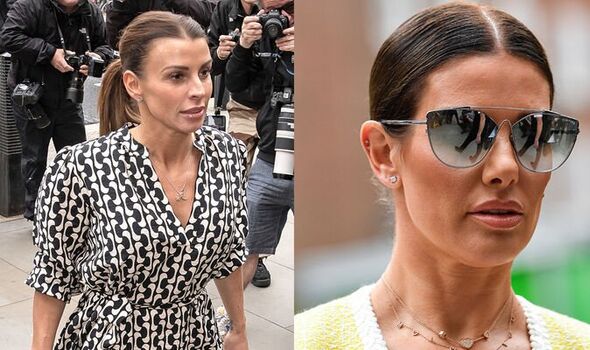 The WAG, who is married to former England star Wayne, has finished giving evidence at London’s High Court where she is being sued by Vardy for libel. In October 2019, Rooney published her now-infamous Wagatha Christie post accusing Vardy, 40, of leaking information from her private Instagram account to the press, which she denies.

The trial, which started last Tuesday, previously heard Vardy called Rooney a “c**t” in messages with her agent Caroline Watt.

In another message, Vardy calls someone a “nasty b*tch” – a comment she denies was about Rooney.

Giving evidence this morning, Rooney, 36, said: “She has got no need to talk about me or my Instagram. I wouldn’t even know what Caroline Watt looked like. I have never spoken to her, never met her.

“The messages that went on between them were evil and uncalled for. Speaking about someone they do not know.

“I’m the total opposite to what they describe. I’m not a bad person. The words they use are totally untrue. There’s no need for it because I have never done anything to them for them to monitor and stalk me.”

Hugh Tomlinson QC, for Vardy, asked Rooney if she was “delighted” with the reaction to her post.

She replied: “To be honest with you I have hated every minute.”

Asked about images on her phone of Vardy mocked up as a villain from children’s cartoon Scooby Doo and herself photoshopped onto the cover of an Agatha Christie novel, Rooney said: “I have never done anything with them, they have stayed on my phone.

“I have never craved press attention in my life. I am not one to draw attention to myself. I never have been, I never wanted to. I could have posted these and done something with them. But people sent them to me, they were on my phone.”

Rooney was also asked why she did not confront Vardy privately about her suspicions when Vardy messaged her in February 2019 asking if she had unfollowed her.

In a message, Vardy said: “I saw you had unfollowed me and I wasn’t following you anymore on Instagram…just wanted to ask if I had done something or offended you in anyway? Literally only noticed the other day.”

Rooney said: “Personally I would not go out of my way and message and say ‘have I done anything to offend you?’ I would just think it’s an acquaintance through social media or through a message now and again, so I wouldn’t do that. I felt it was suspicious.

“I wasn’t going to get this opportunity back. I know it sounds a bit tough but, at that time, I didn’t think she would tell the truth anyway if I confronted her.”

Rooney, who wed Wayne in 2008, admitted telling a “fib” that one of her children may have accidentally unfollowed Vardy while using her phone.

She said: “I thought I had gotten away with it.”

Mr Tomlinson told the court Rooney’s sting was a “serious and concerted operation”, with around 50 posts being put up on the private Instagram story between August and October 2019.

He said that, on some days, Rooney uploaded between five or six stories to her account.

Rooney said: “It was definitely not 50, not that I can remember. Some days [I posted] more than others. I did that so it looked like I was doing a regular story update.

“I don’t do a story at all then I might do a few depending on where I am or what’s going on in my life.

“At the time of doing it, it was important but I feel, in the public, it has been made out a lot bigger than it was. But it worked for me and I found out which account was doing it at the end of it.”