In the wake of his dismissal from Megadeath, the veteran rocker claims to be working with Scottsdale Police Department in their investigation into charges regarding revenge pornography.

AceShowbiz -Rocker David Ellefson has broken his silence following his dismissal from Megadeth, insisting he’ll be filing a defamation suit against the person who leaked sexually explicit photos and video.

The bassist was axed from the band earlier this week (beginning May 24), following the leak and allegations suggesting he had been grooming a fan for sex, which he vehemently denies.

“Recently, a very private video was illegally posted on the internet and false allegations were made against me,” Ellefson says in a statement obtained by Rolling Stone. “The actions in the video were between two consenting adults and were recorded without my knowledge.”

“I am working with Scottsdale Police Department in their investigation into charges regarding revenge pornography to be filed against the person who posted this video. Also, my lawyers are preparing a defamation lawsuit to be filed against this person. This person will be prosecuted to the fullest extent of the law.”

The rock star adds, “I am taking this time to be with my family. I wish my bandmates the best with their upcoming tour.”

Megadeth frontman Dave Mustaine announced the band’s decision to sever ties to the bassist, who first joined the group in 1983, on Monday, stating, “While we do not know every detail of what occurred, with an already strained relationship, what has already been revealed now is enough to make working together impossible moving forward.”

“We look forward to seeing our fans on the road this summer, and we cannot wait to share our brand-new music with the world. It is almost complete.”

Earlier this month, Ellefson shot down allegations of grooming an underage girl for sex, insisting “private and personal conversations and interactions” with a third party were released with “ill intention”.

The rocker took to Instagram and shared a screenshot of a statement from the woman involved, who insisted she was not underage and the story had been taken out of context.

He wrote, “As much as it’s not something I’m proud of, these were private, adult interactions that were taken out of context and manipulated to inflict maximum damage to my reputation, my career and family. The other party involved has made a statement… I thank her for doing so and hope that this clarifies that the situation was not at all as presented.”

The statement from the woman involved reads, “Im the girl people are talking about in the posts about David Ellefson right now and I just want to tell my side of the story because people are sharing misinformation and the situation is getting out of hand without the truth being out there [sic].” 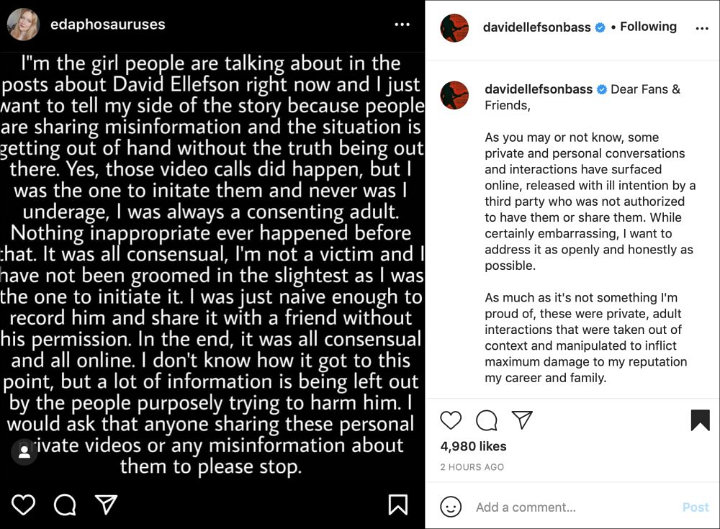 The woman involved in David Ellefson’s leaked sex photos and videos spoke out.

“I would ask that anyone sharing these personal private videos or any misinformation about them to please stop.”