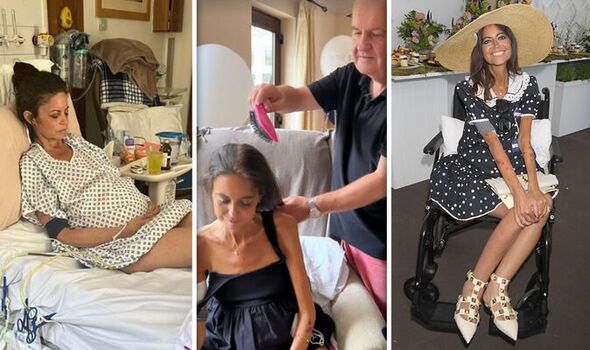 Deborah posted a Father’s Day tribute to her dad Alistair.

Dame Deborah James, 40, has shared a heartfelt tribute to her father alongside a photo of him brushing her hair.

She admitted that she “no longer has the strength” to do it herself.

The BBC podcast host is receiving end of life care at home after bravely battling bowel cancer for six years.

“Happy Father’s Day! Yes my Dad is brushing my hair becuSe I have no strength anymore to brush this,” (sic) wrote the mum-of-two.

Despite her declining health, selfless Deborah has thrown herself into fundraising for various cancer charities, with her Bowel Babe fund reaching an incredible £6.7million.

She also revealed the t-shirt she created with In The Style has now raised another £1million.

She admitted she no longer has the strength as her health declines.

Dame Deborah was given days to live a month ago

She has been tirelessly raising money for charity since her cancer treatment ended.

Her Bowel Babe fundraiser has reached a whopping £6.7million.

She recently reflected on her devastation that she would never get to see her son become a father.

She called the day “really special” and revealed she won three bets.

Ruth called her an “incredible woman” in a heartfelt post afterwards.