Demi Lovato Teased New Music After The Capitol Riots, So Get Ready 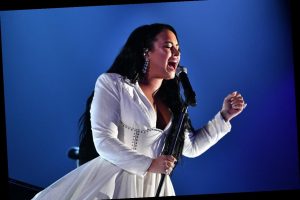 Demi Lovato is once again getting vulnerable. After violent rioters and supporters of President Donald Trump stormed the U.S. Capitol on Jan. 6, Lovato was among the many celebrities to express anger and frustration at the attempted coup. On Twitter, Lovato wrote about a desire for “change in the country” while sharing a message from the official Black Lives Matter account. She also teased what Lovatics often long for: new Demi Lovato music.

“My heart is broken,” she wrote. “It makes me sad to believe how naive I was to think this couldn’t possibly happen, and yet it did. Here we are. For everyone in my comments saying ‘where’s d7’ or wanting me to sing instead of speaking up about what needs to change…”

“THIS IS WHY I POST AS MUCH AS I DO. THIS IS WHY I CARE. THIS CANNOT HAPPEN ANY F*CK*NG MORE. I’m angry, embarrassed and ashamed,” she said. “I’m in the studio working on something special after today’s assault on democracy. #impeachtrumptonight.”

The update comes as no surprise considering Lovato regularly uses her platform to speak up about politics. In October, she released a new song and music video for “Commander in Chief,” which directly criticized Trump and his harmful policies and rhetoric.

The lyrics read, “Commander in Chief, honestly, if I did the things you do I couldn’t sleep. Seriously, do you even know the truth?” Following its release, she encouraged fans to vote in the presidential election and later reiterated the importance of Georgia’s Senate race.

And while her special new song will likely take on a sharp, impassioned tone, Lovato recently shared a message of hope during a New Year’s Eve special on YouTube. “Allow the light and the feeling of freedom and trust to enter the collective consciousness. That 2021 is going to be a year of great, new beginnings,” she said. “You made it, we made it. Here’s to a happy 2021. Namaste, b*tch*s!” Namaste? Sounds like an excellent song title.