Worst houseguest ever? Ed Sheeran is opening up about his unlikely friendship with Courteney Cox and the bizarre gifts he leaves for his friend when he stays at her home.

The 30-year-old British musician said that the first time he visited Los Angeles, he was brought by a mutual friend to stay at Cox’s home.

“She loves music, she’s jamming all the time. She picked up the guitar. But she was like, ‘Anytime you want to stay, let me know,'” Sheeran shared of the Friends star. “And then literally every single time I’ve been back to Los Angeles since then, I’ve stayed there.”

The two stars have become close and Sheeran revealed that he was the one to introduce Cox to her boyfriend, Johnny McDaid.

Because of their bestie vibe, Sheeran decided to play a bit of a prank on Cox.

When the package Sheeran had ordered arrived in Cox’s name, her assistant found it.

“She opened the post and finds this mask and instantly goes, ‘I don’t think I was meant to see that.’ She leaves it on Courteney’s bed and Courteney comes up and she goes, ‘Where did this come from?'” Sheeran shared, laughing. “She found out the story, and now every time I go back there I order another gimp mask. She has maybe 12. I hide them in people’s bedrooms. They’ll go in a drawer and find this leather S&M mask.”

Sheeran took it a step further, adding, “She had two people come look at her piano to come and buy it, two absolute strangers come into her house that I found out about. So I left a couple of masks on the piano.” 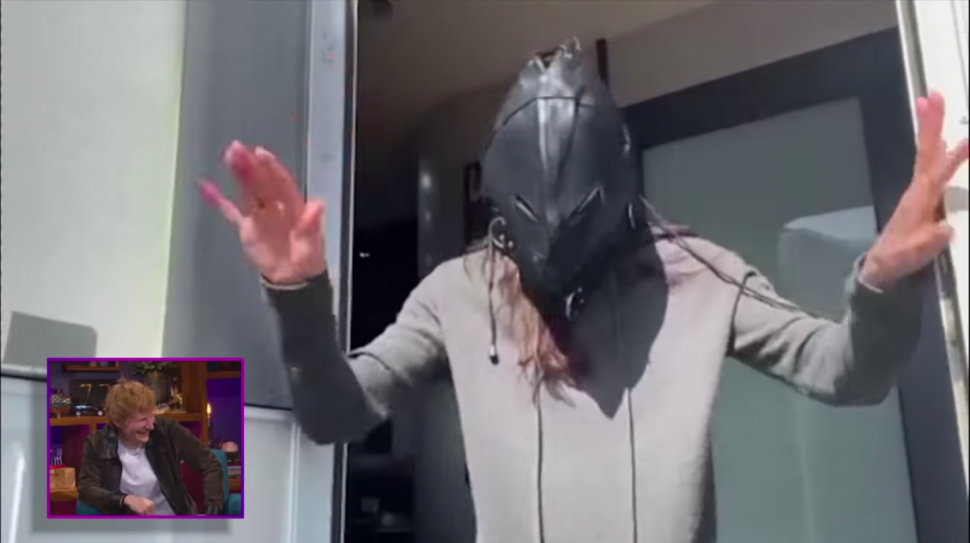 Cox took the prank in stride, sharing a video of herself on set in the mask for Sheeran’s 30th birthday.

The pals recently jammed out to Phoebe’s “Tony Danza” song and also did Monica and Ross’ dance “routine” for Instagram.

Watch the clip below for more: