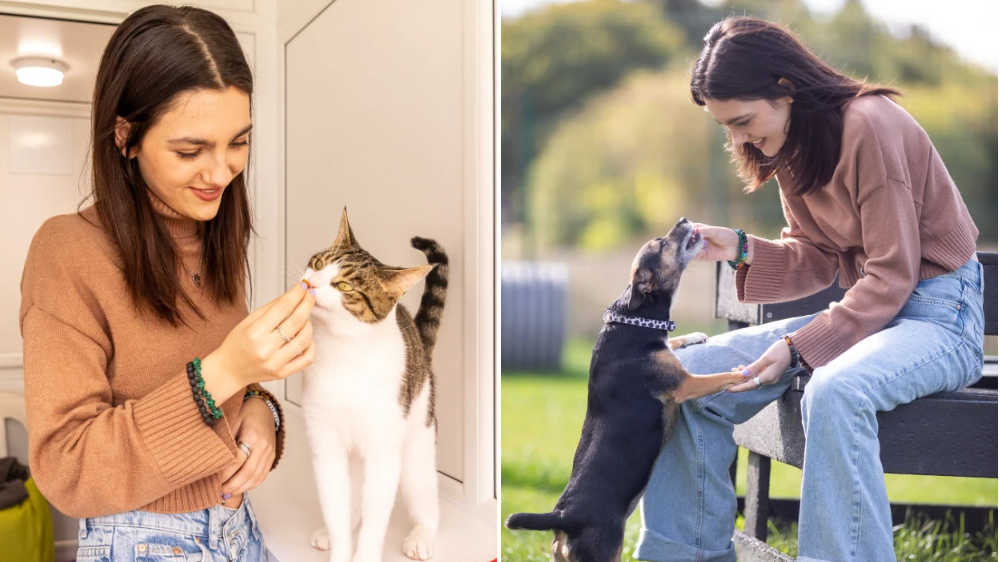 If you’re having a stressful time at the moment and need some wholesome content to make you feel better, we’ve got just the thing.

House of the Dragon star Emily Carey recently visited the Blue Cross re-homing centre and, honestly, the pictures are too cute for words.

The TV star met both fury friends and members of staff at the centre in Kimpton, Hertfordshire, in celebration of the animal charity’s 125th anniversary this year.

Emily, who starred as Alicent Hightower in House of the Dragon’s first part, formed a bond with adorable cats Monty and Squid during her visit, and got to feed and play with them.

Squid was extremely fond of Emily, after he was taken into the centre as a kitten when a member of the public rescued him after finding him in a van engine at nine weeks old.

The star, who got their big break appearing in BBC’s Casualty, also looked in their element as they took two of the dogs for a walk in the fields – an 11-year-old husky cross named Carlie, and a seven-year-old terrier mix called Tilly, who are both looking for new homes.

Resident dog Carlie was previously re-homed, but was returned by her owner after ill health meant they were no longer able to care for her, so she’s hoping someone else will scoop her up sometime soon.

And it seems the animals were a big fan of Emily’s too, as they didn’t shy away from cosying up to her – do they play House of the Dragon at the centre, we wonder?

Her appearance at the Blue Cross centre allowed her to speak to the workers about the vital work that they do for the charity, providing care for sick, injured, and homeless pets.

Blue Cross has been helping pets in need for over a century, and now with four animal hospitals, five pet care clinics, and 11 rehoming centres in the country, their selfless care for vulnerable animals has changed lives, which Emily got to witness first hand.

The 19-year-old actor described her visit as ‘wonderful’ and it’s clear she’s an animal lover, as she herself owns a cavapoo called Dottie.

‘I love pets and am so grateful to have my dog Dottie in my life and to have been able to visit Blue Cross’s Hertfordshire rehoming centre to see their work first hand, I am also extremely grateful to them for all they do to help pets,’ she said.

‘The pets I got to meet all had their own stories, and it’s wonderful to know that Blue Cross were able to step in to help when they needed it.

‘Walking Tilly and Carlie was amazing, I’m so happy to have met them and had the opportunity to spend some time with them before they make their next step to live happy lives in new homes.’

As for their work on the Game Of Thrones spin-off, Emily has gained a whole host of fans after the series gained plenty of traction online.

In fact, the star admitting to finding comfort in a classic toy to cope with all the chaos – yup, it’s Lego.

‘Inside these four walls of my little flat, nothing has changed,’ Emily told Elle in September.

‘I went out to buy sweet potatoes yesterday. It was the first time I’d left the house since the show had come out, had a mask on, was picking up a reusable produce bag and filling it with sweet potatoes, and someone was like, “I love House of Dragon!” And I was like, “Oh, cool.” I kind of forget that I’m in it, I guess.’

‘On buses and billboards, I step outside my house, and the bus stop is like, House of the Dragon. It’s overwhelming. It’s intense. I’ve been building a lot of Lego to cope,’ she continued.

After starring in the show’s first part, Emily would love to return, but is unsure whether it could happen due to the secret nature of the show’s production.

House Of The Dragon is available to stream on NOW.