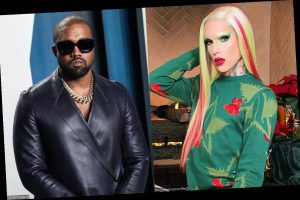 In a YouTube video, the beauty guru, who claims that he’s single, also pokes fun at the conspiracy theory that the rapper’s wife Kim Kardashian’s mom Kris Jenner is actually behind all these rumors.

AceShowbiz –Jeffree Star has shut down rumors of him hooking up with Kanye West once and for all. On Thursday, January 7, the beauty guru took to his YouTube channel to address the bizarre rumors involving himself and the husband of Kim Kardashian.

In a video titled “Addresing the Kanye Situation”, Jeffree recalled asking his cameraman Chris, who just flew to his new home in Wyoming, “I woke up and my phone was blowing up and I’m like, ‘Oh my God, what in the scandal is going on today?’ I honestly had no idea, right?… I’m keeping to myself. I’m living in this beautiful state. I’m loving life.”

“I got a million texts today, phone calls from news outlets,” he went on saying, before calling the reports about his alleged affair with the “Jesus Is King” artist “the dumbest s**t I think I’ve read in my entire life.”

Confused, Jeffree wondered, “How do we even get to this moment, like, how would that even be made up? Because we both live in same the state?” Kanye is currently residing in his ranch in Wyoming, allegedly taking some time off from wife Kim after his failed presidential run.

“I guess some girl made up a whole lie on TikTok, and it went ‘viral,’ where she insinuates Kanye and Kim are getting a divorce because a big male beauty influencer is sleeping with him,” the YouTube personality said of TikToker Ava Louise. Shutting down the speculations, Jeffree clarified, “Let me just say this one time for any news outlet: I like very tall men. Me and Kanye have never hung out, and this whole thing is really funny.”

“I guess if this is a start to my new year, happy new year! I really can’t!” Jeffree, who claimed that he’s single, continued. Before ending the segment, he also poked fun at the conspiracy theory that Kim’s mom Kris Jenner was actually behind all these rumors, saying, “And if Kris Jenner organized this whole thing, happy new year, sweetie girl!”

The wild rumors between Kanye and Jeffree started after Ava shared in a Wednesday video, “I feel like I can spill the tea that I’ve been holding onto for months.” Weighing in on reports that Kim was preparing to divorce the rapper, she went on to say, “This whole divorce comes as no surprise. Kanye has been hooking up with a very famous beauty guru–MALE beauty guru. A lot of people in the scene have known it for a while.”

Jeffree himself had a cheeky response to the rumors prior to posting the YouTube video. Laughing off the rumors, he wrote on social media alongside some snaps of himself in a pink bathrobe, “I’m ready for Sunday Service.”