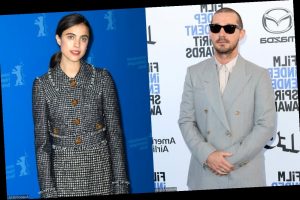 Words on the street are the ‘Once Upon a Time in Hollywood’ actress wants her focus to be on her acting career, and was aware of the ‘backlash’ she received for dating the ‘Transformers’ actor.

AceShowbiz –Shia LaBeouf and Margaret Qualley‘s romantic relationship has allegedly come to an end. A few weeks after he faced an abuse lawsuit filed by his singer ex-girlfriend FKA twigs, the “Pieces of a Woman” actor and the “Once Upon a Time in Hollywood” actress were said to have parted ways.

Revealing the former couple’s separation was PEOPLE. “They broke up on Saturday [January 2]. They’re just in different places in their lives,” the outlet quoted a source as saying. The insider also noted that the 26-year-old beauty focused mainly on her acting career, and she “is ready to get back to work.”

Meanwhile, another source told the outlet that Qualley was aware of the “backlash” she received for dating LaBeouf amid his abuse allegations. The “Transformers” star was sued by twigs on December 11, 2020. She accused him of physical abuse, sexual battery and infliction of emotional distress during their relationship. They began dating in late 2018.

Also addressing LaBeouf and Qualley’s breakup was another source who told Entertainment Tonight, “[Her] friends aren’t surprised that the relationship didn’t last. [She] was getting a lot of hate for dating [him] due to all the abuse claims and she couldn’t handle it. She didn’t want to risk her own career to be with him.” The insider added, “She really did like [the actor] a lot, but she is over it and knows she has to focus on her own future.”

The split report came after LaBeouf and Qualley were spotted together in Studio City, California on Monday, January 4. Before the January outing, the pair were caught holding hands during a post-Christmas hike on December 26. They were also photographed locking lips when the James Lort of “Honey Boy” picked up the daughter of Andie MacDowell at Los Angeles International Airport one week before that.

The two were unveiled to get together after starring in Rainey Qualley‘s NSFW music video, “Love Me Like You Hate Me” in early Fall of 2020. A source told PEOPLE, “They are both very passionate people. They are not dating, but have fun together. [She] is a social butterfly and has a big group of friends. She doesn’t really bring [him] around this group though. She is not interested in having a boyfriend.”