Justin Timberlake and Jessica Biel said “I do” — again!

The couple is celebrating their 10th wedding anniversary this year, and to honor the milestone, they renewed their vows over the summer in Italy, the same spot where they first tied the knot on October 19, 2012. Jessica shared the news on her Instagram Stories Wednesday evening, writing over a picture of them from the big day:

“From our vow renewal this summer. In Italy where it all went down (and in @giambattistavalliparis again!)”

In the snapshot, the 40-year-old actress dazzled in a white bridal gown from Giambattista Valli that was paired with a black belt tied around her waist while Justin rocked a beige linen suit, white shirt, and a fedora. You can ch-ch-check out their ensembles (below): 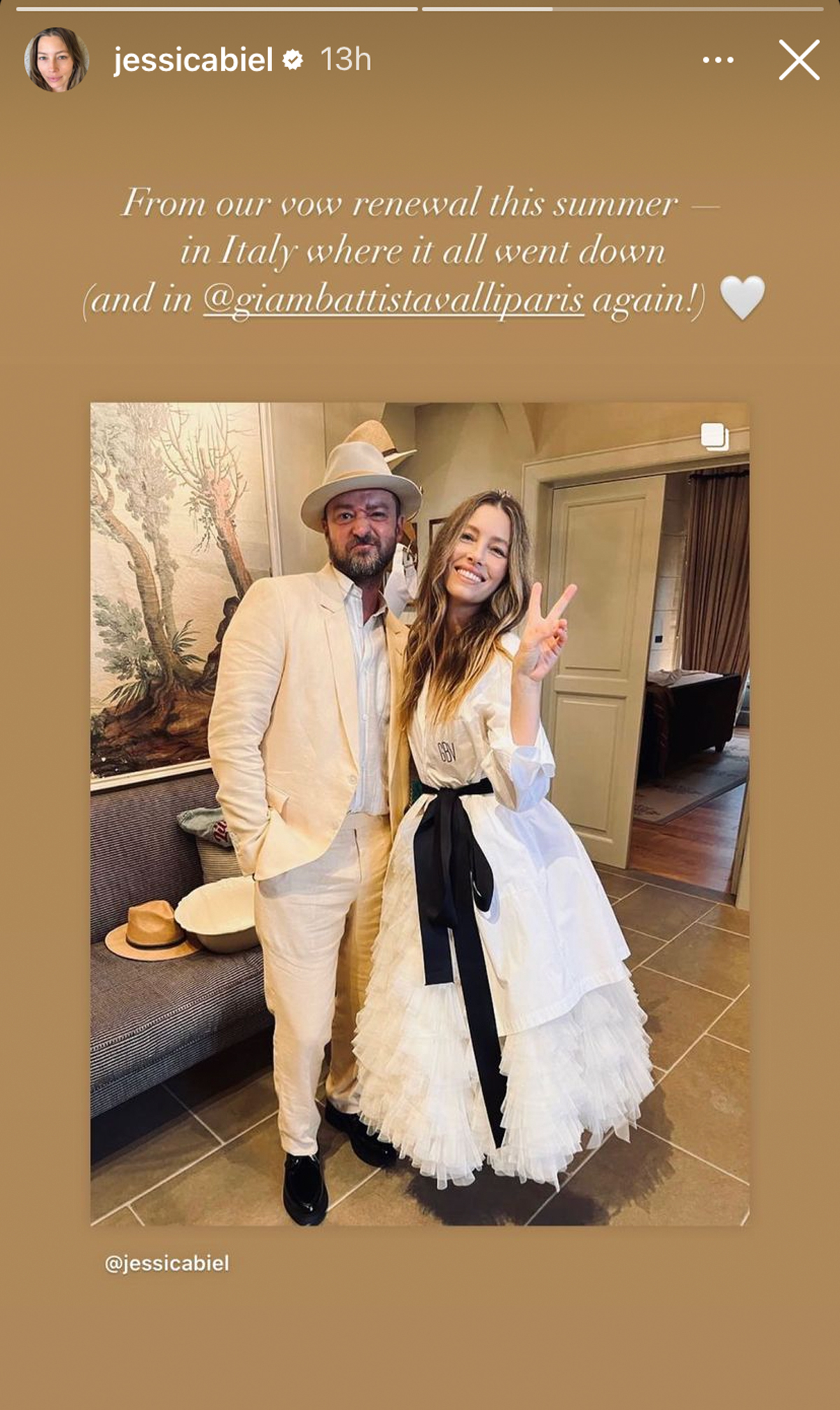 On the day of their anniversary, the lovebirds also penned some heartfelt tributes to each other on Instagram. Alongside a carousel of photos and videos of them together, Justin said:

“10 years ain’t enough! You make me a better husband and father every day! I love you so much you beautiful human! Run it back!”

Jessica shared the post on her Stories, adding “Ten years

” on top of the pics. And the sweet messages did not end there! Later, she expressed on the ‘gram how her marriage to the 41-year-old singer has been “the adventure of a lifetime.”

Awww! Not only is this renewal super romantic, it’s also a great second chance for JT to not break his vows! No infidelity starting… NOW. Ha!

In all seriousness, it’s nice to see that these two are still so in love with each other after all these years — even after the cheating scandal that plagued their marriage a couple of years ago. As you may recall, the SexyBack artist was caught holding hands with his Palmer co-star Alisha Wainwright at a bar in New Orleans back in November 2019. Paparazzi (that Justin must have been shocked to learn were there) caught the two looking very cozy, with the actress basically in his lap. Oh, and Justin wasn’t wearing his wedding ring at the time. Yikes… Despite the photo evidence of his encounter with Alisha, a source told People that Jessica “believes he didn’t cheat on her” at the time.

Following the messy situation, though, they seem to be doing better than ever! Jessica even opened up to Access Hollywood in April about her relationship with the NSYNC member, sharing she’s the “happiest” she’s ever been:

“I sometimes feel like 10 years has just flown by in the blink of an eye and other times I feel like: ‘Oh my gosh, 10 years, that’s a really substantial amount of someone’s life.’ I just feel really proud of it. We’ve had our ups and downs like everybody. I’m still the happiest, and loving my life.”

Clearly, no matter what happens, Justin and Jessica are in it for the long haul. Congrats to the couple on ten years of marriage!