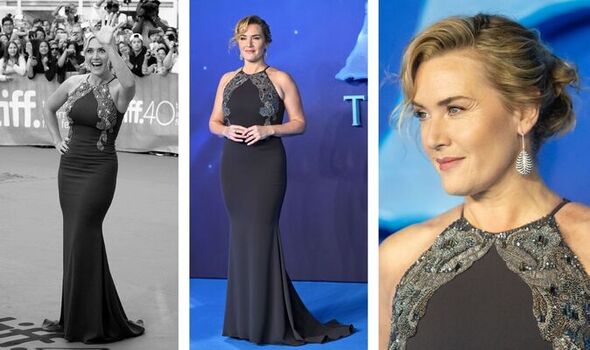 With a price tag of more than £944, perhaps it’s little surprise Kate Winslet was determined that her embellished dress wouldn’t be a one-hit-wonder.

Kate Winslet, 47, was celebrating the world premiere of her latest movie Avatar: The Way Of Water, in which she plays Ronal.

She showed up to the Odeon Luxe in London’s Leicester Square in a grey halter neck dress with an array of silver embellishments, and made it clear it was one of her favoured wardrobe pieces.

The star had worn a completely identical outfit, by the designer Badgley Mischka, at a premiere in Toronto for another of her celebrated films – The Dressmaker, way back in 2015.

It was clear from the sensational photos that her shapely figure, curvy hips and slender waist are just as stunning now as when she first slipped on the outfit.

Kate made her commitment to sustainable fashion clear in 2020, when she vowed in an issue of Vanity Fair that she’d recycle outfits in the years to come, rather than wastefully wearing them just once.

Kate Winslet was in town for the Avatar: The Way of Water premiere at London Odeon Leicester Square

Kate Winslet has pledged a commitment to sustainable fashion, helping the environment by wearing each of her favourite red carpet outfits more than once.

Kate Winslet taking her eye-popping dress on its first outing

This was the outfit that Kate Winslet chose to wear when publicising her 2015 film The Dressmaker at its world premiere in Toronto, Canada – and it certainly attracted the attention of the crowds there.

Kate Winslet’s figure has scarcely changed in almost a decade, as this updated photo in London last night of her wearing exactly the same dress demonstrates.

The designer had employed a cunning strategy with the shape of the dress, deliberately placing the sequin pattern in a way that would create the illusion of a slimmer waist for whoever wore it. Kate Winslet certainly looked sensational as she strolled down the red carpet in the beautiful number.

“I don’t like having to squeeze my hot-and-bothered mum-on-the-school-run body randomly into a red carpet dress that I’m never going to wear again,” she explained to the publication back in 2020, before vowing her days of one-hit fashion numbers were over.

Kate Winslet donned black leather leggings and a blazer for a photocall at London’s luxurious Corinthia Hotel in the run-up to the Odeon premiere – and still looked sensational.