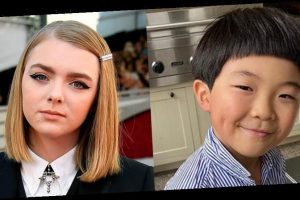 Alan S. Kim, the young breakout star of the upcoming movie Minari, has landed his next big role!

The seven-year-old actor will be starring in the upcoming movie Latchkey Kids alongside Eighth Grade actress Elsie Fisher.

Deadline reports that the “ark comedy follows Shae (Kim), a bright nine year old boy, who befriends an eccentric teenage girl (Fisher), looking to escape her troubling life that her mother has created for her, all the while the local enforcement believe the boy might be offing his babysitters.”

The movie will be directed by John J. Budion with a screenplay by Meaghan Cleary.

Alan and Elsie have something in common as their breakout movies both premiered at the Sundance Film Festival. Make sure to look out for Minari in the awards seasons mix this year!